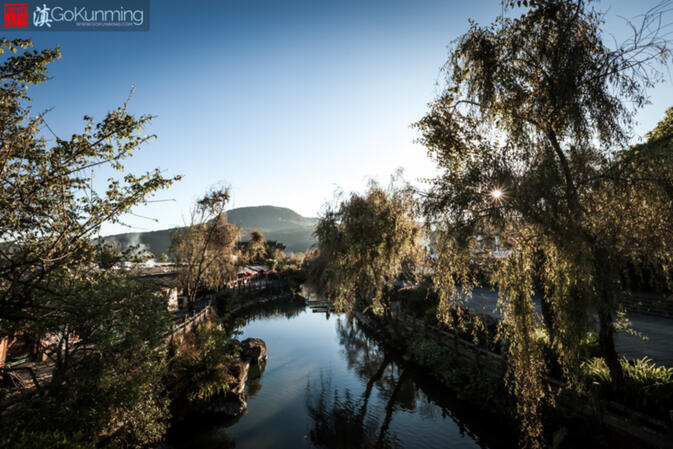 Heshun (和顺) is located in southwest Tengchong County (腾冲县) in the far west of Yunnan. It was once an important stop on the Ancient Tea Horse Road. Today, it remains one of the better-preserved old towns in the entire province. 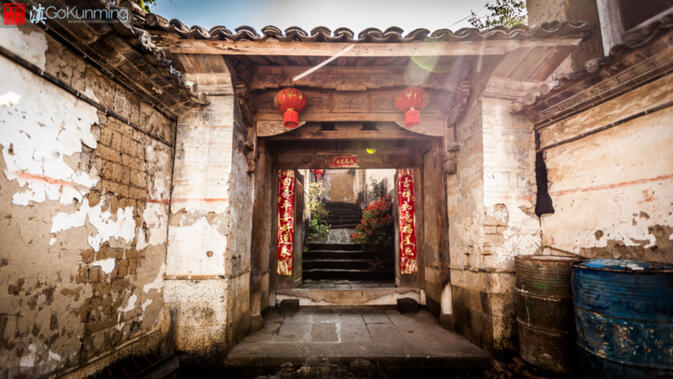 Up until the mid-twentieth century, you might still see the occasional tea, pony or jade porter making their way to Tibet or Burma. But in recent years — especially since the 2010s — visitors are more likely to see fellow tourists perusing the town's quaint shops. 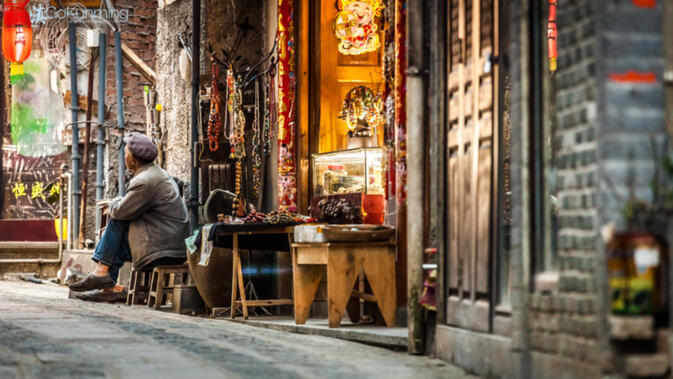 Near Heshun's main northern gate, is a modest bar street — a common sight in many 'old towns' in China these days. But it is instead the town's natural and cultural assets that are truly worth the trip. 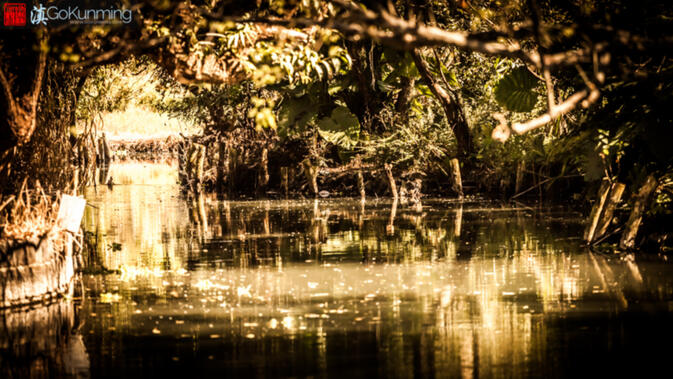 A short distance from the bar area, in the northeast corner of town, are enchanting and thoroughly wild patches of wetland. 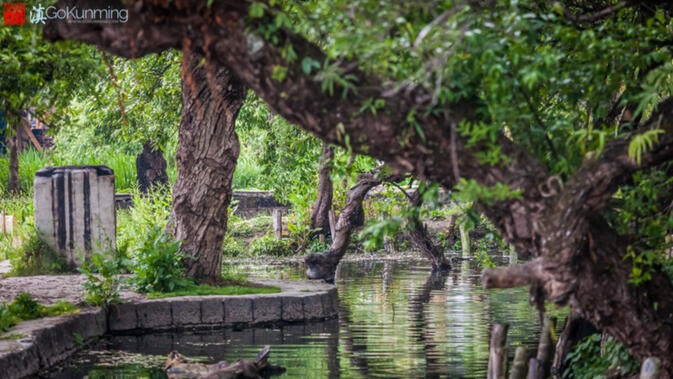 Another aquatic feature of this sleepy river town is the small artificial lake situated in Heshun's southeast. 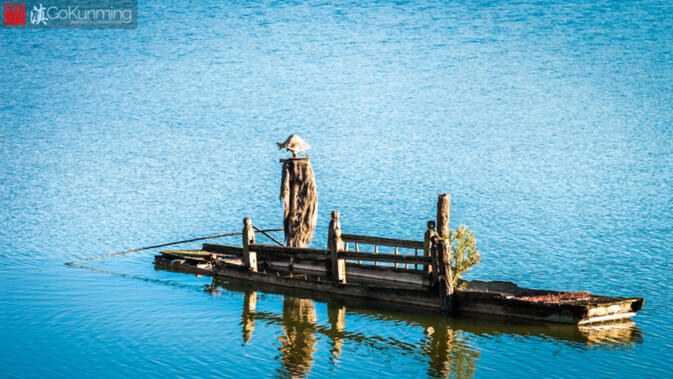 On the southern end of the lake is the photogenic Yuanlong Pavillion (元龙阁), first constructed during the reign of the emperor Qianlong during the Qing Dynasty. 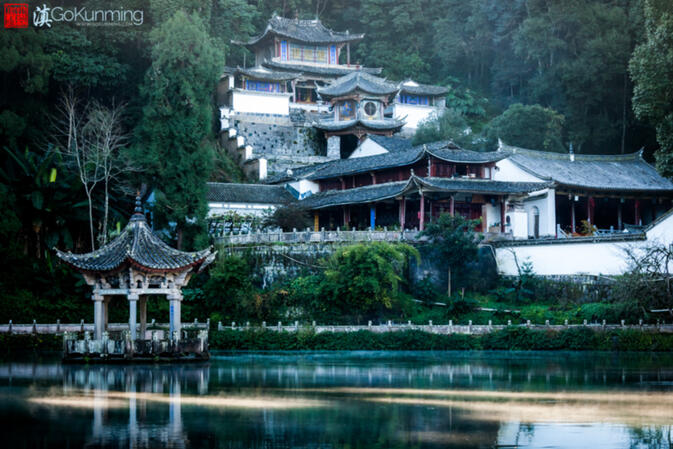 You may see the occasional luxury German car in Heshun, but the scenic old town — which costs 80 yuan to enter — is free of cars. Before the automobile, porters plying the ancient trade routes would carry 70 to 90 kilograms at a time along the 2,000-kilometer path to Lhasa, or on a shorter yet no less daunting trek across rolling green mountains to Mandalay. 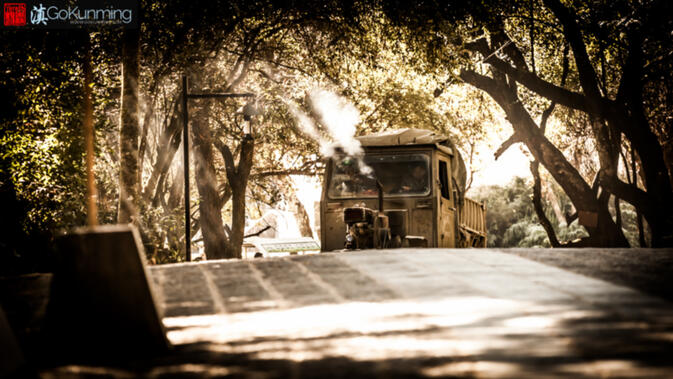 For 400 years, Heshun has been the 'hometown of overseas Chinese'. Its current population is just over 6,000, but the vast majority of Heshun natives live overseas, most of them in Myanmar, which is only 70 kilometers away. 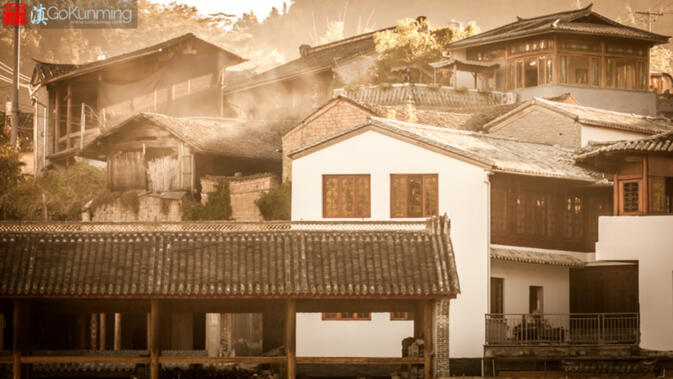 The village's name has gone through several incarnations during its 600-year history. Heshun was originally known as Yangwendun (阳温墩), meaning 'a place that is not too warm'. Later on, its name was changed to Heshun (河顺) — meaning 'along the river' — because of the stream that meanders around the village. This was eventually altered to Heshun (和顺), which is derived from the ancient Chinese expression shiheminshun (士和民顺), meaning roughly 'the officials are modest and the people comply'. Each of these titles capture different qualities of the town, all of which are still very much present in this serene village. 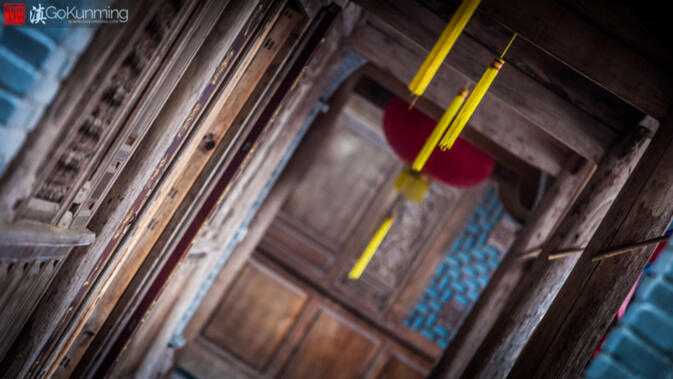 The old town looks much like it did during the Ming and Qing eras. Although foreign architectural influences can be observed — most notably in the homes built by overseas Chinese — the majority of buildings have decidedly Han characteristics. 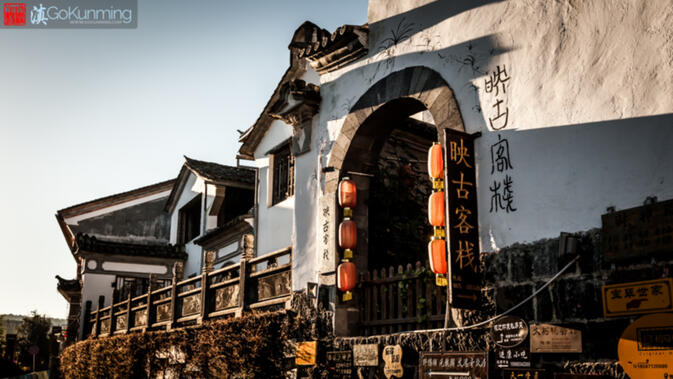 The predominance of this style is due to the fact that Heshun was established as a trading and military outpost during the reign of Ming dynasty emperor Zhu Yuanzhang (朱元璋). As part of the government's 'border cultivation' program, Han Chinese were brought from China's central provinces to solidify the Ming presence at a time when Yunnan was a distant frontier. Strolling around town, it is quite apparent that Heshun's Han settlers stayed true to their roots. Throughout the town, three varieties of memorial archway advocate traditional Chinese virtues. The first, represented by the Baisuifang Gate (百岁坊) — literally 'Hundred Years Gate' — is a symbol of longevity and filial piety. 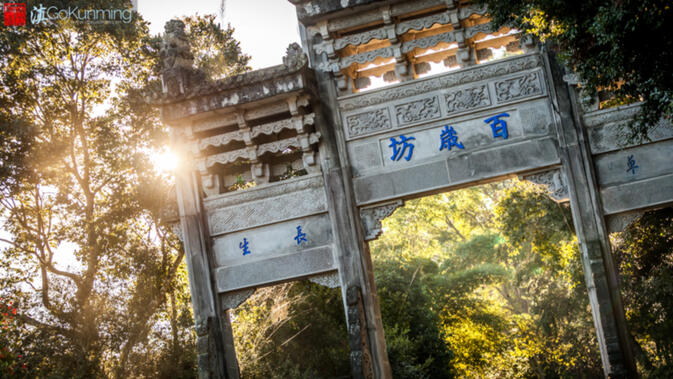 Another gate commemorates chastity. Local women saw this as particularly important, because their husbands would venture away from the village for years or even decades at a time to do business abroad. 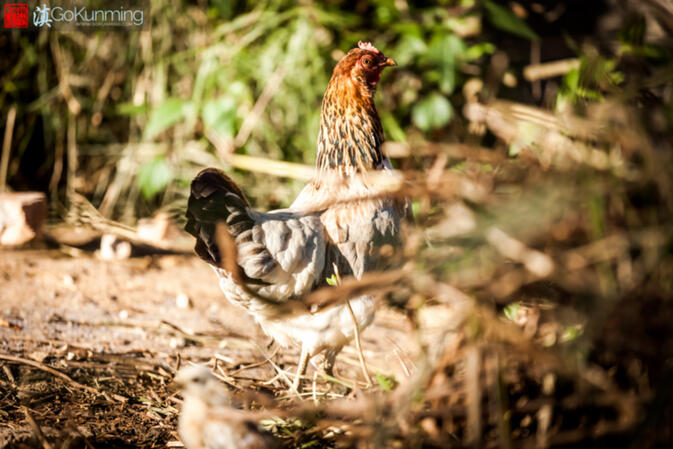 The third kind of archway celebrates fengshui, and advocates for the protection of cultural symbols. It also reminds locals of important Confucian principles such as benevolence. 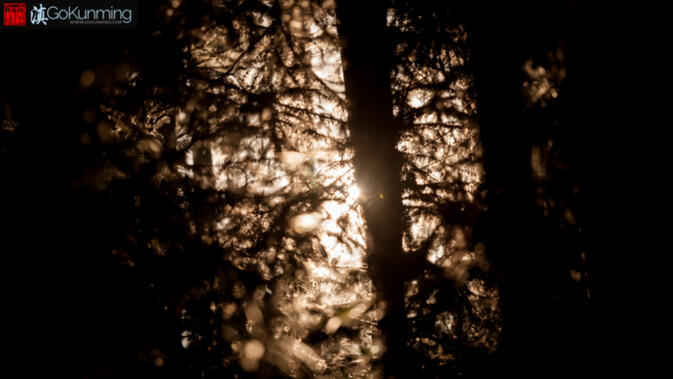 Another central tenet of Confucianism is respect for ones ancestors, which is why Heshun has eight intact ancestral halls (宗祠). Many of China's ancestral halls were destroyed during the Cultural Revolution, but several in Heshun were spared, possibly due to the region's relative isolation. Another endearing characteristic of the old town is that it has not experienced the kind of drastic, full-scale renovation that is increasingly common in Yunnan's rural hamlets. Nearly ten years ago, when we last visited, the village was in the middle of receiving a bit of a makeover. Pipes were being laid beneath its cobblestone lanes, new power lines were going up and an imposing parking lot was being built near the main entrance. Such changes may not seem like progress from the perspective of those who cherish the cultural heritage of China's rustic past, but they are seemingly inevitable. This is especially true since the gargantuan Longjiang Bridge brought the village within more convenient reach of established tourist center, Dali. Nonetheless, Heshun has plenty to offer for connoisseurs of pastoral charm, and one can be confident that the slow pace of life in will not disappear altogether. Tengchong Airport receives around ten planes daily from Kunming, and flight times are under an hour. There is currently no Kunming to Tengchong rail link, and even with marked infrastructure improvements, a bus ride from Kunming — 700 kilometers to the east — is still nearly a full day away. A car ride can take between eight and ten hours depending on traffic. If you are interested in visiting Heshun, Tengchong or anywhere in Yunnan, Kunming-based tour operator Wonders Of Yunnan Travel provides rental cars with drivers, hotel bookings, all sorts of travel related services and other valuable tourism information. Please get in touch directly for further details.

Really nice photos, makes me want to visit the place, although I object to the practice in China of charging entrance fees to visit whole towns, which turn them into museums.

Its true, Tengchong (Heshun) was located on an important route between Tibet and Burma before 1950's. Tibetan pilgrims going to Bhamo pagoda. Merchants doing caravans between Tibetan areas and Burma. Plenty of English observations (from Burma) of Tibetans doing caravans there, and all the way down to Moulmein. Those days you knew who were the Tibetans, they slept out in the fields, had mastiffs, did pilgrimages while doing business, were "dirty", dranks butter tea, ate tsampa, had turqoises and whatnot hanging around neck. Theres hardly a word on this phenomenon in modern research. Anyway we come to the question did the Tibetans maybe have manuals of travel routes in Yunnan and Burma and such? Or was it all kept secret as caravans secrets? Are Tibetans scripts only religious materials, or maybe there is some hidden dusty gem somewhere: an old Tibetan manual on the pilgrims route to Shwedagon. What a gem for someone to find.

From an ancient perspective, this was the road connecting India to Yunnan, interesting for a few reasons. For example, one modern theory from a respected academic is that the very name China derives not from the Qin Dynasty as often suggested, but from the description of the Yelang Kingdom in their own language as reached by Indian traders and travelers in antiquity. See en.wikipedia.org/wiki/Chinas for more information on that theory. Secondly, the Nanzhao Kingdom (Yunnan's very own regional empire) is known to have maintained contact with South and Southeast Asian powers along this route, including trade and the probable transmission of Buddhist religious philosophy. Finally, multiple East Asian Buddhist pilgrims to India are known to have traversed this route, important in the history of Mahayana Buddhism and the development and maintenance of Sanskrit literacy in ancient China.

@Alien: The important thing about Heshun, which the article failed to mention, is that it was the site of the first private museum in Yunnan... amusing food for thought given your comment of the town-to-museum transformation.

I visited many years ago, before the last decade of modern development, and it was indeed a very pleasant town preserving significant courtyard architecture.

Even from my incomplete survey then, there are certainly quite a few such towns around Tengchong, not only Heshun. At least one to the southeast.

@Peter99: Heshun is a village southwest of the city of Tengchong (formerly known as Tengyuan), and is quite distinct from it. I don't think there was a huge amount of casual travel southwest to Burma during most of history as the jungles were malarial, so I would be interested to hear what your source on Tibetan vistitations may be. AFAIK from visiting, even the Heshun natives would traditionally go make their money in Burma (through jade, gems, opium, etc.) then return to Heshun in old age - not come and go during their lives, presumably largely for this reason.

Yea, Heshun. See, I didnt want to nitpick on it, of course Tengyueh (Tengchong) was the commercial/carava centre and Heshuns history is (and was) distinct from it in many ways. Could have picked on the "Tea Horse Caravan Route" too, but I think thats been done several time by now.

The Salween area north of Tengchong was famous for the malaria, you are very right. Valley of the Black Death. Caravans even afraid of the rainbows there. Many Bai caravans didnt go south of Yongping and such due to that infamous valley.

About sources. The thing is when you read colonial observations - and from a non academic standpoint - you dont write down pages numbers and sources and such. First time I read about Tibetan caravans in Moulmein I was surprised. Later when read about Tibetans at Shwedagon same thing. Then another book about Tibetans going for pilgrimage to Bhamo. Et cetera. There were several observations from English people in colonial days on Tibetans in Burma. This is a matter of digging into these books. Tibetans in Burma came up quite a few times, and thats why I said I believe modern research has missed out something there. Lots of colonial times observations of Tibetans in Xishuangbanna too. Thats the "Tea Horse Road". Theres even a photo of Tibetans sweating in Xishuangbanna dressed in furs and with flintguns and mastiffs.

And there were Kham caravans robbing people all the way on the road to Leh, long West of Shigatse. Khampas were the one too, that put up an resistance in Mustang.

The khampas seem to have had a distinct knowledge of trade routes and a knowledge of far away geographical areas. I think we can be fairly sure it was khampa caravans going to Burma. Unless the English labeled all scruffy caravans as "Tibetans", from Hui to Naxi. Caravanery was in the blood of the khampas, just as the French have a hand in gastronomy, or say, Chinese are thinking in terms of business.

So the question remains, was (is) there maybe some manuals about outside world in some forgotten dusty Kham encyclopedic collection. Tibetans had a writing script, and even publishing houses (affiliated with monateries). Or was this publishing only concerning religious texts and a few leaflets about medicine. Maybe. And maybe the knowledge of the outside world was a trade secret among khampas, handed down by generations and caravan traders.