Yet another major evolutionary find unearthed in Yunnan 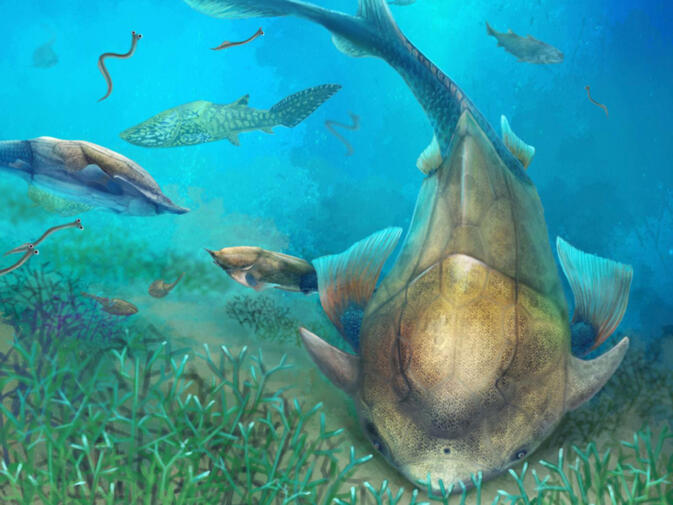 Paleontologists working near the city of Qujing (曲靖) recently uncovered what they believe to be a major piece of the evolutionary puzzle concerning the earliest development of jaws. A report first published in the journal Science outlines the analysis of Qilinyu rostrata, a fish living in the primordial seas more than 400 million years ago.

A team led by Dr Zhu Min of the Chinese Academy of Sciences Institute of Vertebrate Paleontology and Paleoanthropology made the discovery. They originally unearthed a single specimen in the rolling limestone hills near Xiaoxiang (潇湘), a hamlet about six kilometers southwest of Qujing.

That first fossil was missing its lower jaw, but further excavations this year revealed five more-intact specimens. What the research team found appeared to fill in a major gap in the understanding of where modern jaws originated. Qilinyu — a member of the now extinct placoderm class of armored fish — is the oldest species of its kind ever found to have a jaw consisting of three separate bones. According to an abstract of the report findings:

Zhu et al now describe a [...] Silurian placoderm that more securely bridges the jawless toothlike plates of placoderms to the development of the jawed condition that ultimately led to the three-boned jaw in ancestors of modern vertebrates. This finding [...] sheds light on the evolution of the complex maxilla [upper jawbone], a key component of diversification across many modern taxa, including humans.

What makes the finding so important to evolutionary scientists is that it, for the first time, confirms a direct link between ancient fish species and all modern animals with jaws. Before Zhu issued his findings, this relationship was generally agreed upon by the scientific community, but no hard evidence existed.

The bottom-feeding Qilinyu was 20 centimeters long, swimming and feeding in the waters of a tropical bay nearly half a billion years ago. Its discovery may be a portent of much more to come, as Dr Zhu and his team have collected 20 other unidentified marine fossils from the same site, which they have yet to classify. The discovery of Qilinyu represents the latest important fossil find in Yunnan, which has proven to be a veritable treasure trove of evolutionary information.