By Patrick Scally in Features on September 1, 2016 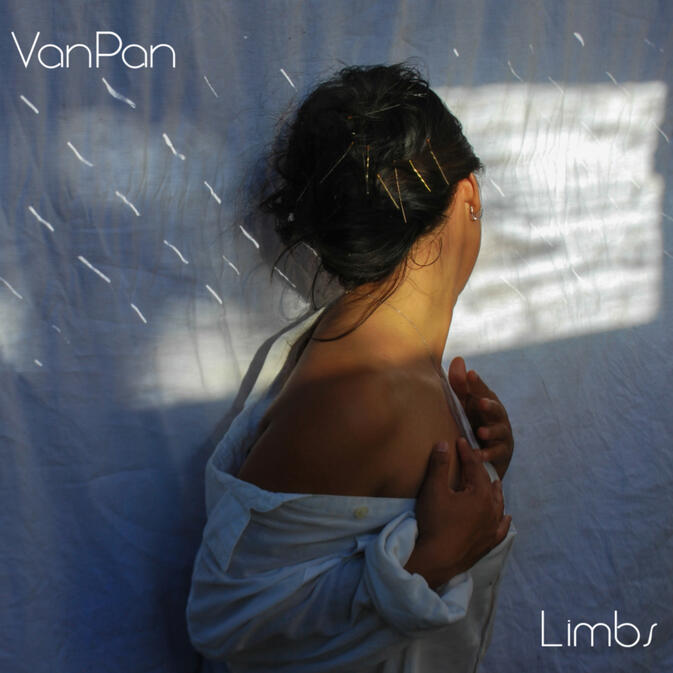 For the past three years, California-born Vanessa Pan has been making music in Kunming. Her journey to the Spring City involved a year of study in Paris, a desk job in the Bay Area, and finally the decision to move to southwest China. On Sunday, September 4, only two days before she moves back to the States, Pan will release her debut album Limbs during a party at DT Bar. The festivities will feature a performance by Pan, Middle Eastern barbecue goodies, drink specials, an open jam session and much more. Pan's new 17-song album and t-shirts will be available to buy as well.

We sat down with Pan and album producer Jan Hassmann recently to discuss Kunming's music scene, the life of a Kickstarter project, their collaborative efforts and the possibility of dozens more albums in the future.

GoKunming: So now, just as you're about to leave, can you tell us how you ended up making an album in Kunming?

Vanessa Pan: The first year here I was an English teacher. You know, working, studying Chinese, wandering down random alleys...exploring. It wasn't until the end of my first year that I discovered the Kunming music scene. I played at Mask's open mic night, kind of sheepishly starting to come out of my shell. After a bit, people began asking why I wasn't gigging more. But the real start was when Jan contacted me to do backup vocals for Nevada's album Rocket Chair. That was the first time I really dipped my toes into the scene here. So it's been two years now that I've been pretty active.

GK: Playing doesn't mean you are planning on putting together an album. Was it the more shows around town that nudged you towards thinking 'Hey, maybe I should record all of this stuff'?

Pan: Well, I've been songwriting since I was 14 and I have 195 songs now on this crazy Excel sheet. Anyway, it wasn't until after doing Nevada's album, singing backup vocals and enjoying it a lot, that I kinda pathetically approached Jan like, 'Oh...man...do you think, well...I have some songs and...I don't know, maybe you can help me...uh...record an album?' So Jan pretty innocently says 'ok', not knowing we would eventually end up with eight musicians — when at first it was going to just be me and an acoustic guitar. It got a little out of control. 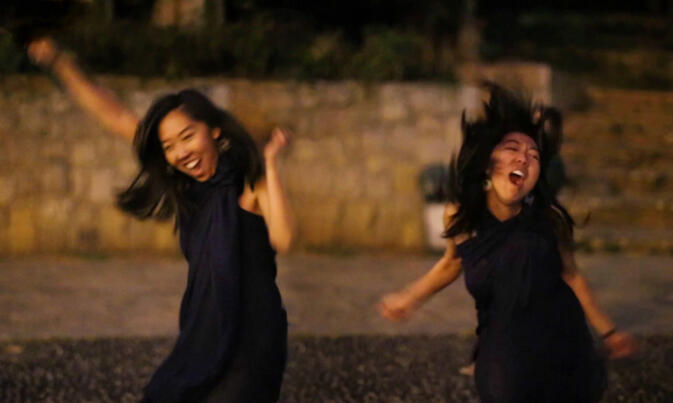 GK: What were some of the challenges of recording the album?

Pan: That second year was supposed to be my last in Kunming, but because so many people agreed to work on the album, the project grew bigger and I changed my plans. People started asking me how I was going to pay eight musicians. That was the first challenge. Kickstarter — the way we decided to fund the album — ended up being really great for us. I'm the kind of person who will enthusiasitcally evangelize someone else's stuff, or things I like, but has a hard time doing it for my own creations. Through Kickstarter, putting people at the front and back ends of the project, made sure it wasn't going to stop until it was done.

GK: Other than the added motivation how did Kickstarter work out for you?

Jan Hassmann: I loved that. It was really...I had never been involved with that sort of project. It was very inspiring to do it, make it look good and check every eight minutes to see if we got another sponsor [laughs]. It was a lot of fun, very exciting and super successful in the end, I think.

Pan: Yeah it was. We set a lowball goal of $3,000. We didn't understand how much it would cost — the time, the resources needed, the energy — but we ended up raising over $5,000, which was wonderful. It helped us fund the video and a demo that we recorded in 18 hours, as well as pay for the team's time and most of the production costs. Because I'm lazy, throwing myself into the fire was the only way to get the whole thing done. Instead of thinking, 'I don't know what I'm doing', we were just [pauses]...doing it and learning along the way. It became about accountability, as opposed to ego or self-esteem.

GK: You've been on stage performing a lot, so the nerves have probably subsided at this point. Is releasing the album a return to that feeling of exposure first-time performers get?

Pan: Oh yeah. It's an even greater fear than getting on stage. I'll be shy to get on stage, but once I'm up there, I love it. With the album release, the business side, the marketing and recording stuff, it has all been very new. It's been a montage of emotions, highs, lows and everything in between. 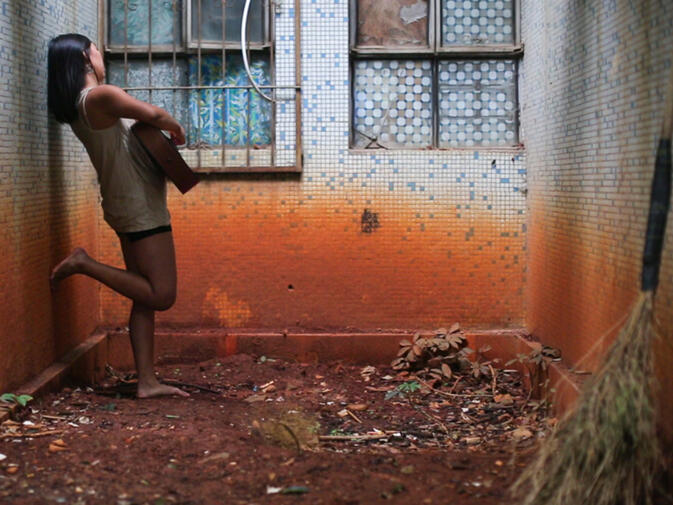 GK: What should people expect from your album Limbs?

Pan: So, the album is 17 songs, and what people should expect is a fuller sound than the average acoustic singer-songwriter. When people ask me to explain my music — which is the most terrifying question ever — I tell them it's like a crazy global lovechild. Imagine Rilo Kiley and Feist unleashed, with more graphic lyrics. Instrumentally it's backed by a great amount of talent. We perform in three languages — English, French and Chinese — and we do a lot of genre-crossing. I guess what people should expect is to feel like they're getting thrown around, through genres and across the world.

GK: You said you have a personal songbook of nearly 200 songs. How did you pick which ones made the album?

Pan: I gave 25 to Jan, and told him to pick ten. He picked ten and then I just kept adding more and more on top of that [laughs]. Somehow we ended up recording 25 in the end, put 17 on the album, have a five-track B-side, and just dropped some of the others.

GK: Why the title Limbs?

Pan: Originally I was hooked on the idea of calling it 'Subject to Change'. That's what I wanted. And Jan hated it!

Pan: I loved the pun. So much of what art and music are about is the process of change, trying to pin down something you can't. But Jan hated it. And it would be rude and unfair to say that this project isn't just as much Jan's as mine. He has put in just as much time, just as much effort. Equal parts too much from both of us! So we just sat on his balcony, drank coffee, ran through all the lyrics and asked, 'What name can we agree on?' In the song Bluebird's Nest, there is the lyric, 'As our limbs intertwined and meshed'. 'Limbs' is such a weird word. It can make you think of arms and legs, but also branches and 'on a limb'. So we liked the versatility and meanings and settled on that name.

Hassmann: I wanted the title to be 'Pangaea' but...

Pan: It makes people think of dinosaurs or something! When we were thinking of the name, Jan would lean over and kind of creepily whisper 'Paaaangaeeeeeea' [both laugh].

Hassmann: There were no dinosaurs on Pangaea! 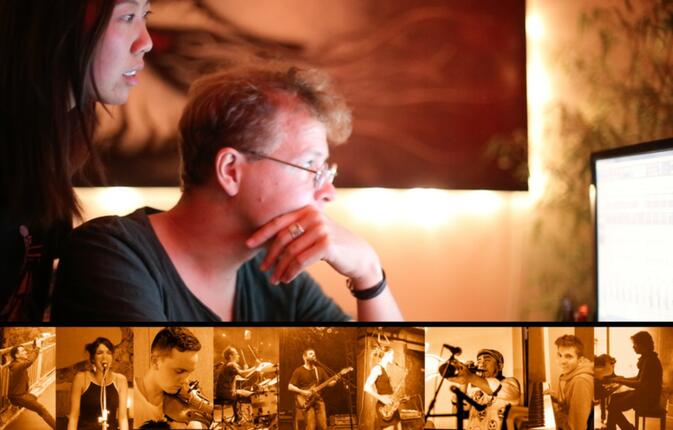 GK: So...how was working with Jan?

Pan: Fantastic. I have grown so much in the past year, and it was to do with much more than the music. It is a really interesting experiment to do with anyone. Take any person, whether you like them or not, spend 200 hours with them in a five-month period, and see what happens. It was amazing. Jan has seen parts of my character that most don't.

Talk about a way to get your ego...in, up, down... any way in between. Part of it is the excruciating amount of repetition. People think of art as this fun creative process, but...no. In recording it's like, do it again, do it again, do it again. While we were recording the song Kitchen Counter, I could feel myself getting progressively down, take after take, repeating the words I wrote when sad and contemplative. Jan asked me how I was doing and I said, 'I need a break!'. I made a beeline for the kitchen, stuffed my face with his homemade bread and butter, eventually felt better and was ready to continue. So how was working with Jan? The food was amazing! I just kept adding more and more songs so we could keep eating together.

GK: Jan, how was it working with Vanessa?

Hassmann: We spent so much time working so closely together. It's all about emotion and getting the right thing out of it, and this was my first real on-my-own producing job. In the beginning we had an artist and an acoustic guitar. Now we have full-blown band arrangements with strings, bass, guitars, drums and everything else. For a lot of it, we had to find a place between the two of us, to find what was best for the song. Sometimes it's very easy and sometimes you can't find what both people think works for the song.

Pan: We threw a lot of people from very different backgrounds into this. Everyone had different input and we asked them 'What can you create?' and then had to watch the baby grow. It was very different from when I was in my room writing the original songs.

Hassmann: Everyone has many ideas or a vision for each song. But there does have to be someone who finally says 'No, we're going to do it this way'. You can't make everybody happy. But it's good, and I'm very proud of the final product. We both are. Friction is good, and Vanessa and I worked very well together. We both kept learning.

GK: Vanessa, after all of this work, you are leaving almost immediately after the album is released. Are you having pretty mixed emotions?

Pan: Even right now I can feel it. The last day of working on the album I was thinking, 'But, but, this is what we do. Can't we just keep making this album forever? We still have a 190 songs...'