Rainy season arrives in Yunnan with a vengeance 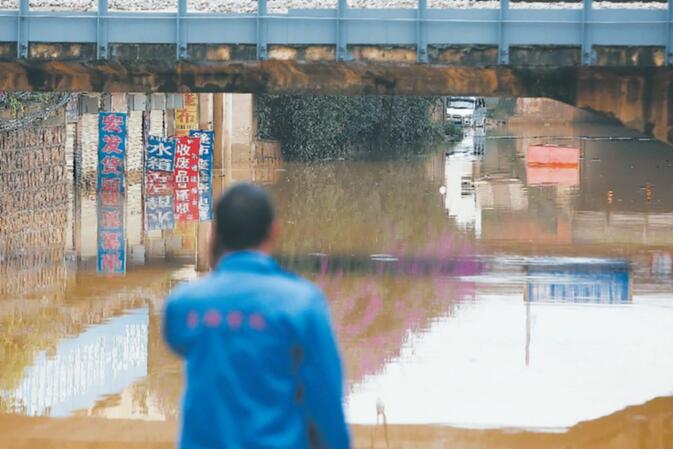 Nearly continuous rains are causing problems both in Kunming and across the province. While the Spring City has seen limited flooding over the past several days, in other more rugged areas of Yunnan, stormy weather has turned deadly. The most recent example involved a passenger bus in the province's mountainous northwest, which was bombarded with boulders during a landslide.

The vehicle was traveling between Lijiang and Shangri-la on Sunday, June 13, when several rocks were dislodged from the slopes above and landed on the bus. The largest stones weighed more than 80 kilograms, and punched directly through the roof of the bus before embedding in the floor. The small-scale avalanche killed one passenger — a tourist from Hangzhou — and injured four others from Jiangsu and Heilongjiang provinces.

The accident stalled traffic along the highway for several hours as emergency crews checked for other injuries and road workers cleared the thoroughfare. Accidents in the area, located roughly 40 kilometers south of Tiger Leaping Gorge, are common at this time of year. Mountain gradients often top out at above 80 degrees, making the prospect of rain-induced landslides a near certainty. However, boulders crushing cars are fairly uncommon.

In other parts of the province, rains are having equally disastrous consequences. Parts of Luoping in the east were drenched with 104 millimeters of rain in less than 24 hours on Sunday, while Dehong, in the far west, received nearly as much precipitation over the same time period. However, Zhaotong Prefecture is reportedly experiencing the worst flooding. The town of Zhenxiong (镇雄) has suffered enormous damage to roads, residential buildings and schools as several small rivers have overflowed and merged. In the area directly surrounding Zhenxiong, an estimated 200,000 people have been moved to higher ground until rains subside.

On a far less serious note, but one also involving rain and its effects on public transportation, a Kunming bus driver has been suspended for 30 days after deciding to drive on the sidewalk. Faced with an unmoving traffic jam caused by minor flooding on Caiyun Bei Lu, the driver jumped a curb and drove for 750 meters along the sidewalk, stopping to pick up unfazed pedestrians on the way.

Most regions in Yunnan receive between 60 and 80 percent of their average annual rainfall during the monsoon season, which typically lasts from June through August. As a rather ominous news headline succinctly summed up the recent weather situation, "This is just the beginning".

Last night at the Future of Dianchi forum the government said that one challenge here is that there are very steep slopes and that rain typically results in flash flooding. The current policy is to gradually change Kunming in to a 'sponge city' capable of absorbing rapid rainfall before gradual dissipation, beginning with a 15 square kilometer pilot location.

Did they outline what 'spongifying' the city would entail?

sounds like spin. would require spending. it will be like the keep dianchi green initiative, anything that looks like we are doing something not involving cost. one solution would be to direct all of the water down the metro tunnels, might as well use them for something.