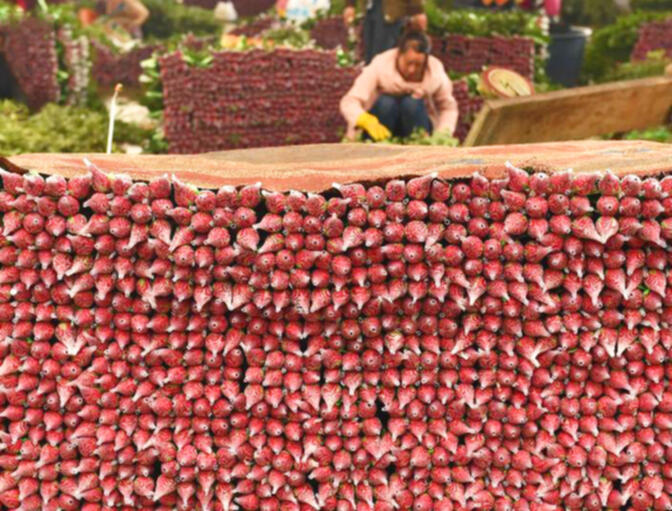 The booming market for flowers grown South of the Clouds continues to expand, and last year set industry records, according to a new government report. The Yunnan Department of Agriculture released data this week showing the industry sold a staggering 40 billion yuan (US$6.2 billion) worth of flowers in 2015.

Accompanying such gaudy sales numbers are a bevy of statistics surrounding the evolution of flower production in the province. Last year Yunnan growers cultivated eight billion individual flowers, weighing an estimated 620,000 tons. The largest share of the market over the same period was made up by cut flowers, which totaled sales of five billion yuan (US$770 million).

The vast majority of flowers grown in Yunnan are exported to other parts of China, as well as overseas. Nearly 90 percent of last year's provincial production was shipped to larger mainland cities and 46 countries across the globe. Industry growth has been spurred on by several factors, most notably increased demand, expanded growing capabilities, better-equipped shipping and logistics services and a diversified range of products.

Orchids especially have come into vogue among Chinese buyers and growers increased production in response. The Department of Agriculture report also claimed that Yunnan possesses the largest orchid-growing "capabilities" in the world — ostensibly a reference to an interlinked but independently operated grouping of hothouse facilities centered around Yuxi (玉溪) and Songming (嵩明). Luxury flowers are not the only burgeoning market according to Lu Jiliang (陆继亮), deputy secretary of the Yunnan Flower Industry Federation:

The Yunnan flower industry is no longer simply fresh cut flowers. There are a variety of new products, including perennial flowers and plants, ornamental seedlings, edible flowers, traditional medicinal applications, as well as developing markets centered around flower art, health care products and other industries.

Also mentioned by Lu, and perhaps equally important to the overall industry, is the fact that Yunnan flower companies are spending large amounts of money developing new techniques to cultivate more flower types. Currently, growers in the province raise more than 600 flower varieties, some of them extremely rare.

Overall, in Lu's eyes, the industry is extremely healthy despite intermittent market fluctuations. He expects the evolution of the flower business in Yunnan — which produces more than 70 percent of all flowers grown in China — to keep pace with demand. As an example, he points to domestic sales, which are growing at an annual 20 percent clip, and show no signs of slowing down.