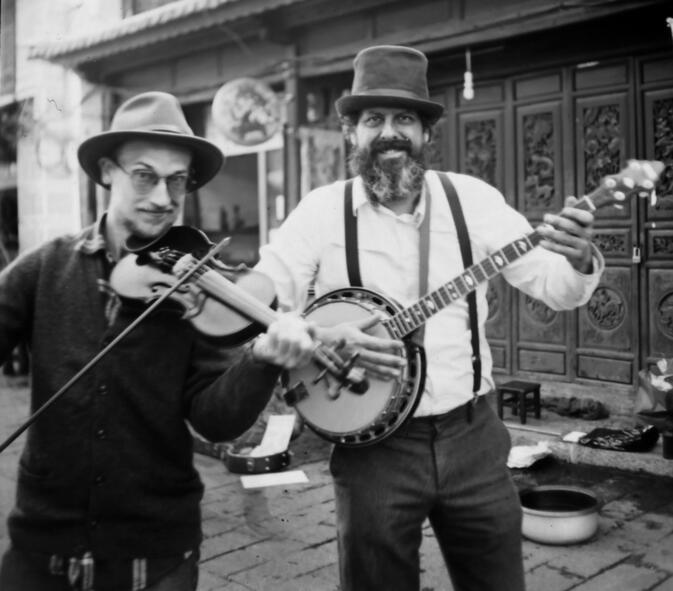 American Bluegrass music and its traditions are not particularly well-known in the Middle Kingdom. However, a Beijing-based band called the Hutong Yellow Weasels (胡同黄鼠狼) is looking to change all that. Their brand of old-time Appalachian music lends itself to a very specific type of dancing, and on January 30, they will visit Kunming, play at Camel Bar and see if the Spring City has what it takes to pull off a square dance or two.

The Hutong Yellow Weasels are the core duo of Chris Hawke, who handles vocal, banjo, guitar and bass duties, while Kirk Kenney sings and plays both the fiddle and guitar. We recently spoke with Hawke about bluegrass, square dancing, overalls and, oddly enough, Cypriot passports.

GoKunming: For those who aren't familiar, what is a square dance, or barn dance?

Chris Hawke: A barn dance is the most fun you can have standing up, and has been known to lead to the most fun you can have lying down as well. It's a low-pressure way to mix with a bunch of new people, requiring no musical aptitude or dancing skill. In a barn dance, a professional dance caller arranges people in formations of eight, and calls out instructions like 'swing your partner or 'hold hands in a circle and move to the left'. It's that easy. You don't need to remember anything — the caller gives the instructions as you go along. We run through it once without music before each tune, and then the fun starts.

A barn dance is what you do on Friday night, if you live in a place like Asheville, North Carolina. It's been that way for at least a hundred and fifty years, and still is today. It's for people of all ages.

GK: China has it's own version of this with slightly different sensibilities, the guangchang wu (广场舞). Are it and the American barn dance mutually exclusive beasts or do they share some similarities?

Hawke: I love the dancing grannies, but the two things have nothing to do with each other. Nothing. The square in the American version refers to a formation of eight people — not a public square. 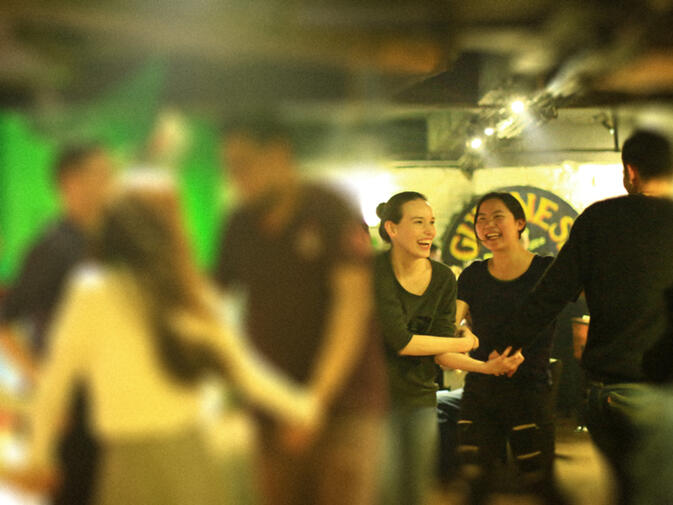 Hawke: Yellow weasels are mythical animals in Chinese mythology, like foxes. We used to see them running through the old alleyways of Beijing when walking home from playing music. They reminded us of the traditional Chinese saying, 'The Yellow Weasels call on their neighbors to dance, with good intentions'.

GK: How did you guys first get together as a band?

Hawke: Some random Chinese guy called me up and said he needed three Western musicians — black, white, but not yellow — to play a gig. I asked what kind of music and he said it didn't matter. We ended up playing in a ballroom for a law firm trying to sell Cypriot passports to a room full of wealthy Chinese concerned their wealth would be seized by anti-corruption officials.

GK: I'm guessing this is a facet of American culture most Chinese are unfamiliar with. What is the general reaction of your Chinese audiences?

Hawke: They find it quite cathartic, because its very easy, fun, and requires no musical or dancing skill. The Han Chinese, you may have noted, are not natural dancers. But take them to an ethnic minority tourist site, and they are dancing in a big circle with the costumed local people having the time of their lives. It's kind of the same thing with us. We even wear overalls to emphasize our exotic nature. 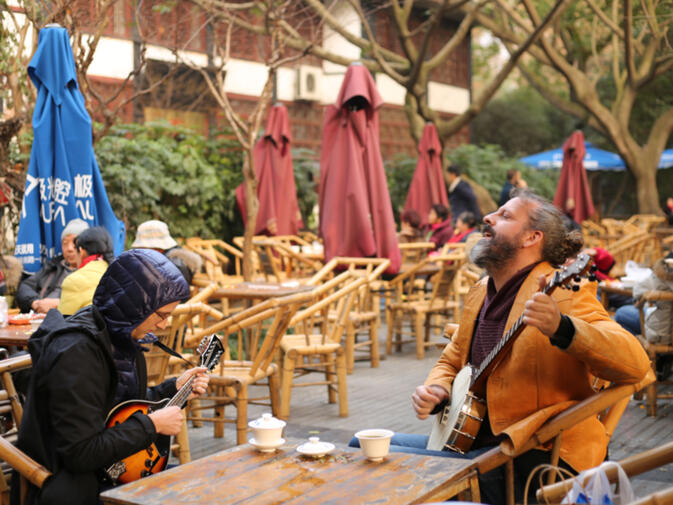 GK: Do you ever incorporate traditional Chinese instruments into your performances?

Hawke: Not yet. But Kirk plays about eight of them.

GK: You guys performed in Dali in 2014. What was the event, and how did you like it?

Hawke: We loved it. September Bar is one of our favorite places to play in China. The audience is very attentive, the management is serious about music, and everyone has a lot of fun. The bar is often so full we take the square dance out onto the street, which everyone loves.

GK: From your time touring in China, have there been any memorable or bizarre happenings at your shows? Has a square dance ever gone horribly wrong?

Hawke: The first gig of our first cross-China tour was in a stainless steel, mesh and leather, whiskey and fruit plate bar, with a smoke machine and a Filipino band that played songs like My Humps. When our guest fiddler Michael Ismerio sang his a cappella version of West Virginia Coal Mining Disaster, all five patrons in the place cleared out. He sang the same song on the last gig of the tour at Mako Live House in Beijing to a full house and a roar of applause.

During our current tour, the investor in a bar who saw us perform in Dali hired us to play a month at his bar in Chengdu to bring some life to the place. But the manager refused to let us do any square dancing at all, making it difficult for us to fulfill our mission. A square dance band that is forbidden from square dancing? We learned how to play Country Roads and Hotel California. 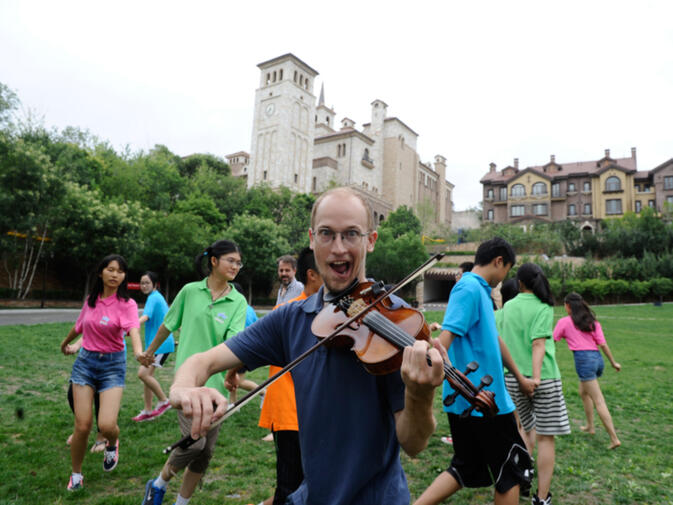 GK: If you could sit in and play with any artist or band — living or dead — who would it be and why?

Hawke: Fiddler Tommy Jarrell and banjo player Fred Cockerham, because I've spent two years trying to emulate them and will probably spend the rest of my life at it.

GK: The Hutong Yellow Weasels are most likely the first barn dance band to perform in Kunming. What should the audience expect?

Hawke: We'll be playing three sets of traditional music on fiddle, banjo, guitar and mandolin, with harmonies. If you've seen the film O Brother Where Art Thou, you will recognize some of the songs we play. We may also lead an absolutely filthy dirty sea shanty about sailors at shore. To counterbalance that, we will do some gospel tunes, as well as some bluegrass and traditional fiddle tunes.

We will lead three dances. During the dances, people should expect to have a blast meeting new people and moving to music that is so good it has lasted unchanged for over a hundred years. Each dance will be run through without music by the caller in English and Chinese, and then done with music, with instructions called out every step of the way. For the encore we will play Country Roads and Hotel California, for the Chinese fans.