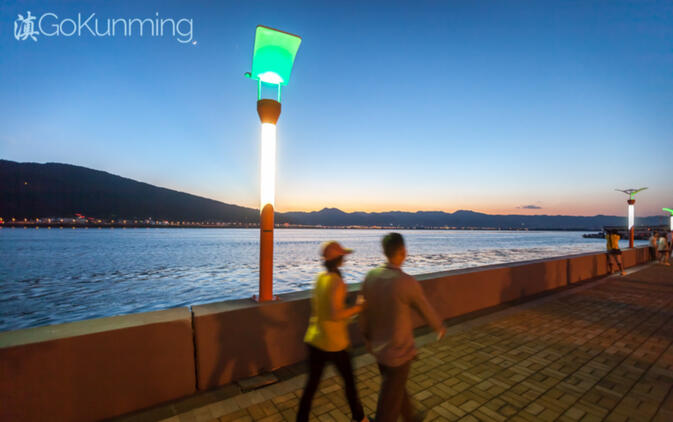 Locals stroll along the Dianchi Lake promenade near Haigeng Park

Provincial government findings published December 26 reveal a multi-pronged clean-up effort targeting the quality of water in Dianchi Lake (滇池) is slowly yielding tangible results. Outward signs of progress include the return of dozens of bird species, improved health of surrounding natural areas and, according to a public opinion poll, a significantly reduced odor emanating from Yunnan's largest body of water.

Officials credit the advances to three ongoing projects. These include the construction of several new sewage and wastewater treatment facilities, a water diversion scheme and the preservation and expansion of existing shoreline wetlands and forests. The first undertaking is perhaps the most logical, necessary and effective means yet considered for a lake that for ten years has been slimed by an enormous algal bloom.

Somewhat shockingly, Kunming had almost no sewage treatment plants until relatively recently. Human, industrial and agricultural waste all flowed freely into Dianchi, causing the water turn eutrophic and algae to grow uninhibited. Beginning in 2013, a series of modern water treatment facilities were built along rivers and streams feeding the lake. There are now 12 such operations, filtering an estimated 75 percent of Kunming's sewage on a daily basis. One hundred percent filtration is expected by 2020.

In addition to curtailing sewage runoff, a 'buffer zone' supported by 17 rainwater storage depots has been established along the lakeshore, collecting and treating wastewater. Of particular concern is drainage emanating from nearby farmland. Since 2014, the impound stations have reportedly reduced by 78 percent the amount of agricultural fertilizers associated with exacerbated lake eutrophication from entering Dianchi.

River diversion is another part of the strategy to 'rehabilitate' the lake. Water from a reservoir near Qujing has been funneled into the Niulan River (牛栏江) at a rate of 566 million cubic meters per year. It eventually empties into Dianchi. Officials believe by "shortening the water replacement cycle" of the lake, algae will eventually be stifled, as a stagnant body of water is much more susceptible to eutrophication. Water from the Niulan River will soon be augmented by the Dianzhong Water Diversion Project (滇中引水工程), which will channel massive amounts of water from the Jinsha River (金沙江) 661 kilometers southeast into Dianchi.

The final piece of the current Dianchi clean-up strategy involves bordering wetlands and a reforestation program. Over the past several years, lake management officials have overseen the planting of 16,400 acres of trees around Dianchi and fostered the growth of 3,600 hectares of new wetlands. Both actions look to capitalize on each ecosystem's natural ability to purify water, ensure shoreline stability and act as carbon sinks.

Reducing pollution and increasing water flow may be ongoing solutions for Dianchi, but neither offers outwardly visible signs of progress in the short term. One bit of demonstrable improvement is the return of once-common wildlife to the lake basin. This year, 138 bird species have been recorded roosting or migrating through the region, an increase of 31 percent over 2012. Fish stocks in wetland areas are also reportedly making a comeback, perhaps signaling a new era of optimism for a lake that has seen more than its share of indignities.

It's a long road, but they are trying.

Dunno about other readers, but I still can't get over the thought process and ethnical bankruptcy of "spend billions redirecting the headwaters of one of the most significant rivers in Asia [because capital of some province screwed up their lake]". This will permanently seriously deride the environment between the source point and, I suppose, Sichuan, where it seems the next major tributaries lie.