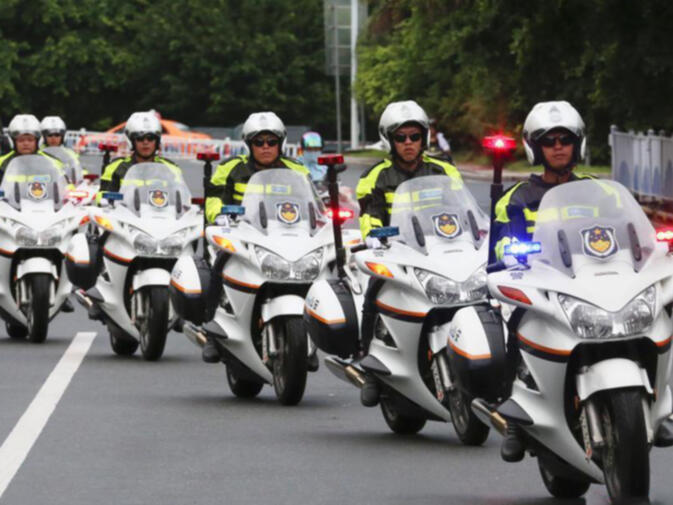 The tourism police brigade in Sanya, China's first municipal law enforcement department of its kind, now duplicated on a provincial level in Yunnan

Over the past decade, the domestic tourism industry has grown to become one of China's most potent economic drivers. As money poured into sightseeing destinations, an accompanying growth in fraudulent and coercive schemes emerged. Yunnan, where many of the most blatant cases have taken place, was recently chosen to lead a pilot program establishing the country's first provincial tourism police force.

The YTPC is mainly concerned with the rather broad task of "creating a better atmosphere" for those traveling in Yunnan, according to Xinhua. No details have yet been released regarding how many officers will be employed or what sort of budget has been allocated.

The province received nearly 12 million visitors — who spent a combined 7.2 billion yuan (US$1.13 billion ) — over the week-long National Day holiday. Many of them returned home grumpy amid accusations of price-gouging. Given the sheer number of complaints emanating from the province during peak travel times, as well as the wide set of goals announced, YTPC operational costs may indeed be high. Those objectives include:

...promoting quality and efficiency while maintaining order in the Yunnan market, addressing the major concerns [currently confronting] tourism development in the province, exposing problems, and generally building a bigger and stronger tourism industry.

Creation of the YTPC came about following a series of nationally broadcast news stories detailing tour agencies selling flight and travel packages to Yunnan at incredibly discounted rates. What consumers were not aware of was that once in the province, they would be forced or coerced to visit unending numbers of shops and retail outlets not mentioned in their purchased itineraries.

In extreme cases, such excursions have been captured on film and posted online by irate customers. Perhaps the most notorious of these involved a busload of tourists heading to Xishuangbanna who were berated by their guide, a woman surnamed Chen. She threatened "retributions" against those who had refused to buy jade and trinkets in Lijiang, saying, "If each of you cannot spend 3,000 to 4,000 yuan [in Xishuangbanna], we will cancel the rest of the trip. Your flight tickets home will also not be covered". Chen was later suspended and fined.

It is unclear — but would make logical sense — if the YTPC is also put in charge of monitoring traveller behavior. Booking agencies and tour companies are not the only ones accused of inappropriate conduct in Yunnan. Just in the past few years a Kunming Airlines passenger jokingly told stewardesses he had a bomb, 30 delayed travelers stormed a runway and, most infamously, a Yunnan official demolished a check-in kiosk after he and his family arrived late a second time for their flight. It appears the YTPC will be busy.

They have nicer bikes than the traffic police!

It would indeed be nice if there was some control over unsustainable conduct by large tourism corporations and overall bad behavior in the industry, but these guys will mostly be there to enforce/protect the government stakes in these corporations. So, if there are changes for the better, it would have more to do with a mentality shift of the general public instead of these fancy tourism robocops.

Can I ask them whether I really have to pay for putting my bike on the bus? How do I call them?