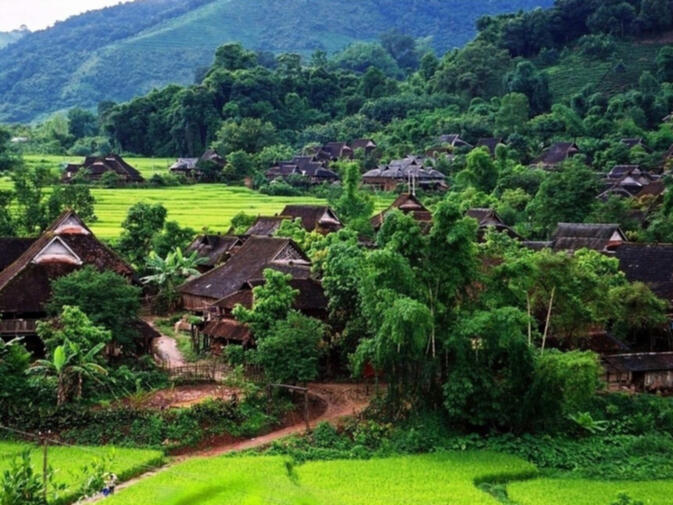 Investment and development money continues to pour into southern Yunnan's Xishuangbanna. Weeks after the largest resort in the province opened near the city of Jinghong, prefectural officials unveiled plans for a new economic zone with an eye-popping price tag.

The Mengla Economic Zone, according to plans approved this summer by the Yunnan Development and Reform Commission, will span 4,500 square kilometers, centered around Mengla County (勐腊县). Initial estimates place the cost of the multi-purpose undertaking at 200 billion yuan (US$31.4 billion). The zone spans 240 as-yet unclear projects reportedly focusing on the sectors of agriculture, education, logistics, processing, tourism and transportation.

The latter of the these is perhaps most important to national planners. Connecting cities in Yunnan to Southeast Asia by rail has long been a goal of the Bridehead Strategy, which looks to integrate the province's economy more closely to those of its international neighbors. Mengla County borders Laos and is one key component in plans to build a web of railway lines by 2020 which will further connect Southeast Asia with Kunming.

Progress, however, has been slow on multiple fronts. The Kunming-Singapore Railway — the main trunk line of the planned network — was once expected to open in 2015. However, due to ongoing financial disagreements between China, Laos and Thailand, completion projections have been pushed back at least five years.

In that time, a branch railway along the recently opened Kunming-Hekou line will be extended 500 kilometers south to the border town of Mohan (磨憨) in Mengla County. When finished, the railway will pass from Yuxi through Pu'er, Jinghong and Mohan before linking up with a 44.5 billion yuan (US$7 billion) Chinese-built high-speed line running to Laos' capital, Vientiane.

The newly announced Mengla Economic Zone appears to be a very expensive kick-starter of sorts. Its launch is not only aimed at furthering China's Bridgehead Strategy, but also seems designed to convince Laos — which is wagering half its annual GDP on the railway project — that Chinese intentions are serious and longstanding.

Regardless of the effects on Laos, the economic zone is another enormous financial shot in the arm for largely rural Xishuangbanna. Less than one month ago, real estate conglomerate Wanda opened a 15 billion yuan (US$2.36 billion) resort and development area of its own in the prefecture. The goal for such a sizable investment, in the words of company chairman Wang Jianlin (王健林), is to "...revolutionize Yunnan's tourism industry". One way or another, it looks as if sleepy Xishuangbanna is in for drastic changes in the coming years.

Guess its time to visit these places before they completely gentrified by the Han majority.

@tigertiger: I think 'genericized' would be a better choice of word than 'gentrified'.

In the opinion of one who lived there for a few years circa 2004-2007, Xishuangbanna is already mostly lost to history... the government has completely failed to protect its environment and culture, allowing financial interests from outside of the province to trample on long term interests of the environment, country and local populations.

The train sure does sound like a good idea - In that time, a branch railway along the recently opened Kunming-Hekou line will be extended 500 kilometers south to the border town of Mohan (磨憨) in Mengla County. When finished, the railway will pass from Yuxi through Pu'er, Jinghong and Mohan

Hmmm...I'm not sure I would call the rail line to Mohan a "branch of the Kunming-Hekou" line. While it's true they share the same track from Kunming to Yuxi, that's it. For the majority of their respective lengths they're two completely separate rail lines.