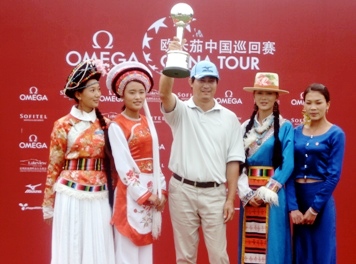 The Omega China Tour wrapped up today at Kunming's Lakeview Golf Club, with Zheng Wengen taking the 150,000-yuan purse. It was the first victory in five years for the 41-year-old, one of the first Chinese golfers to turn professional in 1994. For Zheng, who describes golf as "boring" and doesn't enjoy practicing, it was a crucial career-validating win.

Going into the championship round, Zheng held a four-stroke lead. He widened the gap Sunday, shooting a five-under-par 67. His play was much more consistent than it was in the first round Thursday, when he shot an incredible 11 birdies but also double- and triple-bogeyed, for a score of 66. In Sunday's fourth round he notched five birdies, and managed to steer clear of the course's many bunkers and stay bogey-free. Overall, he shot a 15-under-par 273 in four rounds of play.

Zheng had a firm lead approaching the 15th tee Sunday, but the race for second place remained open until the very end. Huang Mingjie was the runner-up, six strokes behind Zheng, and there was a four-way tie for third, with all four just one stroke behind Huang.

The competition was well-attended despite the weekend's rain, with 50 to 80 fans in Zheng's gallery at any given time. It also demonstrated that Lakeview is capable of putting on a first-class golf competition, even if some spectators still haven't gotten the message about not answering their mobile phones on the course.

"It was really great," said Kunming resident Ze Huchang, who stopped runner-up Huang for an autograph and photo op. "It was my first time to go to a golf tournament."