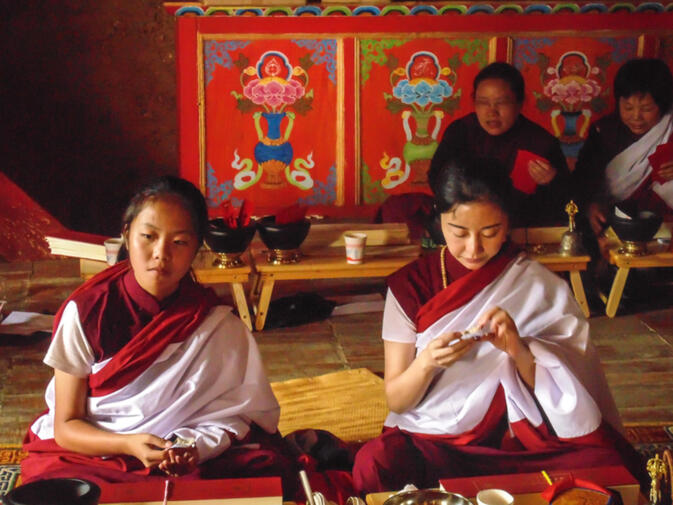 It is not uncommon for Westerners to renounce their old traditional beliefs only to find salvation in Eastern religions. Echoing this, more and more young Chinese people are becoming convinced that there must be more to life than just work, materialism and consumerism. It seems religion is on the rise in China. Guido van Oss, editor of quarterly magazine China Nu, recently visited a Tibetan Buddhist monastery in northwest Yunnan to observe this phenomenon in action. 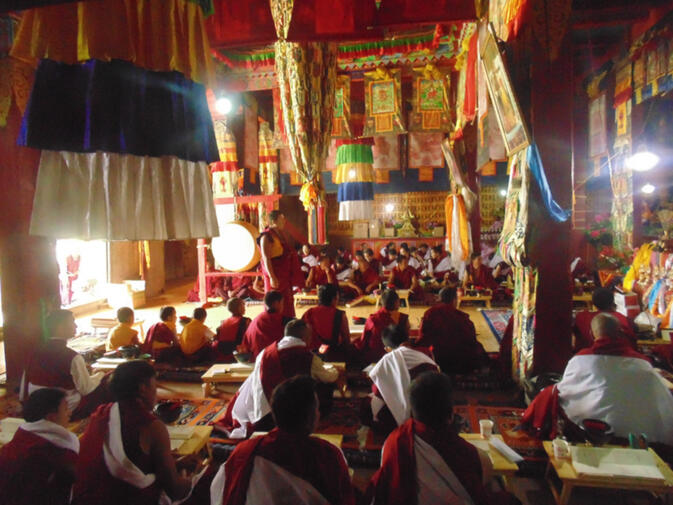 Some old monks aside, it became apparent many of the younger "monks" in Puhua Monastery (普化寺) were, under their Buddhist robes, suspiciously hip and fashionable. During a morning ceremony that took place outside in the square, some of them donned fashionable sunglasses and, if time permitted, also consulted their fancy smart phones and snapped prerequisite selfies.

I attend the ceremony in a remote monastery in northwestern Yunnan near the border with Tibet. After the ceremony, during a communal vegetarian lunch held outside in the fresh air, it came time to meet some of the young 'monks' and ask a few questions. It turned out many of them were there on a nine-day retreat, using much if not all of their vacation time. Quite a few were from different places in Yunnan, but others hailed from various Chinese metropolises, such as relatively nearby Chongqing and Chengdu.

The program of retreat and meditation seemed fairly light. These monks-in-the-making had a fairly short day, rising at 7am and then returning to bed at a mandatory time of 10pm. In the afternoon — following morning ceremonies, prayer and meditation services — they had from 12pm to 2pm for lunch as well as time to take an ample afternoon nap. The temporary monks' eyes therefore looked fully rested and relaxed, a stark contrast to the hurried, and often stressed-looking Chinese that one often encounters in big cities. 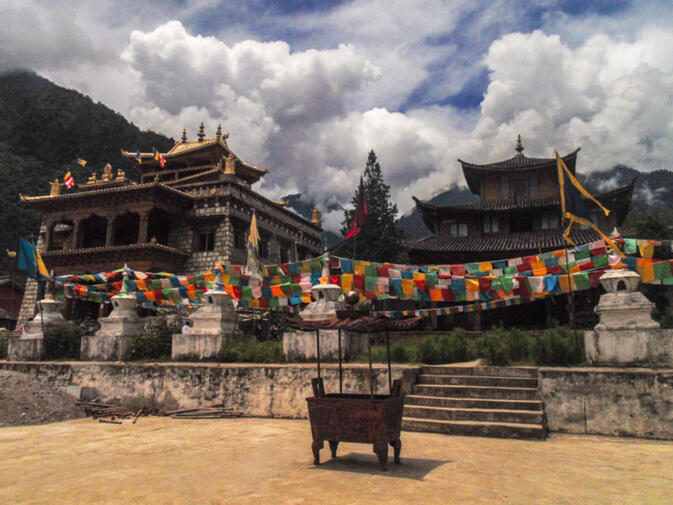 Puhua Monastery is a peaceful and spacious compound — with a brand new temple under construction — and is located in an abandoned village called Dongfeng (东风) about seven kilometers from a place seasoned China hands might recognize, Bingzhongluo (丙中洛). The whole complex is located in stunningly beautiful mountain scenery and the weather, at least during my visit, was sunny and temperate.

It is an ideal place for a city dweller to retreat, affording rest, fresh air, and all the time and space in the world for meditation and prayer. This is the northernmost part of the Nujiang River valley, largely bordered by Myanmar. But here in Yunnan's far northwest, Tibet is also nearby. Therefore, Tibetans themselves, their language and religious traditions, are all quite widespread. 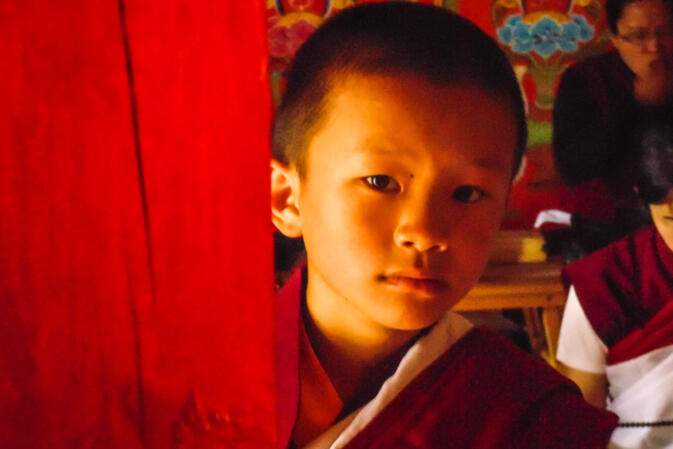 I talked to three women participating in the retreat and ask them whether men and women are treated equally within Tibetan Buddhism. The translation of the questions and answers, incidentally, ran largely through digital dictionaries on their mobile phones. "I can't necessarily say there is complete equality," one woman answers. The three discuss it among themselves for a while and eventually answer that Tibetan Buddhism pays as much attention as possible to treating all living beings on earth as equals.

In the early afternoon, I discussed the significance of the earlier ceremony with the same three women. They explained it was held to promote respect and trust between the people in attendance. However, another novitiate, also on a nine-day retreat, told me the ceremony was held to pray for good weather. Well, I thought, the weather is indeed excellent!

Following these rites, I asked the women how long they have been Buddhist and why. Each had only taken up the faith a few years earlier, and agreed they chose Buddhism because it is, in their eyes, the most powerful faith.

Their stay in this remote monastery, hidden amongst green and rugged mountains on the border with Tibet, especially for these urban youth, provided at least a momentary escape from their materialistic and stressful everyday lives. For them, the monastery provided a quick but necessary initiation into the practices and ceremonies espoused by their newfound faith.

September 17, 2021 "I have been specializing in teaching The TOEFL Exam for over 10 years, and I can help you Achieve Excellence On The TOEFL Exam. Only for serious st …"
Living in Kunming lemon lover