From Yunnan, China reaches out to flood-ravaged Myanmar 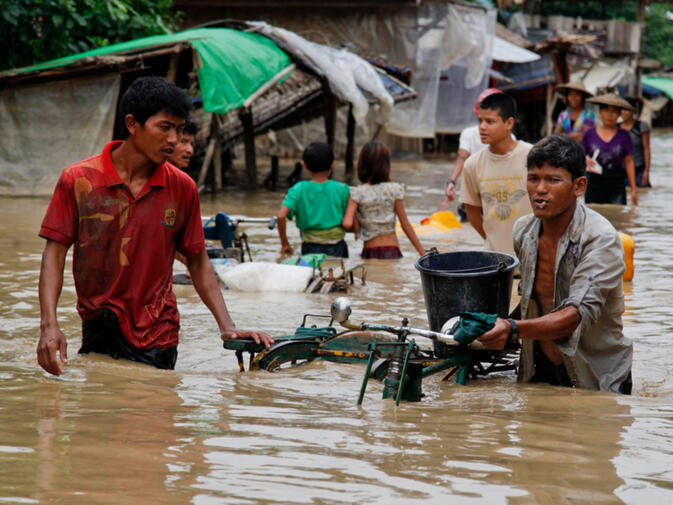 Battered by monsoon rains and devastated by floods, Myanmar is looking to the international community for aid. China was one of the first countries to respond, with Yunnan province initially providing modest supplies before becoming the gateway for much larger relief packages, including cash.

Myanmar's western and central regions have been afflicted by torrential rains since June, a situation further exacerbated by Cyclone Komen, which lashed the country with strong storms beginning July 30. Destruction of homes and farmland, especially in the country's rice belt, is widespread and has sparked fears of future food shortages.

As of this writing, deaths from the deluge have topped 100 people, and those displaced by floodwaters are believed to total more than one million. An estimated 1.2 million hectares of farmland also sits underwater. The Burmese government has characterized the flooding as the worst in more than 40 years. Damage reports, as they have been during past disasters, were slow to emerge. However, once details did begin to emerge, China dispatched its Myanmar ambassador, Hong Liang (洪亮), to Yunnan on August 8.

Hong arrived at the border town of Ruili (瑞丽), to oversee the first shipment of supplies to China's beleaguered neighbor, telling reporters, "Whenever Myanmar is hit by natural disaster, China will never stop assisting the country." He then oversaw the departure of 14 trucks loaded with tents, milk powder, rice and instant noodles headed for Mandalay.

Since the initial shipment of supplies, Hong has visited both Sagaing Region and Rakhine State, two places thought to be worst affected by flooding. Over the course of his travels, he has also dispatched a Yunnan-based helicopter search and rescue team, shared real-time weather satellite information with the Burmese government, and convinced Chinese energy and technology conglomerates operating in Myanmar to donate money and help coordinate relief efforts.

Chinese prefectural governments that share borders with Myanmar also pledged money toward disaster alleviation. Dehong — home to Ruili, and historically one of the most impoverished regions of Yunnan — lead the way by donating one million yuan (US$158,000). Coordinated relief efforts, according to Hong, are a way to "enhance [a] traditional friendship", and indeed, the two countries could certainly benefit from an improved relationship.

China was once Myanmar's strongest ally, but a series of bungled diplomatic and business ventures over the past several years have strained such ties. These include cancelled Chinese-funded hydropower and railway projects worth tens of billions as well as condemnations from both sides surrounding the fallout of a civil war in Myanmar's Shan State. Ambassador Hong's actions regarding the recent floods, while certainly stemming from a humanitarian impulse, may also be an attempt by the Chinese to relieve tensions with its estranged western neighbor.