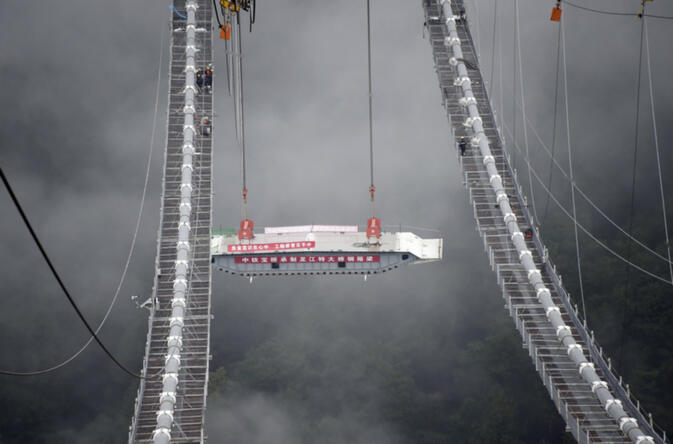 An enormous bridge being built in the western reaches of the Yunnan is perhaps lost among all of the other enormous infrastructure projects under construction across the province. Workers on the Longjiang Bridge (龙江特大桥) in Baoshan Prefecture secured the first giant section of roadway last week, marking a major milestone in what will become a 2,470-meter suspension bridge.

Billed in the Chinese press as the longest and highest of its kind in Asia, the bridge is expected to open to traffic in June 2016. When finished, it will further link the cities of Baoshan and Tengchong. The roadway is a spur of the Baoteng Expressway (保腾高速公路), which skirts around the southern reaches of the nationally protected Gaoligong Mountains Nature Reserve.

Construction crews hoisted the first section of roadway from an assembly plant located below the eastern tower, which itself rises to a height of 167 meters. The largest and heaviest pieces, which form the center section of the span, are placed in position first, meaning work progresses from the middle out, according to a site foreman.

Plans call for one or two of the 33.5-meter wide 'decks' to be affixed to support cables each day, dependent on weather conditions. At its highest, the roadway will hang a perilous 280 meters above the valley it spans, located outside the small town of Wuhe (五合乡). The bridge's 'center span' stretches 1,196 meters from tower to tower, while the 'side spans' — which connect directly to bordering hillsides — make up the remaining 1,274 meters. The unsupported middle portion of the Longjiang Bridge is only 84 meters shorter than the center span of San Francisco's famed Golden Gate Bridge.

By the time it is completed, the Longjiang Bridge — named for the Irrawaddy tributary it soars above — will carry a 1.47 billion yuan (US$237 million) price tag. It will shave 30 minutes off the southern route between the prefecture's two largest cities. Designers hope the road will bring economic benefits to the area which it passes, which is largely rural and undeveloped. One example of this, cited by Chinese news reports, is that the asphalt composing the actual roadway is made by a local company out of Tengchong volcanic rock.

The bridge project is also part of a larger effort to connect Yunnan's impoverished west to the province's more prosperous central region and, eventually, to neighboring Southeast Asian countries. Such undertakings include a railway linking the border town of Ruili to Dali by 2017, and the building of hundreds of small bridges in once-remote mountain communities in the northwest part of the province. 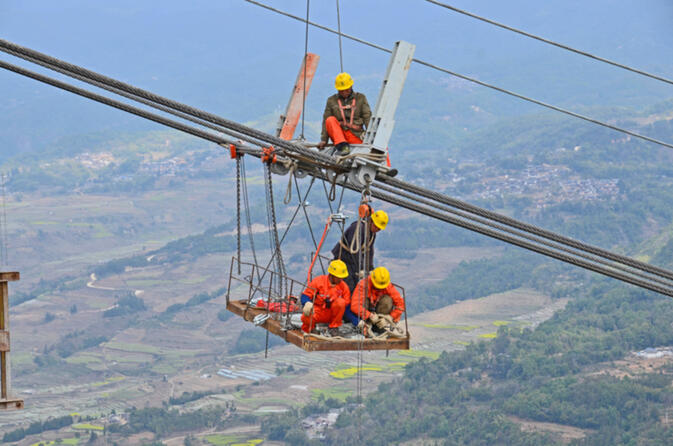 Hey! Forget the concreet, let's make the roadway from glass!

The Longjiang Bridge (龙江特大桥) has being open to traffic on May 1st, 2016, congratulations！I hope
to go through it someday.