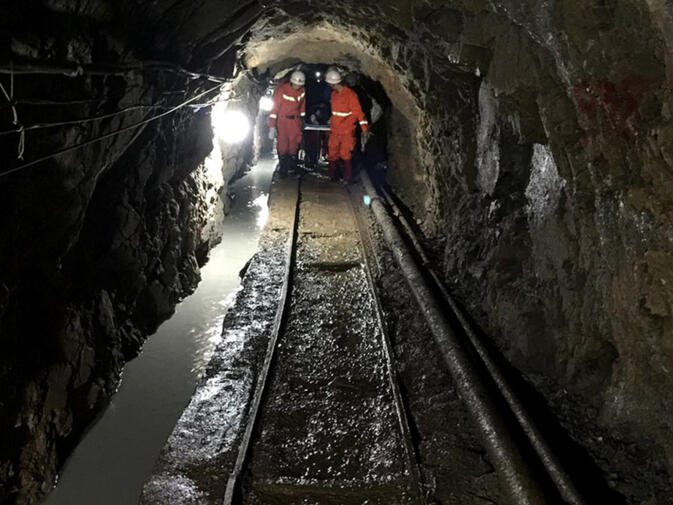 Eleven tin miners were successfully rescued from a Yunnan colliery after being trapped underground for nearly two days. The Guangping Tin Mine (光坪锡矿) near China's border with Myanmar — an area known for its conical mountains and active volcanoes — caved in on July 25, after a mine shaft filled with water-logged sand.

In the days prior, torrential downpours caused mud and sand to seep into the mine, which is located roughly 40 kilometers southwest of the city of Tengchong. Early on the afternoon of July 25, the ceiling of a narrow shaft collapsed, stranding the eleven men more than 400 meters underground.

A rescue team, composed of 1,824 people including army and police personnel, worked two 20-hour shifts over the weekend, finally reaching the miners on Monday. Because of the shaft's confined size, rescue workers were unable to use large machinery to clear debris. Instead, they relied on shear numbers, and extracted mud and sand by hand, often shoveling with wicker baskets. After 41 hours, the team was able to clear a 91-meter shaft and reach the trapped miners.

Although famished after the ordeal, none of those trapped were found to have any serious injuries. It is unclear whether the survivors had food or water while trapped. However, more importantly, the mine's ventilation system continued to operate at least partially during the entire rescue process.

Rescue experts were flown in from Dali and Baoshan to expedite the rescue process and Yunnan Provincial Party Secretary Li Jiheng (李纪恒) and provincial governor Chen Hao (陈豪) also made hasty visits to the site to offer their support. The province's two highest ranking officials called each of the trapped miner's families, offering updates whenever news arose. This form of governmental outreach, while not typical, is in line with Beijing's ongoing pledge to improve safety measures in the coal and ore industries.

Over the past decade, the Chinese government has instituted several measures aimed at limiting mine-related accidents such as the one this week — a policy that has been largely positive. This is due in part to the country's decreasing production of coal — so far this year down 5.8 percent compared to the first six months of 2014.

More stringent regulations, especially in the coal sector, have led many smaller companies, historically some of the least regulated, to shut down. The same is true of mines extracting tin and other non-precious metals. As a result, compared to the 6,000 workers killed annually just 12 years ago, 2014 saw a six-fold decrease in the number of mining-related deaths.

Nevertheless, despite government efforts to limit overall coal dependency, Yunnan continues to forge ahead with mining projects, digging up 100 million metric tons of coal in 2013 alone. The accident at the Guangping Tin Mine is under investigation, but press reports have yet to disclose what company operates the mine or if it is instead an unregistered enterprise. The latter would not prove particularly surprising, as just the past few years of Yunnan's mining history are littered with horrible accidents, devastating stories of pollution, resource exhaustion and violence.