I've always felt fascinated by the region at the eastern edge of the Himalaya where three great rivers flow parallel and very close to each other for a considerable distance. This region is in northwest Yunnan and I wanted to contribute in a modest way to the ongoing exploration of the mountain ranges there.

While I was looking for a suitable objective, rock climber Mike Dobie suggested I check out the smaller peaks that are north and east of the Yulong and Haba massifs. In his email he wrote, "There is a standalone 4,500 meter peak that would actually be quite an adventure to get to". Then, after sharing Google Earth co-ordinates he continued, "As far as I know it hasn't been climbed." Thus began my Yunnan adventure. I had two weeks time and US$600 at my disposal to meet my mountain and then return home.

By plugging in the coordinates (27°34'34.92" N and 100°18'37.75" E) given to me by Dobie into Google Maps, I noticed a small mountain range — not just a 'standalone' summit — stretching more or less north to south. The suggested peak stood at the very north of this mountain range. I also noted that the Jidege Range (吉得各山), as it is called, is actually part of the watershed ridge located in the middle of the loop created by the second bend of the Jinsha River. 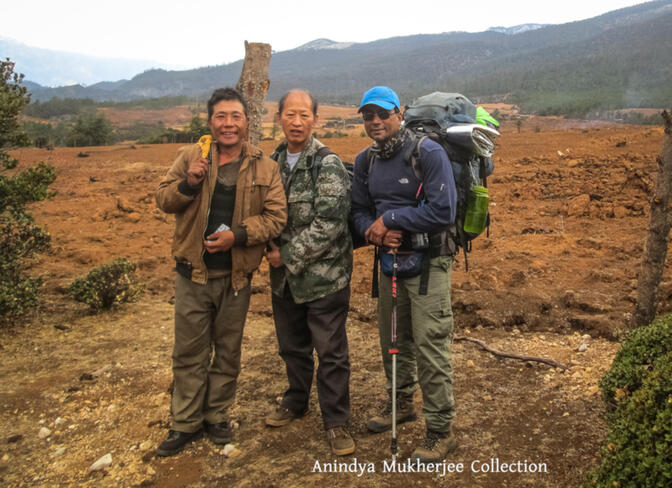 While the first great bend of the Jinsha is a popular tourist destination from Lijiang these days, the second bend somehow remains unnoticed. Further magnification of the Google Maps image revealed a tiny village located on the western aspects of the southern end of this mountain range. It was marked 'Jidege' and I realized the remote village could serve as my base.

I reached Kunming from Kolkata by a short two hour flight and took an overnight train to Lijiang the following day. I spent three nights in Lijiang, first to gather authentic information on my proposed route and then to organize the logistics. During this span of days, my concern was to get an idea as to how to reach Jidege, which, I thought to be far from being a tourist destination.

That was a horrible understatement. With the help of the manager of the backpacker guest house where I was staying, who spoke some English, I could make several inquiries over the curious names that I had in my Google Earth printouts. Many of the names of villages or settlements marked on the Google Earth image were either incorrect or unrecognizable. Finally, we spoke to someone in Baoshan who recognized the name Gaohan (27°28'17.06"N - 100°17'47.92"E, 10,697 ft) and stated that it could be reached by car from the Lijiang- Lugu Lake road. 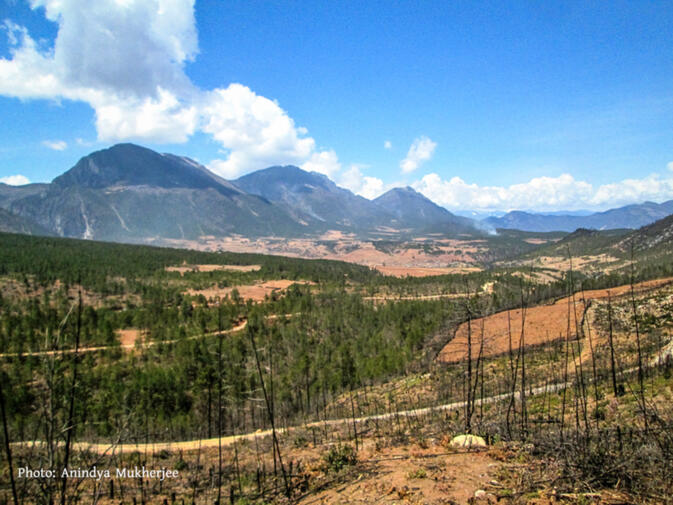 Gaohan (高寒) is a bigger village — at least when viewed on Google Maps — located due south of Jidege and is approximately 130 kilometers drive north from Lijiang. To be able to drive to Gaohan in a day meant a big logistical advantage. If we could reach the town, we would find a way to reach Jidege, or so we thought.

I managed to hire a local from Lijiang who agreed to double as my driver and interpreter. The manager of the backpacker hostel I was staying in expressed his desire to accompany me. I agreed as I saw no harm in this. On April 13, 2015 we drove to Gaohan village via Ming Yin. The village had an elementary school and upon our arrival we were told to go back immediately. We were warned that we could be attacked at night as some villagers thought we could be drug traffickers and strangers are not welcome anyway. 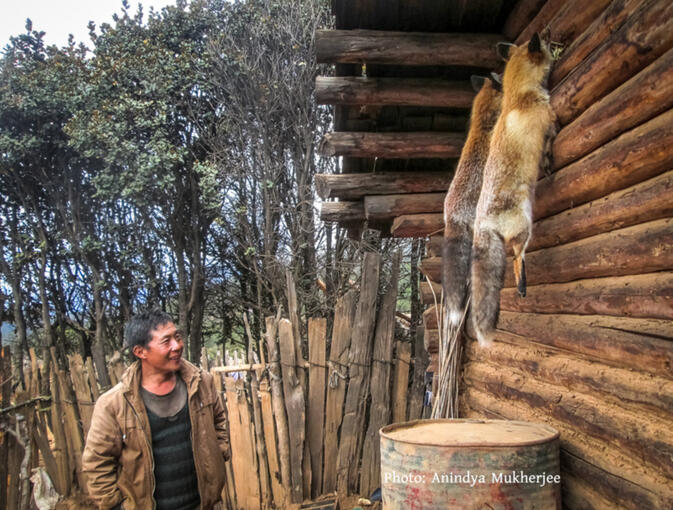 We were left with no choice but to backtrack to Ming Yin and spent the night there. Next morning with renewed hope we drove to Gaohan again. This time we were lucky to meet a teacher who helped us get in direct contact with a farmer in Jidege Village itself. The farmer named Lu agreed to host us in his house and we suddenly felt welcome in this beautiful land. We took our bags and started hiking uphill by an unpaved road. It took us about two hours to walk to Jidege (27°31'18.21"N - 100°17'44.54"E, 11,736 feet) from Shanggaohan and Mr Lu came down to meet us halfway.

Jidege is a Yi minority village and very Himalayan in appearance. I was told that I was the first foreigner in their village. A rare reward for a modern day explorer! Thus, for the next two days, Mr Lu's abode became my base camp. In the afternoon, I took out my maps and had interesting discussions with Mr Lu and his brother, who was also the village headman. 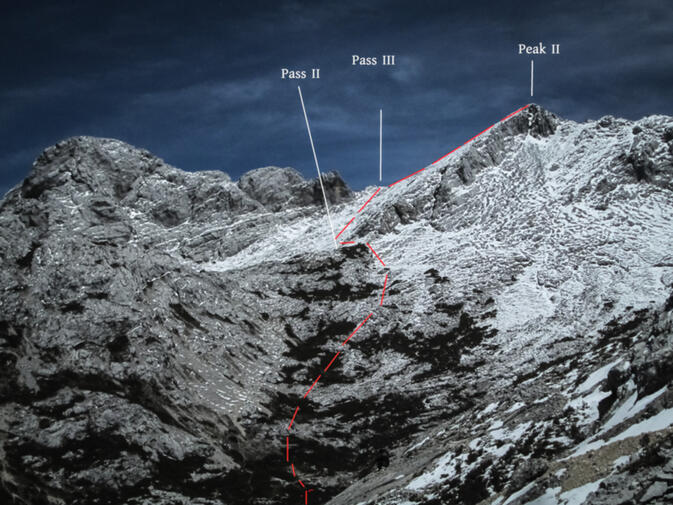 This pass and the adjacent summit is located on a ridge emanating due southwest from the main Jidege range and gave me a good opportunity to photograph the mountains. A series of unclimbed peaks were waiting for their first ascents and many of them I am sure will offer excellent rock climbing. I decided to come back the following day to climb at least one crest on the main range further up north and retraced our steps back to Jidege.

Reaching Pass III, we saw Jidege Shan dropping down north into the deep gorges of the Jinsha. Only one glimpse of the mighty river came into our view to our northeast and the rest of the course of the second bend of the Jinsha was well hidden from us as the gorge system is simply too deep. The wind was picking up and cirrus clouds quickly gathering to form an ominous grey blanket. I decided to climb the peak to the immediate east of Pass III. After another half an hour, and we were on top of the rocky summit. 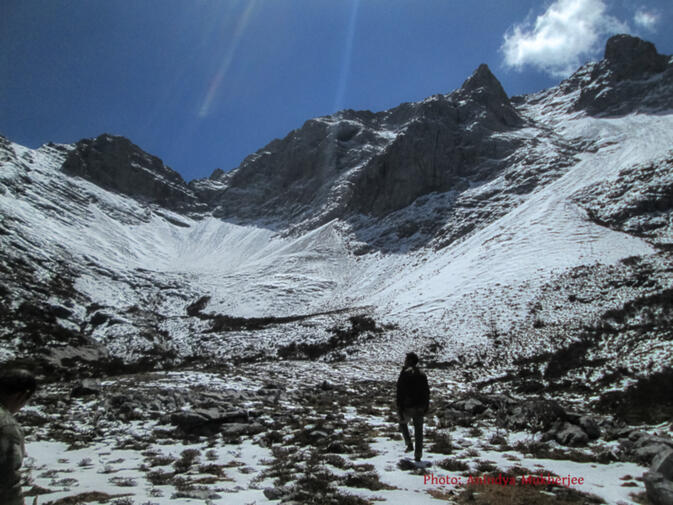 From top of the rocky peak (Peak II: 27°33'23.23"N -100°18'50.13"E, 14,500 feet) our vision opened up 360 degrees. To our south we saw Yulong Xueshan and Haba Xueshan. The missing horizon between Yulong and Haba indicated the obvious depths of Tiger Leaping Gorge. To our west we saw the mountain ranges of Diqin and Shangri-la near the border of Tibet. To our north and east we saw the mountains of Sichuan. We could see roads on the northern slopes of Jidege, winding down to the river, probably to one of the hydro-electric stations nearby.

After climbing Peak II, noticing that we still had a good amount of daylight in hand, I decided to go down to another pass-like feature located due north of Pass III. There were patches of snow on scree which we had to descend to reach this pass. Once there, I could see a faint trail winding down towards the motorable road further down the valley. I decided to stop moving further at this fourth pass (Pass IV: 27°33'36.19"N - 100°18'57.42"E, 14,164 feet) as it was evident that we had reached the northern ends of the Jidege ridge.

A sense of satisfaction engulfed me. I did not reach the exact coordinate point as suggested earlier by Mike Dobie, but I was very close. I tried and in the process I have explored a largely unknown mountain range and possibly made a first ascent of one of its many peaks. I was standing on the mountain range that I once longed to see and explore. The quest that began on a computer screen a few months back was now suddenly over. It was time to head back. 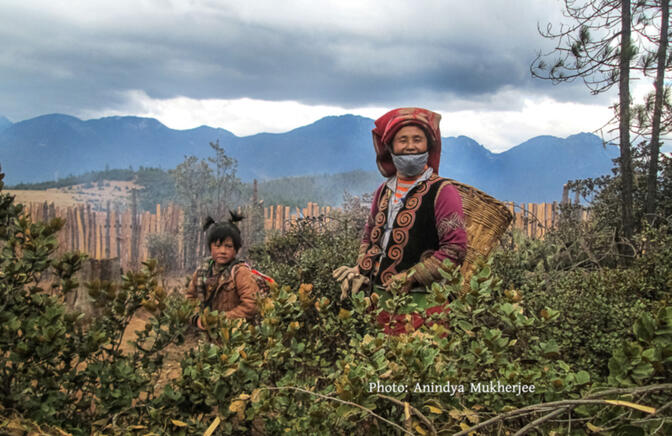 Editor's note: All coordinates are based on Google Maps and hence may not be accurate. We found a forest trail used by locals from Jidege to Pass III. This trail is used for hunting and the collection of caterpillar fungus, and other herbs used in Chinese Traditional Medicine. Special thanks to Anindya Mukherjee for providing this article. Mukherjee runs a mountaineering company called Adventure Mania (requires proxy) specializing in ascents in the Himalaya mountains. More of his writing and photography can be found on his blog (requires proxy).