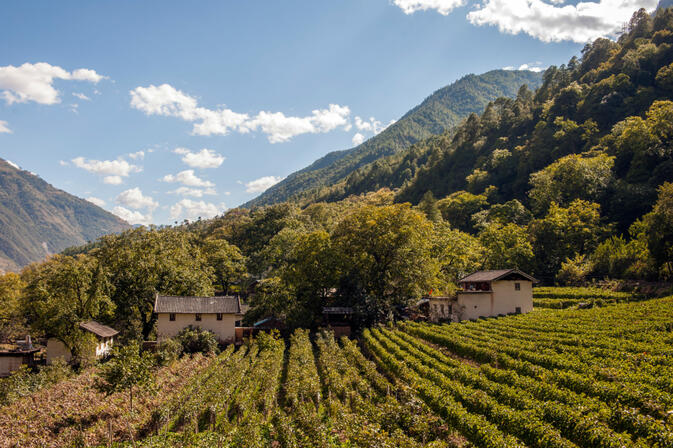 One of the largest luxury brand conglomerates in the world is preparing to release a new vintage of wine out of China later this year. Executives at Moët Hennessy (LVMH) have said they hope their new Ao Yun (奥云) Cabernet Sauvignon, which is produced entirely in northwest Yunnan, will be "the best-quality red wine in China".

Although little-known to many, the region of Yunnan now known as Shangri-la — especially Deqin County (德钦县) — has long been a grape-growing one. More than 150 years ago, Jesuit missionaries from France introduced a honey rose strain of Cabernet grapes to the area, where they have been cultivated on a small scale ever since.

The long, if limited, history of viniculture in the province's northwest is part of what first attracted the interest of LVMH producers. They will not be using the honey rose varietal in their new vintage, but without the tradition of wine-making in places such as Deqin, few would have believed that French grapes rarely grown at elevations above a few hundred meters could thrive on Chinese mountain slopes soaring to 2,600 meters in height.

Instead, Ao Yun is made from other imported appellations. Moët Hennessy Estates and Wines president Jean-Guillaume Prats recently told website Decanter the process has been full of trial and error:

We spent four years searching for the right location for quality red wine in China. There are many logistical challenges to producing in this remote mountainous region, but the long growing season and dry sunny autumns [produce] thick-skinned, small berries with concentration and freshness.

The vineyards in Deqin are fairly small, comprising a total of 30 hectares spread over four local villages. They are 66 percent owned by the French conglomerate and 33 percent by VATS Group, a Chinese wine and spirits company. In addition to its investment in the grape-growing areas, LVMH reportedly sunk 120 million yuan (US$19.3 million) into a nearby fermentation facility and upscale lodge for visiting connoisseurs.

The international launch of Ao Yun — which its bottlers translate as 'sacred cloud' — is expected to occur in October of this year. However, Chinese aficionados, who are projected to purchase more wine than consumers in any other country by 2016, must wait until early next year to purchase bottles of China's newest and most exotic wine.

Thanks Patrick for the update! Planning to revisit the site of the Moet winery and lodge in the next couple weeks, perhaps after I get back to Kunming a new blog style update for GoKunming on my work out here will be due...

is this the yunnan hong that got caught artificially boosting the alcohol content a while back.

No, this is high quality French produced wine using organic grapes grown in Deqin. Yunnan Red has no connection to or affiliation with Moet.