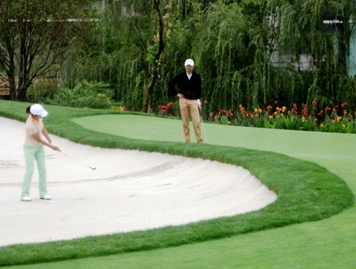 Despite the continuing rains, Yunnan's top young golfers competed in the inaugural provincial championship of the Faldo Series Asia in Kunming Friday. Forty competitors, aged seven to 21, managed to squeeze in two rounds of golf over two days, between bouts of rain.

The tournament was held at Lakeview Golf Club, designed by British golfer and six-time Major winner Nick Faldo. It is one of 10 events composing the Faldo Series Asia, launched in January of 2006 as the Asian counterpart to the Faldo Series Europe. The series kicked off last week in Shenzen, and will visit locations throughout Asia before returning to Shenzen's Mission Hills for the grand final.

"[Faldo] wants to nurture young players—the fitness side, the mental side, the professional side," says Tom Phillips, CEO of Faldo Enterprises Asia, based in Hong Kong. "The idea is to increase general interest and help the best move on to the professional level."

One player who hopes to compete at the next level is 20-year-old Guo Caizhu. She shot a 76 on Thursday and a 74 on Friday to emerge the overall winner of the Yunnan championship.

"The rain delay helped me," Guo said of the weather woes that plagued the event. "I was nervous in the beginning but I felt better after the break." She picked up golf just two years ago after taking a job caddying at Lakeview so she could practice her English with foreign employees there. But instead of enhancing her vocabulary, she picked up a mean tee shot. Guo and five other local golfers played their way into the field of 60 for the series championship at Mission Hills in Shenzen in December. She hopes to improve on her performance last year, when she placed second in the girls' 19-to-21 division.

Joining Guo in representing Yunnan will be Gyin Qin. The 15-year-old won the 15-and-under division with a total score of 155, and will compete in the boys' field at Mission Hills. "I learned quite a lot today," Gyin said. "I learned more about the rules of the game." Gyin, Guo and the other winners were honored with a championship ceremony, and all of the players were invited back to Lakeview for a clinic to be given by Faldo in December.

The series' goals are to increase interest in the game among young players, and to identify and develop Asia's top amateurs. To that end, all the events include education along with competition. At Lakeview, participants were evaluated by a golf fitness specialist, who will provide each of them with an individual assessment of strengths and weaknesses. 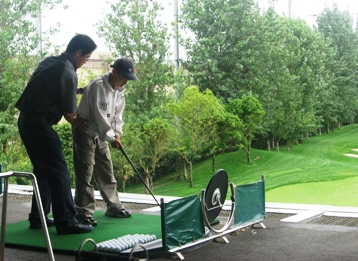 In addition to the 40 tournament entrants, about 15 local school children attended the event. They received instruction on driving and putting from Lakeview Director of Golf Dave Goh and other pros, and stood by the 18th hole to watch as the golfers finished their rounds.

Lakeview will host a pro event August 23 through 26, when the Omega China Tour comes to Kunming.