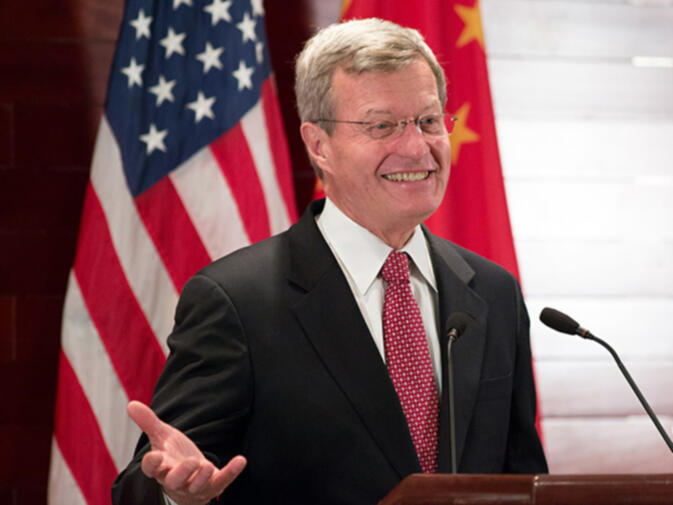 United States Ambassador to China, Max Baucus, giving a speech in Beijing in 2014

The highest-ranking United States official in China spent time traveling across Yunnan this week. Ambassador Max Baucus' trip south of the clouds lasted five days, during which he switched hats between that of well-heeled tourist and diplomat.

Baucus first visited Xishuangbanna, where he explored a cross-border elephant reserve that extends south into Laos. The goal of the ambassador's multiple stops in Yunnan was to "promote cultural exchanges between China and the United States and allow more Americans to understand southwest China", according to a report by Yunnan Net.

Another travel destination on the itinerary for Baucus was Xizhou. There, he called on the founders of the Linden Centre, Brian and Jeanee Linden. The ambassador recognized the couple for their architectural preservation work and cultural outreach programs, which are centered around their boutique hotel and retreat set inside a restored Bai minority building complex.

Those two stops were not only covered by Chinese media, but were also reported on by Baucus himself. The ambassador used mobile messaging and social networking platform WeChat to share photos from his travels in the province and, in his own words, "let my friends know more about Yunnan."

Baucus ended his Yunnan trip in Kunming, giving a speech at the Flying Tigers Museum, which is housed in a wing of the Kunming Museum on Tuodong Lu. He suggested filmmakers in the United States and China should work together and produce a film telling the story of how servicemen from the two countries joined forces during World War II.

Telling the story of the Flying Tigers, Baucus argued, would not only illuminate an oft-forgotten part of history, but could also provide a showcase for many of Yunnan's more beautiful landscapes. "We cannot forget the bravery and sacrifices by men and women on both sides that came together for a common cause," he said.

His Yunnan trip was part of a promise Baucus apparently made to Chinese President Xi Jinping in 2014 shortly after being named ambassador. "When I first came to office, I assured President Xi I would travel to every Chinese province — not just to have a look, but also to learn about each place," he said.

While fulfilling his pledge to Xi may be imminently doable, getting a hagiographic film made about the Flying Tigers might be much more difficult. Nearly six years ago, director John Woo was slated to team up with Tom Cruise on just such a film. Although the movie was slated to be the most costly ever shot in China, it was never made.

A good film on the subject would be most welcome, but hagiography is a bad idea.

Yeah, they should make a film about their involvment in the 8-Nation Axis during the Boxer rebellion instead. It would be more balanced if they depicted Boxers killing Christians on one side and on the other side, Westerners from the 8-nation Axis looting villages, raping and mutilating Chinese women while the Japs beheaded the men.

I uncovered a really interesting article in an old national geographic about the American GIs of the period.

At night they used to drive their jeeps to a nightclub called the 'United Nations Club' and drink 'air raid juice' which was probably baijiu and apparently resulted in their inability to find their way home.

Nice to see some things haven't changed, even if it's the locals now driving and the Americans catch taxis.

Before 1940's, the French in Kunming used to host opium-evenings, while listening to a grammophone. This was around Jinbi Lu. This has probably changed to some degree.

Yelp1719: Have photographs, send me an email or private message and I can probably email them to you. For copyright reasons I wont post them online. (Nat Geo still try to sell their really old photos!)

Most foreigners used to hang around old Yunnanfu train station area, where Jinbi Lu/ Shulin Jie are now located. The French particularly around the old colonial hospital that is on todays Houxin Jie. There was a French hotel too and some of them earlier authors said the whole hotel smelled opium. (This hotel thing I think is written in "In and round Yunnanfou" - at the moment unsure.)

Hell, I am on the road now and cant recall the source for the opium smoking parties right now. The description was quite detailed too, that the opiate evenings were hosted around 20:00, frequented by plenty them scientists, and everyone sat quietly in a sofa listening to a grammophone.

If you need this source for some other purpose (say, scientific etc.) rather than just curiosity, then send a pm and I dig it out within coming 10 weeks, or so.

Due to the effects of the Pacific El Nino on extending the Monsoon season, un-rest in Myanmar and their military air actions agaist the Kokang rebels, FTHO has had to adjust the scedule for our HUMP re-enactment flight to mid-October. Altough we will miss the 70th. Anniversary of the end of the War Against Japanese Aggression & WW II celebrations by a month, plans are still underway to fly our C-47 from India to Kunming over the HUMP. We will keep Go-Kunming informed with better dates as time nears.