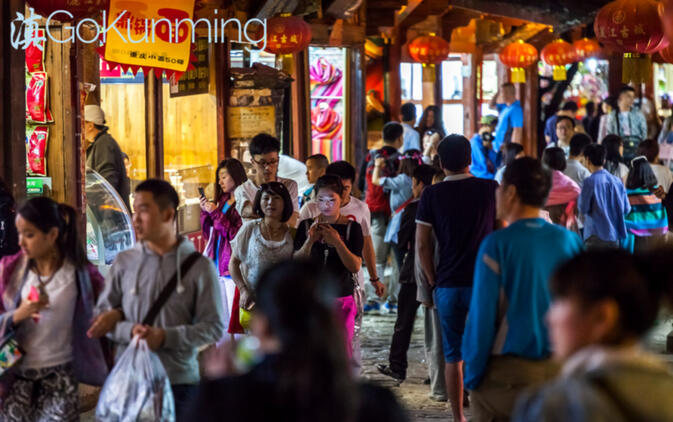 Representatives from across the province recently wrapped up an annual planning session in Kunming. Nearly 600 delegates attended the Yunnan Provincial People's Congress, where they discussed budget allocations and growth strategies for the coming year.

Of the dozens of speeches and campaigns proposed during the meetings, one has stood out from the rest in terms of media coverage. Zhang Zejun (张泽军), mayor of Lijiang, has made national news for announcing a crackdown on vulgar or otherwise "sexy ads" encouraging people to visit the old towns of Dayan (大研) and Shuhe (束河).

Zhang was quoted as saying that many old town establishments under his jurisdiction — especially bars and guesthouses — actively promote themselves by posting print and video advertisements hinting at illicit sex. "Publicity stunts containing sexual innuendo run against Lijiang's traditional culture and must be ended," the mayor said in a speech given January 29.

Suspected businesses in Shuhe and Lijiang, according to Zhang, will be investigated through spot checks running now until the end of June. Oddly, such work will reportedly be carried out by a team of 70 firefighters. Those establishments found to repeatedly utilize ads deemed inappropriate or crass may face closure by authorities.

Although never using the word 'prostitution', Zhang did say he does not want Lijiang to become know as China's "capital of romantic affairs". He went on to say he is specifically worried about the preservation of Naxi culture and concerned by how some tourists have come to view the idea of Mosuo 'walking marriages' (走婚). Although the Mosuo and Naxi are culturally distinct, they are nonetheless grouped together by Chinese scholars.

Lijiang's mayor himself is Naxi, and has recently instituted incentive programs and subsidies promoting more Naxi to move back to old town areas and establish homes. Before transforming into the tourist hotspot it is today, Lijiang was declared a UNESCO World Heritage Site partly because of its unique cultural traditions little known to the outside world.

However, before the old town of Dayan was included in the reputable list, a devastating 7.2 magnitude earthquake decimated the city in 1996. Rebuilding efforts tended to focus on constructing a town with an ethnic facade that was more commercial in nature than it ever had been before — largely at the urging of locals themselves. It now appears that some aspects of that materialistic bent, for the mayor at least, have been pushed too far.

There was an interview a few years back (on TV) in which Lijiangs famous Naxi musician (and cultural ambassador) Xuan Ke said Lijiang died around 2005.

I mean, these things are of course welcomed, but here's another thing 10 years too late.

Well...no use to cry over spilled milk, but maybe this examples/mistake could lead the way somehow.

One could imagine that a country like Burma/Myanmar would look at its neighbors and say "hey lets not fu*k up the air and traffic like our neighbors do", oh no, its still the same. Stupidity.

No problem with the brainwash, if it cleans up the zombies, the gutter oil, the air, rivers and corruption.

Its better than anarchy. And it was getting there..

I mean the brainwash of 'modernizing' everything, converting all into 'entertainment'. It sells tickets.

Jim Goodman's excellent article on what happened to Lijiang
www.gokunming.com/[...]

Another reason to consider revoking the World Heritage Status. I don't think there are any precedents for this, but now China has so many such sites I think the political fall out will be much less. I think that the original mistake was putting the matter of reconstruction in the hands of someone so inexperienced.

The matter is probably about cash. First your create a circus, and in 15 years suck out of it as much as possible. When the concept starts declining, then its about time to invite a new concept, and try to sell a somewhat same thing with another name. Business in Lijiang was declining at least the last 1.5 years.

So, if I read this article correctly, the mayor of Lijiang just inadvertently publicly announced that Lijiang, specifically the districts of Dayan and Shuhe, have an implied widespread issue of illicit sex with rather overt advertising?