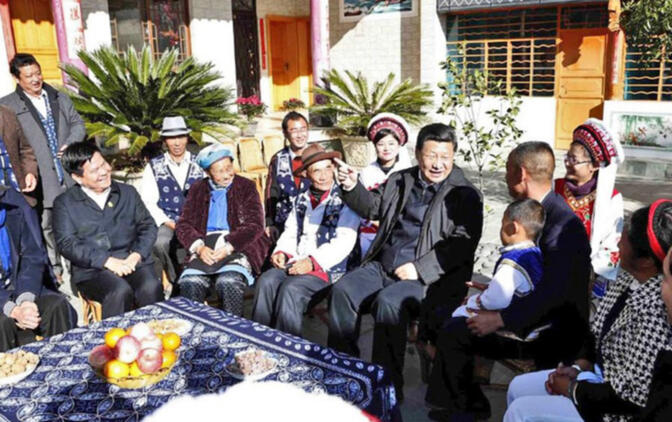 Chinese President Xi Jinping wrapped up a three-day "inspection tour" of Yunnan on Wednesday. During the speeches that peppered his visit, he repeatedly stressed the importance of speeding up development in the county's western regions and raising up those living in poverty, according to a Xinhua report.

Xi first visited Ludian County in northeast Yunnan. The area was the site of a destructive 6.5 magnitude earthquake in August 2014, which claimed the lives of more than 600 people. Upon noting the progress of rebuilding efforts, Xi explained to reporters the need for accelerated maturation of China's underdeveloped areas, saying "[There are] only five to six years left for us to complete the building of a moderately prosperous society in all respects, time will not wait."

The president also visited the town of Ganjiazhai (甘家寨), where 50 villagers were buried in a landslide triggered by the Ludian earthquake. Hundreds of families there still live in plastic tents provided by relief agencies five months after their houses were destroyed. Xi reportedly told them "...the disaster destroyed your homes, but the Party and the government will help you build more beautiful ones."

The next stop on Xi's tour was Dali, where he reviewed conservation efforts around Erhai Lake. Then it was on to Kunming, where the president met with members of the Dulong ethnicity (独龙族). The Dulong are perhaps China's least populous ethnic minority, and number around 7,000 people living in remote villages clustered near the northern reaches of the Nu River Valley. At the meeting, Xi pledged that no ethnic group, no matter its size or remoteness, would be excluded from the 'Chinese Dream'. Xi was quoted by Xinhua as:

News of Xi's Yunnan visit was covered somewhat tepidly in the Chinese press until its completion, eerily mirroring a 2009 trip by then-president Hu Jintao. Six years ago, Hu came to Yunnan unannounced for four days, visited with survivors of an earthquake, addressed poverty and development issues, and, while meeting with minority representatives, spoke of the importance of ethnic unity.

I think it's absolutely great that Xi JinPing came to Yunnan - demonstrates at least on the surface that this province AND minority groups are important to Beijing.

Most look at the visit as a sign of impending FREE GOVERNMENT MONEY inflows - but I prefer to think of commercially viable solutions to help villages become more profitable - as they're generally more sustainable and done properly - socially viable and socially valuable.

you love 'em don't you haha

Chinese New Year we will visit my parents-in-law on the countryside like every year. Let's check what did improve there over a year...in comparision to Kunming or even smaller towns. Maybe they got some new meters of asphalt or some bricks to repair their houses. They're still years behind and no big changes in sight. Still the people there don't complain!

in terms of architecture, and in general, i hope imagination and tradition can synthetize.

i believe some progress could b made in chinese urbanization and building, for instance much more green spaces

i hope also poverty alleviation can b reached, kerping communist ideals of equality between people, in terms if resources, rights and opportunity