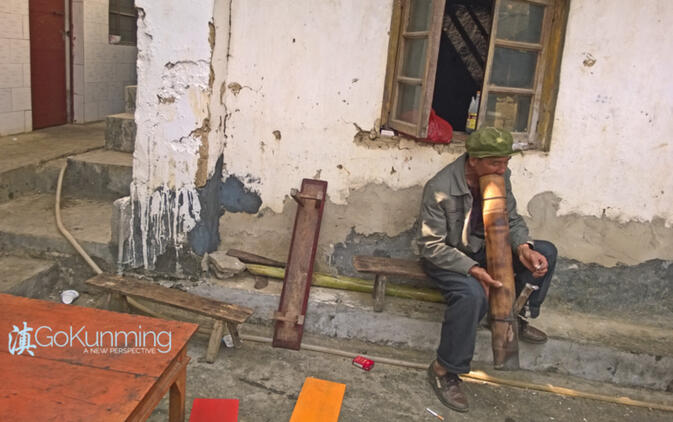 The mountains are high and the emperor is far away (山高皇帝远). It is always a little fun when Kunming shows just how far removed it really is from Beijing. While in no way openly rebellious or willfully truculent, Yunnan's capital, and by extension the province itself, often seems to march to a slightly different and slower drumbeat. The most recent example of this contrast is currently playing itself out over the issue of smoking.

Beijing is setting itself up to have the most stringent anti-tobacco laws in the country, reportedly set to ban smoking indoors entirely and forbid radio, television and film ads for tobacco from running in China's capital beginning in June 2015. Fines for violations of the new edicts are also set to jump dramatically, from the current ten yuan to a proposed 200 next summer.

The reforms in Beijing may be a litmus test for the country as a whole — a reboot of the woefully unenforced 2011 national ban on public smoking writ small. If sweeping reforms can be properly regulated in the nation's capital, perhaps the rest of the country will follow suit — or so goes the thinking. It may take Yunnan and the Spring City a long time to catch up.

In Kunming, taxi drivers still smoke in their cabs, managers at the vast majority of restaurants and bars make no attempt to discourage customers from lighting up and even in hospitals, people puff away with impunity, often out of meter-tall bongs. Cigarettes and smoking are a part of Yunnan's culture, perhaps more-so than anywhere else in China because the province was and is so dependent on farming tobacco as a cash crop.

Change does appear to be coming. Reform to tobacco statutes may be slow in developing — almost comically glacial when compared to what is happening in Beijing — but such considerations are now being discussed, albeit on a very small scale. At a public hearing held December 10 by the Landscaping Bureau of Chenggong, government officials and citizens discussed the pros and cons of a proposal that would outlaw smoking in all of Kunming's public parks.

Chief among the topics examined were whether cigarettes should be banned entirely, or instead, smokers relegated to prescribed areas within the city's seven major green areas. Fines were also discussed, although park management officials were skeptical that proposed 200 yuan penalties for those caught smoking would go over well with "people who have come to the parks to play majiang and smoke for the past 30 or 40 years."

Other suggestions addressed attempting to change Kunming's culture of smoking rather than trying to fine it out of existence. Parks, said these proponents, should contain billboards extolling the virtues of not smoking while highlighting health dangers and environmental concerns such as forest fires.

None of the recommendations made during the Wednesday meeting were binding. Instead, the discussion was held as an open platform for public input as park officials take baby steps toward a policy they must know will anger many Kunming residents. Despite such fears, Kunming may have to adjust sooner rather than later as Beijing is also mulling stiff new taxes on tobacco products that would effect all of China — a reality Kunming will not be able to embrace in its typical slow and plodding way.

Should we blame the foreigners who impose their will on other cultures for this new law also? The debate rages on!!! He He.

Even in the universities the professors will smoke in research laboratories, conference rooms, auditoriums that have clear no-smoking signals, they are the bosses and all have PhD.

In the UK and probably many other 1st world countries, smoking has been reduced greatly by attacking it from all angles. Huge amounts of tax to pay for the damage it does (and encourage smokers to cut down), huge warnings on the packets, plain packaging, total smoking bans inside public places (which includes bars and nightclubs). It's working. In my generation it is unusual to smoke, and all smokers I knew either gave up or try periodically to give up.
But the UK is a very orderly, polite, rule following country. In China people only follow rules if (1) that's what the majority are doing and (2) they are likely to be caught and heavily fined (i.e. more than 100元) for breaking them. Tell the police that they can keep half of the fine money, and watch them get to work!

They could start by enforcing the exisiting laws about not smoking in restaurants. Random visits and fines for the owners to make them plice their own restaurant in future. Banning smoking in parks should be way down the list as most of it is outdoors.

Yeah, really funny that they're worried about smoking in public parks. The Yunnan tobacco economy can't possibly not be what this is about. Token nonsense - you can't smoke outdoors, but you can smoke in restaurants!

Amazes me how McDonalds and KFC can have 100% no smoking in their restaurants. It is rare to see a smoker go in either of these places.

Flicking lit butts out the windows of moving vehicles is a huge factor in creating forest fires in yunnan. This is a pratice which should be strictly forbidden and enforced with huge fines as the results are often expensive in rmb in addition to a substantial loss of natural resources .

Chinese law is "wanna be cool? Suck on that, yeah stop smoking is for pussies! Chinese gangster way!

i guess i'm a pussy then.

"In the UK and probably many other 1st world countries, smoking has been reduced greatly by attacking it from all angles."

Several developing and 3rd world countries have ratified laws for high taxation, complete bans on public tobacco usage and advertising since the 90's. However, the UK and other 1st world countries have been emulating those bans more recently, probably wanting to know if it would also have an impact in their country. I remember when they started banning smoking in pubs a couple of years after I finished my studies in England. At the time it was very annoying to have to synchronise every time we needed to go outside in the cold for a puff.

Smoking is nasty and smokers suck the big one.

I'm glad I quit years ago.