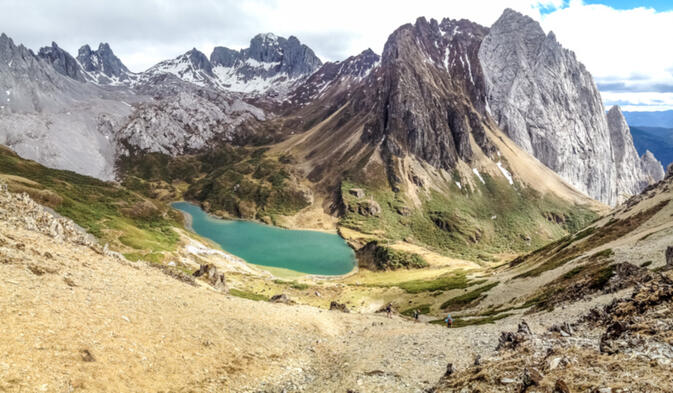 Long distance running is not a spectator sport. Watching Usain Bolt explode into a sub ten-second flash of speed, power and muscle is fun. Watching a marathon — a pack of skinny, sweating guys in little shorts grimace — for more than two hours is boring.

The internet is awash with videos of climbing, skiing, surfing, kayaking and mountain biking — of amazing athletes doing insane, spectacular stuff, exciting to watch even for someone who would never dream of putting on skis or tying into a climbing rope. Trail running, a fellow outdoor sport and a huge market where products need exposure and advertising, cannot compete here.

If you have a choice of watching a skier rip down a near vertical slope at 100 miles per hour while making stratospheric leaps over rock faces, or watching a 100-kilometer runner go down a rocky trail relatively fast, you will go for skis over little shorts every time. There is, however, a way to solve this problem. 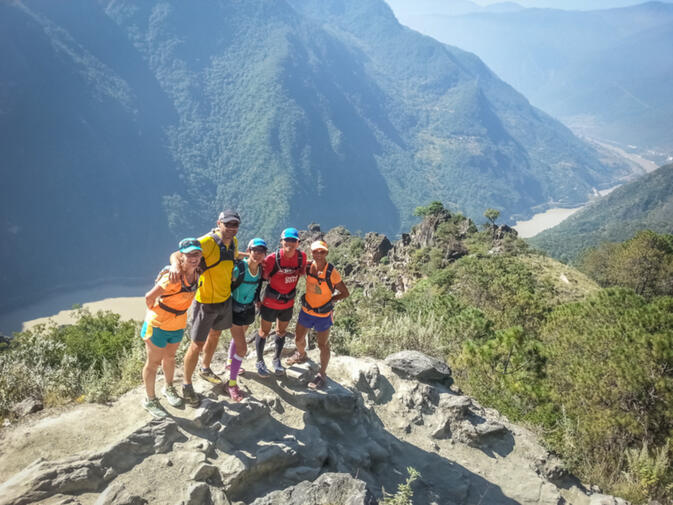 In late 2013, a team of ultra-runners sponsored by North Face from the United States, mainland China and Hong Kong ran from Dali to Shangri-la, passing through Taoyuan, Shaxi, Lijiang, Tiger Leaping Gorge, Haba Snow Mountain, the White Water Terraces and Abuji Lake. They roughly followed the course of the ancient Tea Horse Road with a crew of outdoor filmmakers in tow.

The North Face Tea Horse Trail Running Expedition, as it became known, was the brainchild of Kami Semick, a North Face-sponsored athlete from Oregon. She has been voted World Female Ultra-Runner of the Year twice, and her running CV, in addition to national 50- and 100-kilometer titles, reads simply "numerous wins at ultra distances". 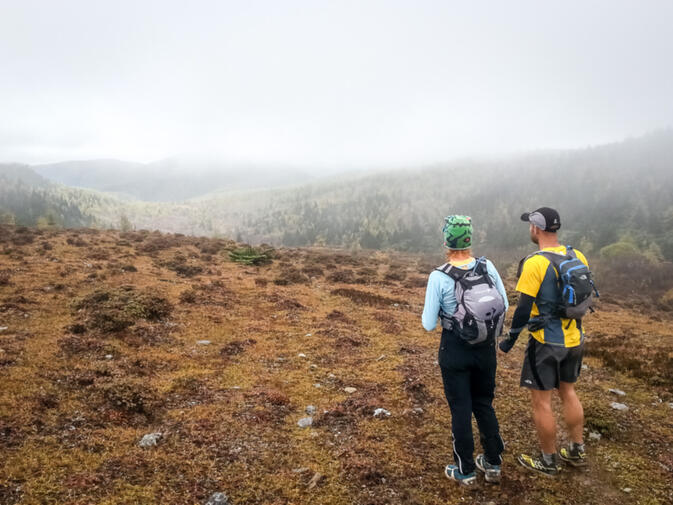 Rudy Gilman, my long-time running partner, and myself, had trained and raced with Kami, and were fortunate to be chosen by her as guides, translators and logistics organizers for the Tea Horse Trail Running Expedition. The route was put together by Ed Jocelyn, a British-Australian historian based in Dali — an expert in all things Tea and Horse Trail, Yunnan, and China in general — and famous for having trekked the entire course of the Red Army's Long March.

One of the best parts of dealing with a major brand is the equipment sponsorship. For the film we had to be decked out in the North Face gear, from socks to hats. Two weeks before the expedition got underway, two large boxes arrived at mine and Rudy's apartment, packed with the latest North Face kit. Having opened the bags — excited like five year-olds on Christmas morning — we put on as much of it as we could, wrapping ourselves in down sleeping bags for good measure, before taking silly photos of ourselves.

Starting from Dali, our first destination was Pear Orchard (桃园), on the shores of Cibi Lake (茈碧湖). After having trudged to the orchard, we had a copious meal which turned out to harbor truly lethal bacterial fauna. The bugs found our digestive systems to be excellent habitats, crushing with demoralizing ease the immune defenses of even the elite ultra-runners among us. Even Kami, who has the strength and determination of a cyborg, and, as far as I can tell, is made out of pure iron, looked very rough in the morning.

Nikki Kimball, another American, who divides her time between bow hunting in her native Montana and setting speed records on famous trails hundreds of miles long, was looking pale and weak. She put on a brave face, ready to soldier on after a night of non-stop vomiting. Xing Ruling (邢如伶), a female runner from Beijing, was also struggling, hit by both bacteria and altitude. I passed an uncomfortable night punctuated by emergency dashes to the toilet, while Rudy spent his vomiting. Our team was decimated, and it was only day two. 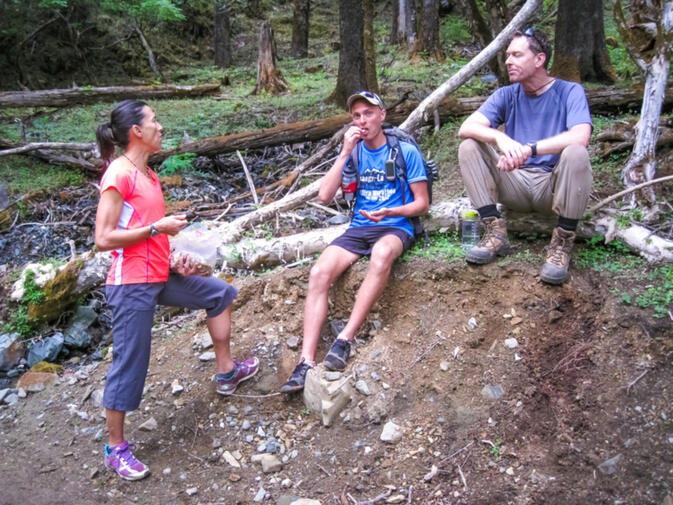 During the expedition, Rudy and myself took turns, one of us running with the team, navigating, while the second person was in charge of coordinating several vehicles containing film crew members, water, food and medical help. These had to be guided along the route and the access roads, and inserted at various points along the runners' trajectory without slowing the pack down. Running and navigating was much easier and far less stressful.

The film crew was a Hong Kong-based outfit called Spontaneous Combustion, who specialize in filming outdoor sports from the air. The Combusters, as we called them, were very fit, very British, very professional and came equipped with a small squadron of aerial drones which resolutely refused to fly in the rarified Yunnan air. 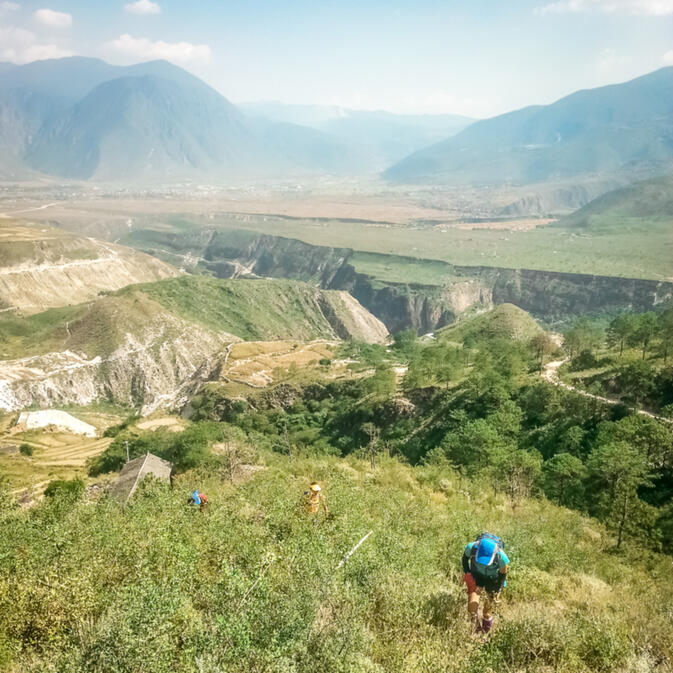 The inhabitants of the Jianchuan plain enjoyed immensely the spectacle of a tall foreigner pulling at toggles on a remote control, swearing out loud as a drone reluctantly took off, gained a few meters of altitude, then lurched to one side and went down as if hit by a missile, bits of wooden rotors flying as the contraption hit the ground. The drones agreed to cooperate only in Tiger Leaping Gorge, flying with a purposeful buzz above our heads as we ran, probably as impressed by the scenery as we were.

The Combusters were looking for things — other than us running slowly — to film, and the Pear Orchard Bacterial Affair made for some good footage of intravenous drips, emotional interviews and team bonding. Another piece of drama, welcome from a director's point of view, was the crossing of a high pass near Abuji Lake. The highest point was almost 5,000 meters up, and in bad weather it turns into a freezing wasteland lashed by wind, snow and rain — with close to zero visibility. I had spent two days stuck there in bad weather with Ed on the route reconnoiter, and was extremely happy to let Rudy guide the runners that day. 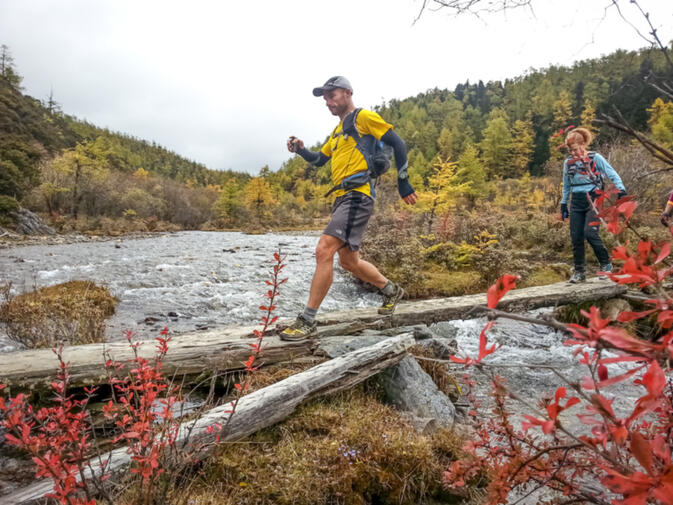 We woke up at White Water Terraces (白水台) to the sound of rain and mountains hidden behind heavy fog. I suggested skipping the high mountain stage, remembering mine and Ed's sodden freezing camp up there a couple of months previously. But Kami and Rudy decided to try. I took a support van with a driver and we sped through an enormous loop to the other side of the pass and waited. The mining road we took led us to a high pasture, by then (it was October) empty of Tibetan herders. The pass looming above, invisible behind a blanket of fog and rain.

We waited for hours. It was getting dark and the Naxi driver was getting more and more uncomfortable. He was muttering that it was a bad place to be at night — in a wild forest devoid of people — and when I went out to look for the runners, he pulled out a fierce-looking knife from under the seat, locked all the doors and sat tense and motionless in his seat, ready to counter any attack that might come from the darkness of the forest. 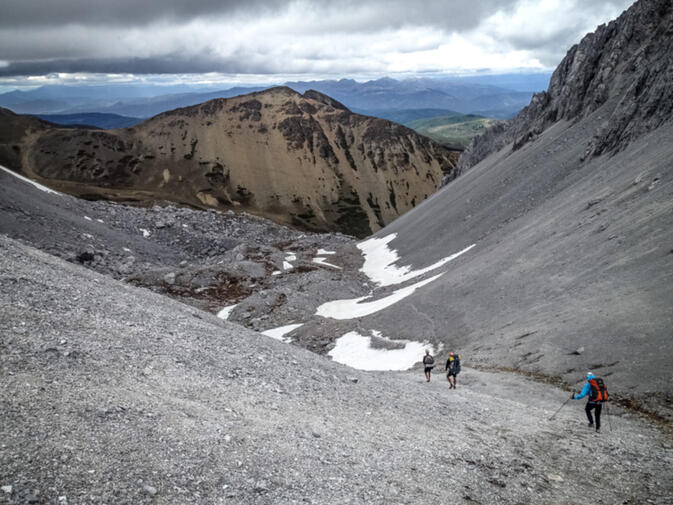 I wandered around the woods in the direction from which the runners should come, when finally, almost in complete darkness, and to my great relief, I heard voices. The pack was very happy to see me, and even happier at the sight of the oranges and pastries I had prepared. Apparently, below the high pass, David the Combuster, who was the cameraman for the day, took a step to the side of the trail and simply vanished into the fog. The sound of his emergency whistle was drowned out by the howling wind and it was a good while before the Combuster could be located and reunited with the pack.

The last day's 40 kilometers into Shangri-la were pure joy. For Rudy and myself there was no more stress of having to juggle drivers, vehicles, Combusters and hotels, and the runners' guts were by then free of Pear Orchard bacteria. On our final descent into Shangri-la we were busy discussing our future Running Very Far in Very Pretty Places projects, undecided between the Trans-Amazonian Highway in Brazil and a run across the Changtang (羌塘) in Tibet. 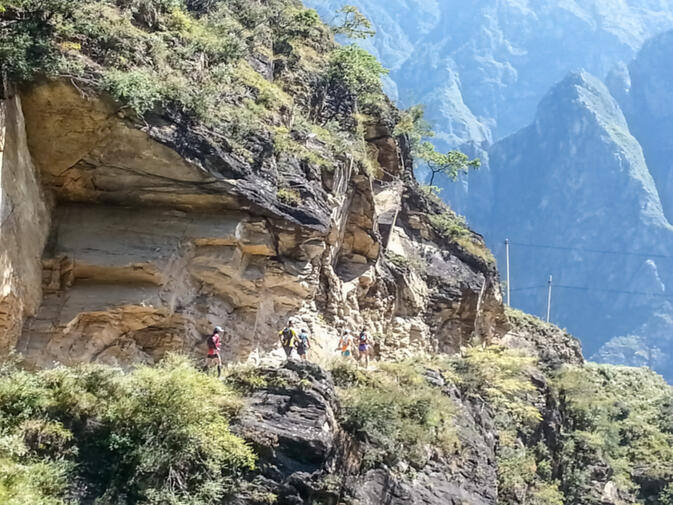 Editor's note: This article was written by GoKunming contributor Pavel Toropov, an ultra-runner now sponsored by Julbo, Beijing Travel Mouse Outdoors, Hoka and 2XU. If you have a story idea, feel free to get in touch with us via the contact form.