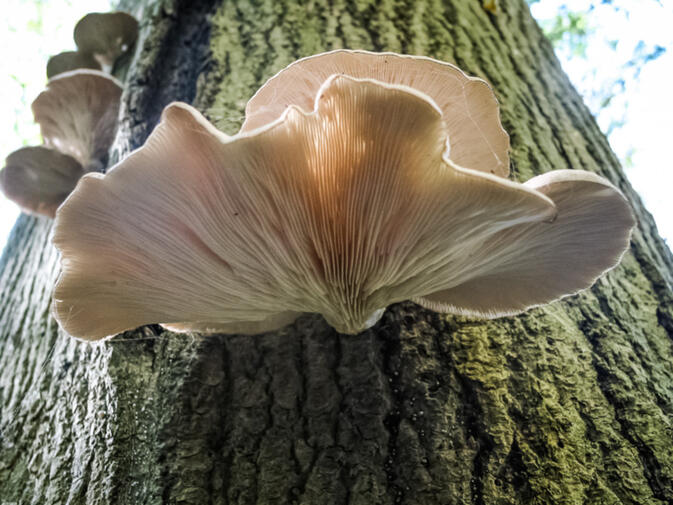 Summertime in Yunnan is when thousands of foraging entrepreneurs and amateur enthusiasts venture into the province's forests in search of valuable mushrooms. For most, this exercise is a way to augment incomes, enliven dinner tables, or enhance medical treatment — traditions likely as old as civilization itself in Yunnan. Across much of the Greater Mekong Subregion (GMS), people undertake similar forays into the woods for the duration of the monsoon season.

Identifying and gathering wild mushrooms in this part of the world is the focus of Mushrooms for Trees and People, a guidebook published earlier this year by the World Agroforestry Centre (WAC) in Kunming. Although not a comprehensive list of the hundreds of mushrooms known to grow in the GMS, the guide does catalogue 110 fungus species in a well-organized and accessible manner.

The book grew out of a 2011 conversation between Dr Xu Jianchu (许建初) and Peter Mortimer on how they could simultaneously help educate the general public and also promote their mycological research in GMS countries. Xu is based in Kunming, where he wears three hats — senior scientist at WAC, professor at the Kunming Institute of Botany under the Chinese Academy of Sciences, and director of the Center for Mountain Ecosystem Studies, an organization he helped found. Mortimer is a research scientist for WAC and an associate professor at the Kunming Institute of Botany. 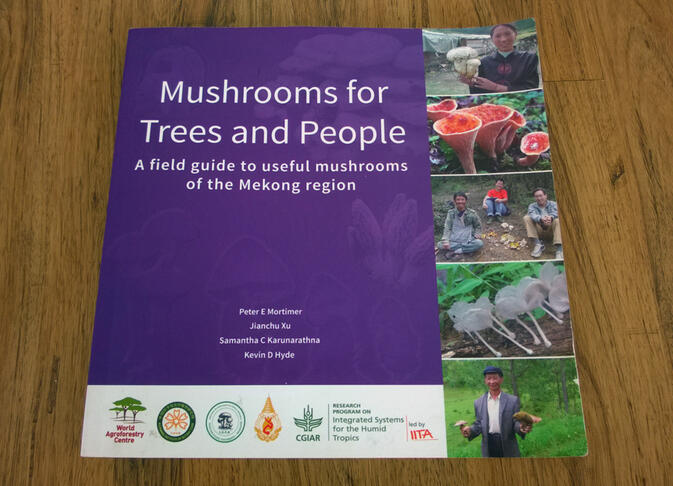 The two men are involved in researching how exactly fungi impact the environments in which they grow. Added to this, Xu and Mortimer are curious if they can find ways to incorporate mushroom growing into the lives of people who inhabit GMS forests. In addition to their research, according to Mortimer, they are:

investigat[ing] ways of utilizing mushrooms as a resource for rural communities. One way of achieving this is to introduce training programs on mushroom cultivation and set up demonstration projects in certain villages. Another way is to educate local mushroom gatherers on sustainable methods of wild harvesting, ensuring both long term harvests and forest conservation. This has proven quite successful, with increased incomes being generated by the villages associated with the harvesting training programs, coupled with a lower human impact on the forests where collections take place.

Xu and Mortimer decided to compile a field guide utilizing their research as well as survey data they, and others, had collected. With the help of co-editors Samantha C Karunarathna and Kevin D Hyde, they completed Mushrooms for Trees and People in eighteen months. The goal was to publish a compendium both simple and direct, a target which is largely achieved over the course of the volume's 125 pages. 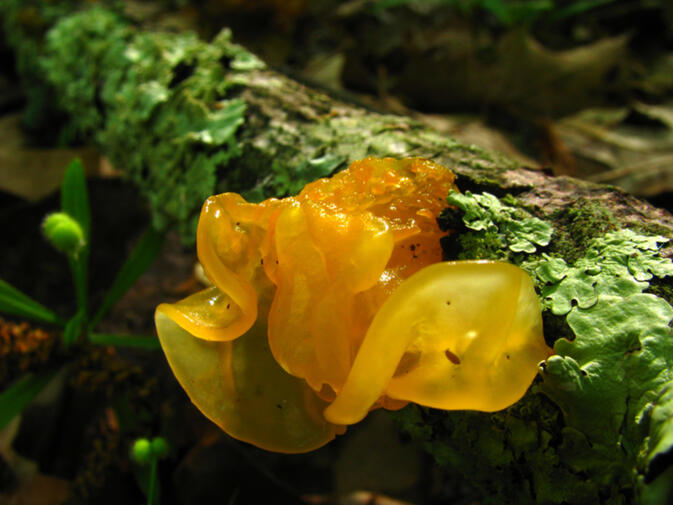 A brief introduction as to the nature and function of mushrooms sets the tone as the book gets down to the business of helping readers locate and properly recognize exactly what they may be seeing when they come across a weird fungus in the forests of Southeast Asia. What follows is an inventory of many of "the most common and valuable mushrooms" an intrepid collector may expect to encounter.

All entries are accompanied by color photos exhibiting each specific mushroom's most important visual characteristics. Scientific designations and more common vernacular names are listed, as are some Romanized versions from areas where a species is endemic. In addition, graphs are provided showing at which elevations and ecological zones in which a given species typically grows.

Other headings include fruiting time, habitat, distribution and, where necessary, annual harvest yields. All of this information is important, but besides the photos, perhaps the most essential facts given in Mushrooms for Trees and People are the physical descriptions. These are extremely detailed and useful, but at times, a bit technical. For example, the description of Termitomyces eurrhizus — known in Chinese as chicken mushrooms (鸡枞) — begins fairly, simply but quickly utilizes scientific jargon the average reader may not understand:

...Due to its nutritional and medicinal properties, T. eurrhizus is a much sought after mushroom species. To date, no cultivation has been possible due to its mycorrhizal nature. The pileus is plano-convex, plano-concave, the centre [sic] part is subumbonate and aspects of the margin are inflexed and split...

Despite technical terms, interested readers should not be dissuaded from consulting the book while harvesting their own mushrooms or shopping at the market. A handy glossary provided at the guide's end helps out when language in the depictions becomes difficult. Its inclusion is something mushroom hunters of all levels can potentially learn from. 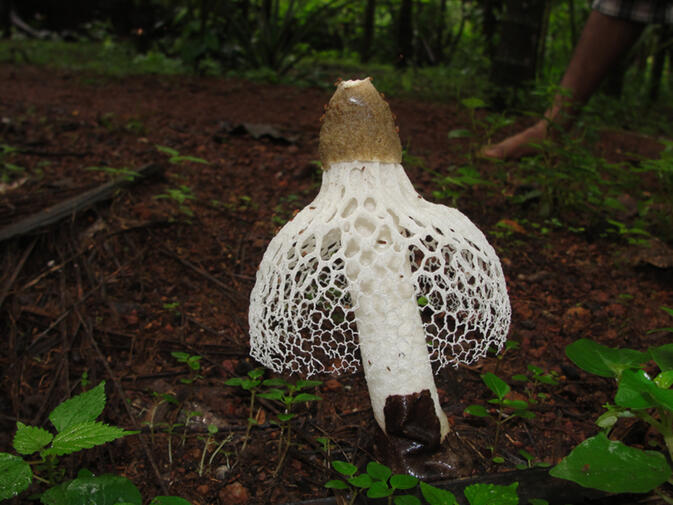 If there is any knock against Mushrooms for Trees and People, it is that the book omits Chinese characters for the species it identifies. However, this is a small, self-centered quibble that should not take away from an otherwise excellent resource. As the original Thai, Vietnamese, Lao and Burmese names for mushrooms are also not included, the editors have been consistent, most likely not wanting to bog readers down with multiple languages.

The book also has a slightly odd title, although trees are mentioned on the cover for a very important reason. While fungi may be a delicious delicacy or medicinal adjunct for humans, they are an essential component of healthy forest ecosystems — one that co-author Mortimer says may not receive enough credit:

Many fungi form symbiotic relationships with trees, providing a range of nutrients to the host trees in exchange for carbon. Many species of trees cannot survive without these fungi. Another group of fungi, the saprotrophic fungi, play the key role of decomposing woody debris and leaf litter, and in this way return organic matter and nutrients to the soils, which can then be utilized by the trees for growth. So in short, most forest ecosystems would not survive without mushrooms, and hence the link to trees in the book's title.

The research that provided the backbone for Mushrooms for Trees and People is ongoing. So far, the students and authors related to the project have collected and sequenced over 100 new species of fungi in Yunnan and other GMS areas. Costly analysis and classification work must be completed before final numbers are known, but the editors have already begun work on a second, updated version, and translations into Chinese and Thai are on the horizon.

The book can be downloaded in PDF form for free at eco-systems website Humid Tropics. Currently the download is of a low resolution and only occupies 2.9 megabytes of memory. A high resolution version will be made available soon.

Editor's note: The authors of Mushrooms for Trees and People would like to thank Humid Tropics — a CGIAR Research Program that aims to develop new opportunities for improved livelihoods in a sustainable environment — for partially funding work on the book.

The free PDF is pretty good resolution on my tablet. However, I wouldn't exactly use this as a field guide to picking your own mushrooms, but might be slightly useful a market buying guide, except as noted, no Chinese names.