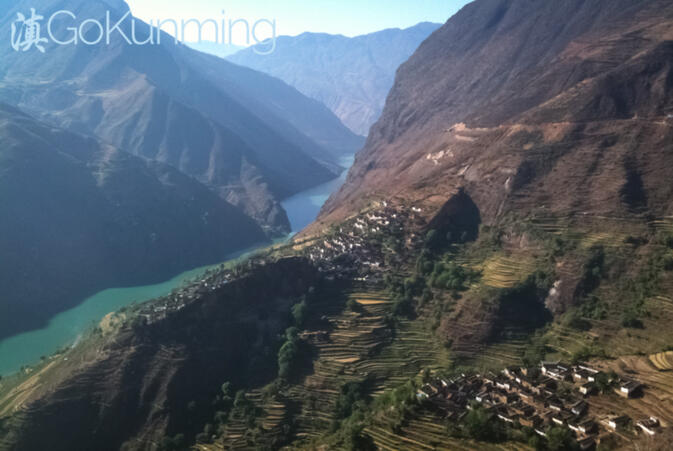 Editor's note: Adam Kritzer is a longtime Dali resident and founder of ClimbDali, a company offering guided outdoor trips and adventures in Dali and greater Yunnan. Part one of his article on hiking from Daju to Lugu Lake was published previously and can be viewed here.

Day three was easily the most rewarding of our five-day hike. From Baoshan, the trail wound up into the mountains and we ascended 1,000 meters very quickly. Despite it being springtime and us hiking at relatively low elevations, the area was hot and parched. Sweat poured off of us as we scrambled up the trail. The mountains had been picked clean of vegetation by goats in many places and the trail had eroded away almost completely, our first warning from nature that this trail was not for the faint of heart.

Ahead of us loomed a massive rock edifice whose sheer face rose 1,500 meters directly out of the Jinsha River below. It made for a stunning vista, with the lack of rainfall and the dam downstream having curtailed its flow and given it a bright aquamarine hue. While the view was fantastic, Yang Xiao and I couldn't see a path around the cliff, and we began to grow increasingly nervous that perhaps we were on the wrong trail. 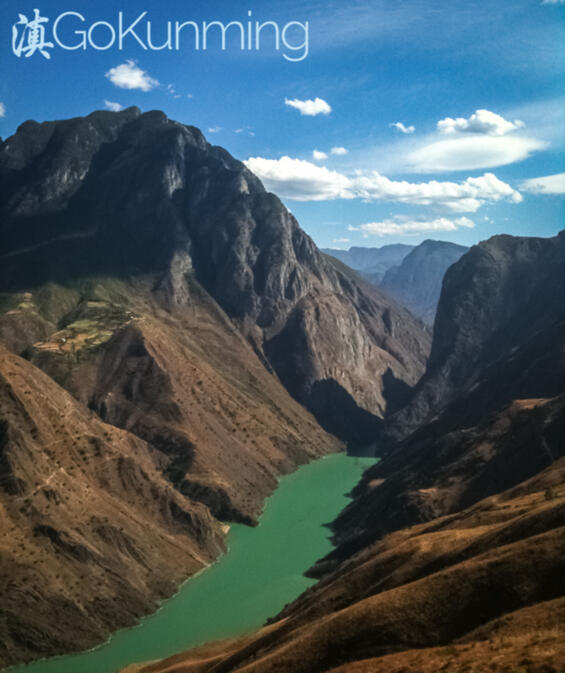 Upon reaching the face of the cliff itself, we were shocked to discover a tunnel, which had been bored directly through the mountain and was around 100 meters in length. The tunnel provided a welcome break from the scorching sun and a chance to catch our breath after the exhausting climb we had just completed. We passed through another, smaller tunnel near the top of the mountain, and began our descent.

Stopping at the next village we encountered, we took a short break and filled up our nearly empty water bottles. We still had around 15 kilometers left until Fengke (奉科), our destination for the day. From the village, the trail wound back up the forested slopes before connecting with a dirt road from the opposite direction. We weren't excited about following another road, but this one didn't have any traffic. Besides, the alternative would surely involve a long, uncertain detour and a lot of extra walking. 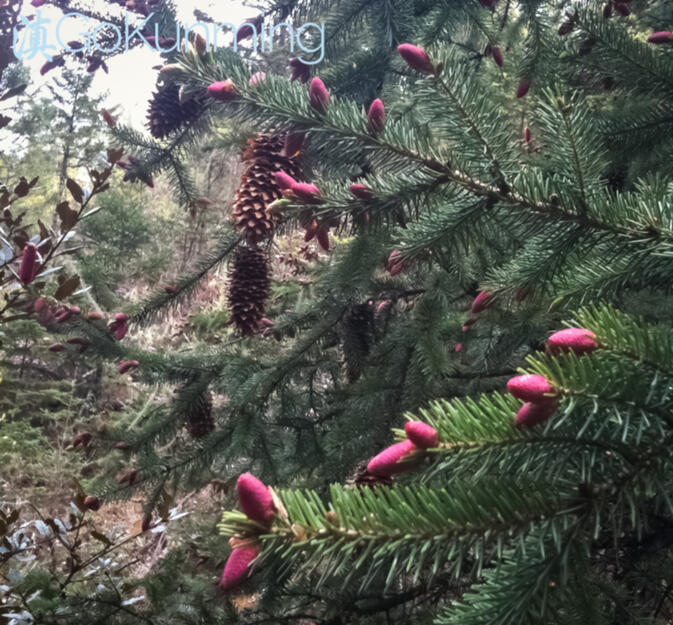 We arrived in Fengke exhausted, and as we hadn't passed any suitable campsites, we decided to spend the night in Kublai Guesthouse (忽必烈客栈). It was named, of course, after Kublai Khan, who had crossed the Jinsha River here with his troops in town by inflating cowhides and paddling them across. We learned that the pass we had crossed earlier — Prince Pass (太子关) — was also named in his honor. In fact, the path we had followed was very likely the same one the Mongols had used hundreds of years ago.

The next morning, we made a beeline down to the river and took a short boat ride to the opposite shore. Our boatman informed us that the river was now much higher, as the valley had been flooded in 2012 to create a reservoir for a dam downstream. He also complained that most of the fish had died and that the water was obviously no longer suitable for drinking. Further along our way, we passed under a massive concrete bridge that was under construction. Given the apparent lack of fish at the time and the fact that the bridge was completed soon after, the boats of Fengke have probably already been reduced to historical relics. 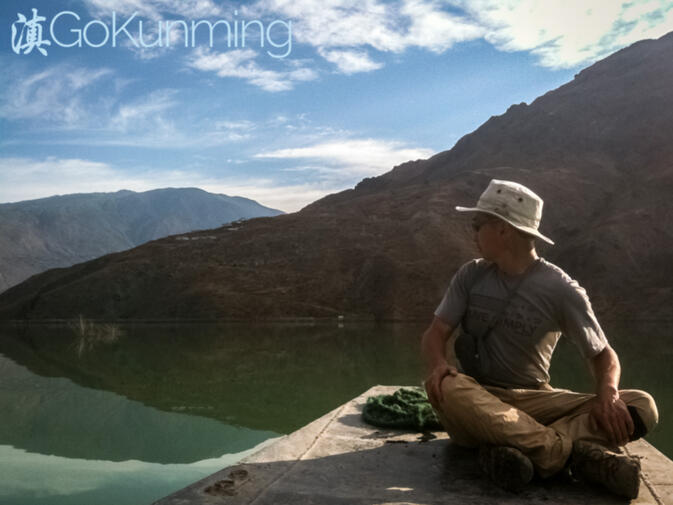 Upon our arrival in Ninglang County (宁蒗县), we stocked up at a tiny shop before beginning our third and final ascent of the week. We were uncertain as to whether we should stick to the north or south side of the tributary, which had cleaved the mountain on the east side of the river into two distinct halves. In order to avoid having to follow the road — a theme on this hike — we opted for the south side, which would at the very least be more interesting.

The beginning of the trail was well-trodden with gentle switchbacks. After about five kilometers, however, the terrain changed dramatically — a nasty combination of drought and overgrazing by goats had long since turned this part of the mountain into a quasi-desert. Without vegetation to hold the soil, chunks of the mountain had literally collapsed into the stream below. 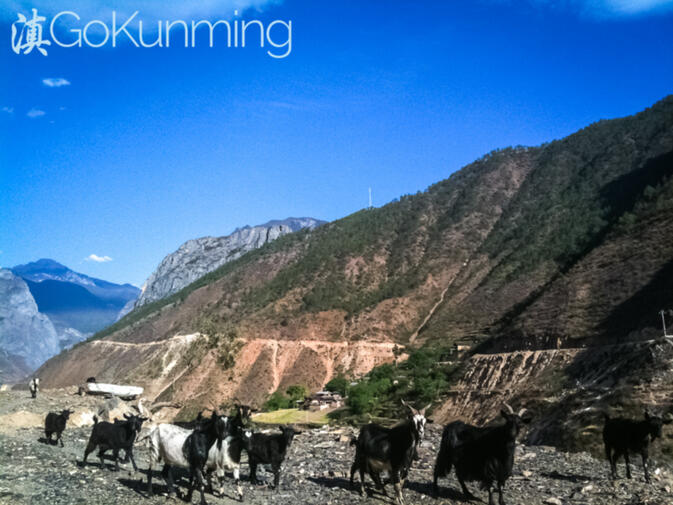 My pulse quickened as I realized the implications for our route. Sure enough, there were nearly a dozen sections of the trail which had completely fallen away and which required delicate tip-toeing to cross safely. Yang Xiao handled these sections adroitly, but I shook with fear when it came time for me to follow.

In the late afternoon, we reached a small village that had recently been connected to the wider world by dirt road. I breathed a sigh of relief as it meant the worst was behind us. This village and the one that followed were inhabited by Lisu residents. Over time they have developed a unique method of building houses, each of which consisted of perhaps 100 thick logs stacked horizontally, which interlocked at the corners. They resembled the Lincoln Log houses my brothers and I used to play with when we were young and were visually quite striking. 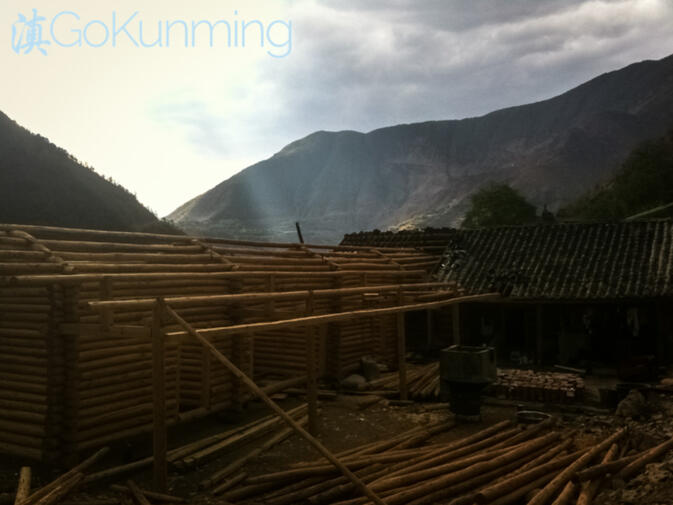 While I was glad to see these villages foregoing the concrete and rebar that have become all too common in Yunnan, I nonetheless wondered about the impact on the surrounding forest. Alas, I didn't have much time to mull over my thoughts, as we were hoping to cover more ground before setting up camp. We persevered until the next village, and given that dusk had already set in, we made a quick decision to set up our tents at the first suitable place we saw.

As luck would have it, this happened to be the entrance to a Buddhist temple built in the Tibetan style. It seemed to us that the Lisu in this area had long ago been adopted Tibetan Buddhism. The site we chose was flat, there was a toilet nearby, and it overlooked the valley below. All things considered, it was a pretty good camp. 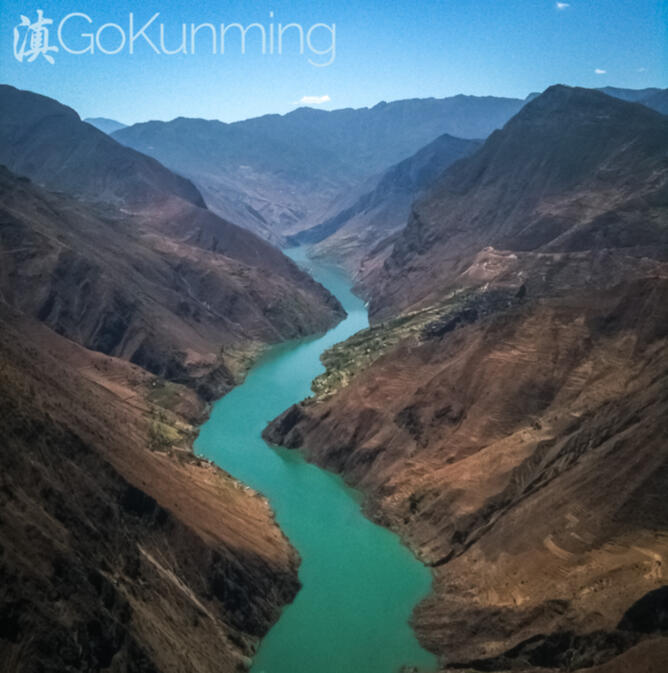 We were a bit embarrassed when the next morning the local lama and caretaker of the temple had to tip-toe around us to get into the temple. He was very friendly, and even gave us a quick tour of the temple, before we hastily packed up our belongings and hit the road. I figured that we were getting pretty close to Lugu Lake, and we could make it there by nightfall with a full day of hiking.

Besides, this was our fifth day of hiking with full backpacks, and it seemed like Yang Xiao and I were both in need of some good rest. The only problem was that we were now on a dirt road and hadn't a clue as to how to rejoin the original trail. We stopped at the next village and received some vague directions about following a stream up the mountain to a pass. After more than an hour following what seemed like the right way, we had to concede that we were officially lost. 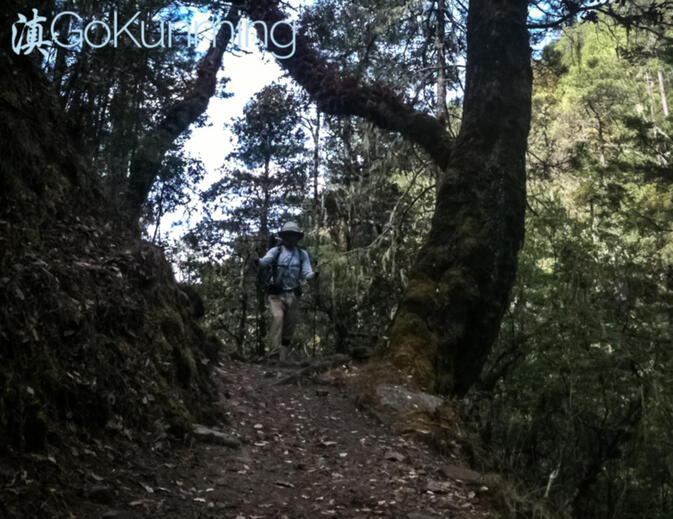 We tore blindly into the forest, and through sheer dumb luck, managed to find the original caravan trail. It wound up and up into the mountains. and after another three hours, we were still climbing. Finally, we topped out at 3,800 meters in a pasture filled with cows and sheep. We stopped for lunch and a well-deserved rest, and then began the final descent.

In the early afternoon, we closed in on Yangping Village, which from a distance was quite picturesque. It consists of around 100 dwellings built in the same log-cabin style we had seen earlier. We passed a group of traditionally clad Yi women, who insisted on walking behind us, for fear that we would try to take clandestine photos of them.

When Yang Xiao took out his camera, they requested five yuan for a photograph, which we both agreed would send the wrong message and set a bad precedent for future hikers. This situation made for an awkward hike down to the village, as each time we stopped, they insisted on stopping and resting a safe distance behind us. 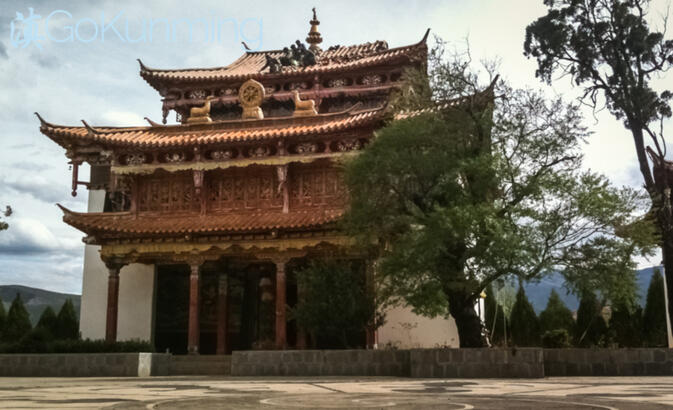 The forests around the village were in terrible shape, and the village itself was strewn with garbage, which was really a pity. Another five kilometers along a dirt road brought us into the Yongping valley, and a short tuk-tuk ride saw us into the town of Yongping itself. It was still relatively early, so we gave the tuk-tuk driver a little extra cash to take us over to the Lamasary for which Yongping is famous.

When we arrived, a new temple was in the final stage of construction, as the original one was condemned by the government after an earthquake shook the region in 2012.

After a hasty snack, we headed to the bus station where two drivers literally fought over the right to take us back to Ninglang. Finally, one driver prevailed, and we were off.

Lugu Lake was only eight kilometers down the road, and Yang Xiao got off the van for a couple of additional days of light hiking and camping around the lake. Incidentally, as virtually zero tourists approach the lake on foot from this direction, the government has neglected to build a ticket office here, which saved us another 100 yuan. The first phase of a new road linking Lijiang with Lugu Lake has already been finished, and I arrived in Ninglang in little more than an hour — a trip that previously had take four hours. In another three hours, I was back in Lijiang, already contemplating our next hiking expedition.

Interesting article .. would have been greatly improved by a map.

A few things have changed since this article was researched.

The bridge over the Yangtze at Fengke is now open. And the main road from Ninglang to Lijiang is closed from 2014 until at least 2016. All traffic from Lijiang to Lugu Lake now passes along the new road through Fengke.

I was in this same region by bicycle a few weeks ago, following the new road, but criss-crossing with Adam and Yang Xiao's trail at times. You can read about my experience here:

Great article! I live and work in Lijiang and thinking of trying to replicate this trip this coming summer. It'll probably be rainy but that's the time I have off from work.

Any chance of doing this trail without risking one's life on the eroded parts of the trail? Yes, a map of this hike (and 'death hiking' portions) would be quite interesting and useful! Geogramatt?? Sounds right up your alley!

Adam, any chance of getting some more information on this part of the trail and the other parts? A map would be great! Thanks.