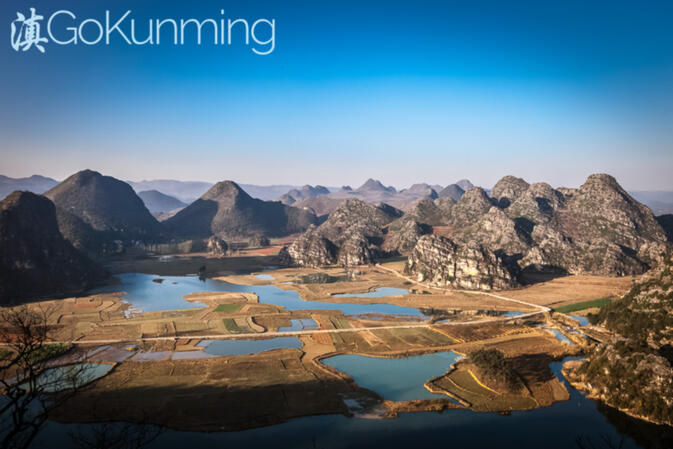 One of the more breathtaking views of Puzhehei, from atop Qinglong Mountain

On a recent trip to we had an opportunity to take a few days off and explore the Karst landscape of southeastern Yunnan. We ended up in Puzhehei (普者黑), a scenic locale known for its 300 conical mountains ringed by dozens of placid lakes. The word Puzhehei is a Chinese transliteration of the Yi minority name for the area, It translates roughly to 'pools filled with fish and shrimp', an apt title. We vowed to get up in the morning and take full advantage of our short time there. 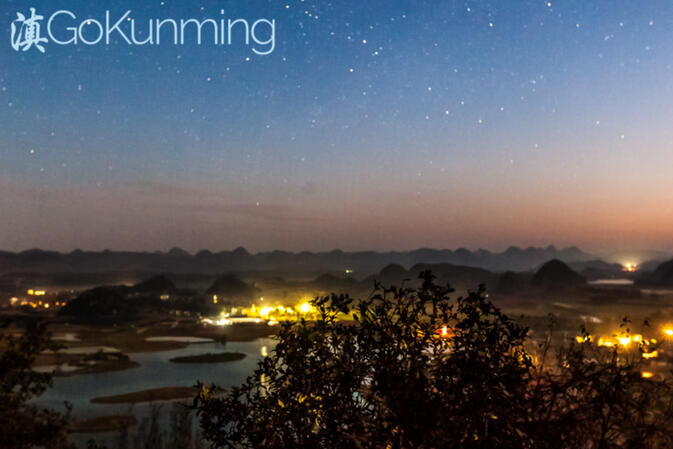 Up in darkness, we took a horse cart from Puzhehei Village to the foot of Qinglong Mountain (青龙山). After a forty minute hike, we arrived at the top just as dawn broke and watched as starlight was slowly replaced by day. 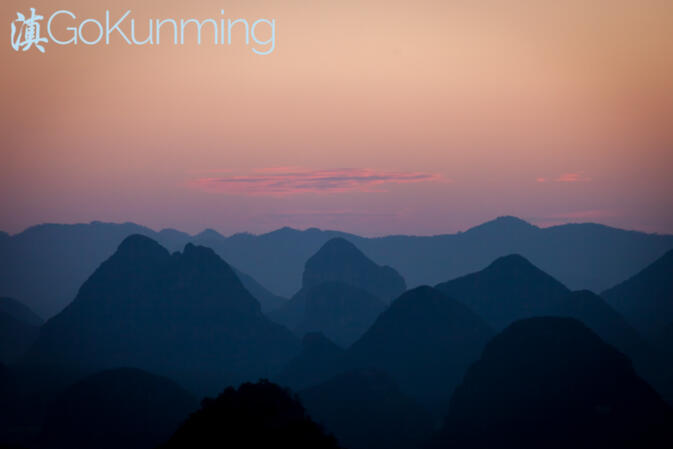 Sunrise turned the valley below us varying shades of pink and purple. We were fortunate to have come on a day almost entirely free of clouds or fog and the views across the basin were unobscured. 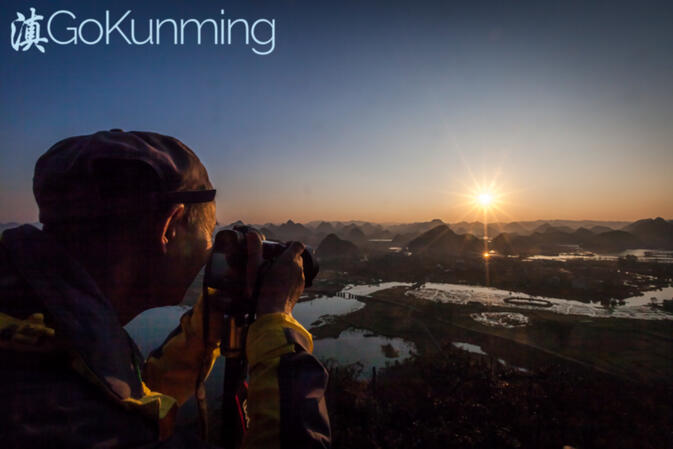 The summit of the mountain was a bit crowded and we shared the space with five people and their guide. The tour operator was a bit surprised to see us, claiming that only he and his boss knew of the vantage point where we sat. 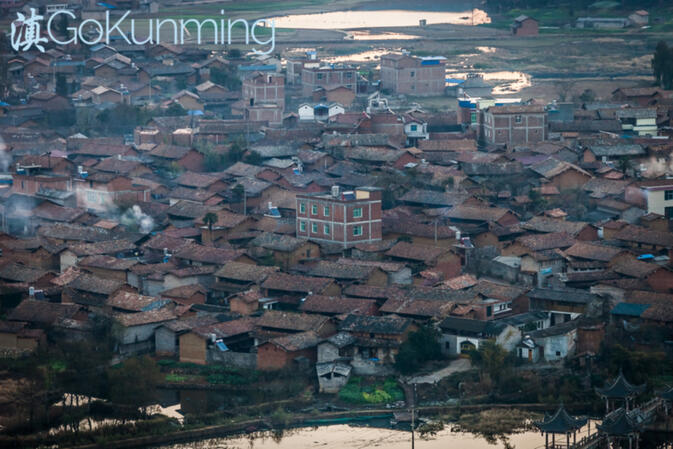 The village below began to wake up. From our perch we could hear dogs barking and chickens squawking all around the valley. Smoke began to rise from kitchen chimneys, reminding us we hadn't eaten breakfast. 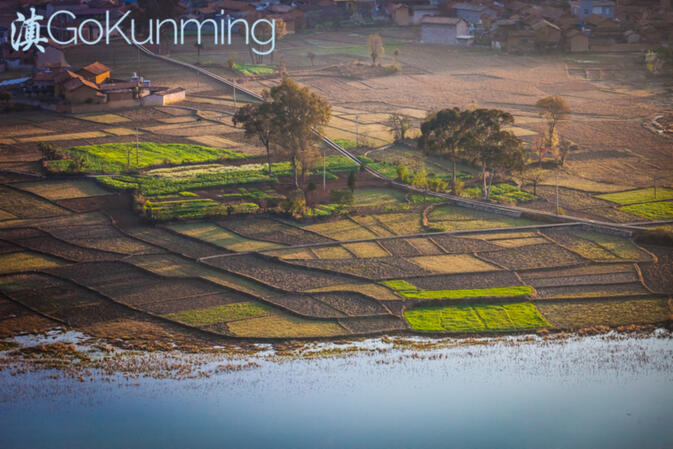 We bid our fellow tourists goodbye and began to head back toward town. Making our way back down the hill was much easier than coming up in complete darkness and we paused now and then when good photo opportunities presented themselves. 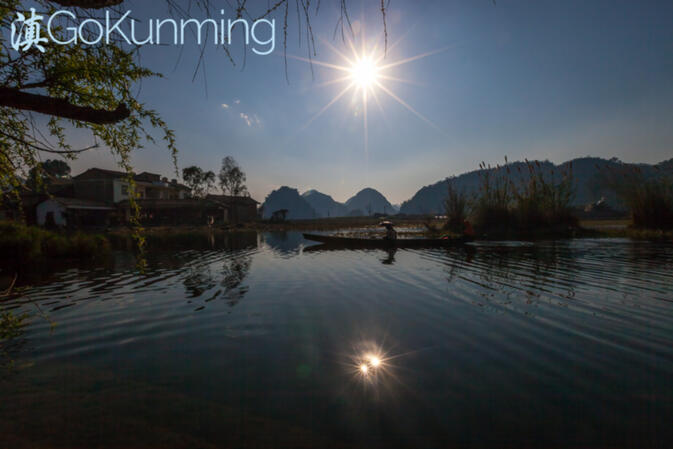 After a quick breakfast we wondered around the lakeshore. Locals were up and busy as well, some of them already out in their boats catching fish. 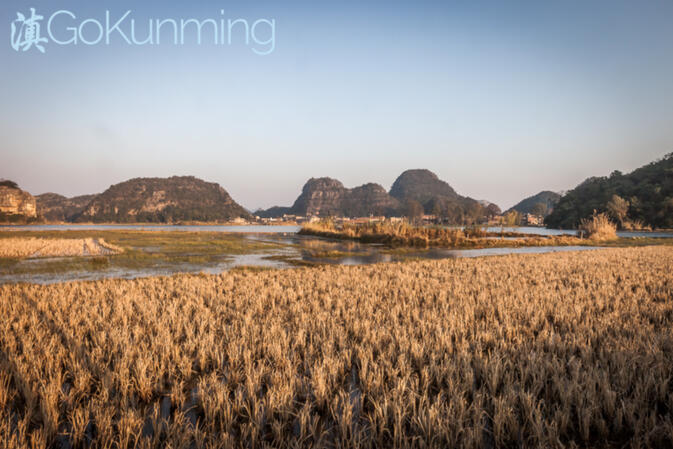 Puzhehei is perhaps best known for its lakes and their multitudes of fish, but agriculture is an important part of life as well. We stopped for a moment to admire the way the light played off the water and mountains. 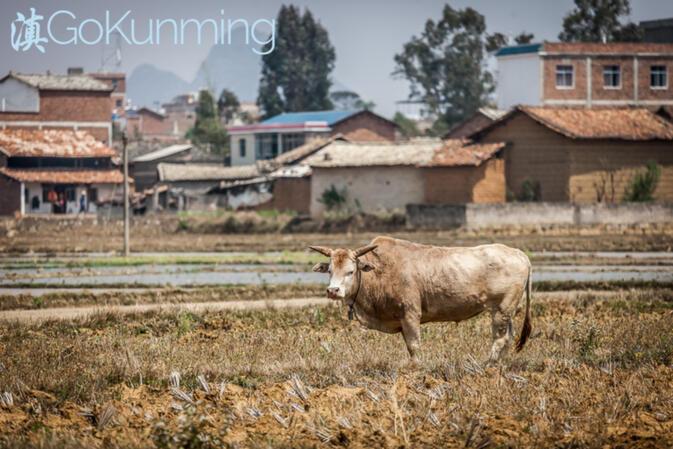 A passing horse cart offered us a lift from Qinglong Mountain back to Puzhehei Village. It was a slightly uncomfortable and bumpy 15-minute ride. Along the way we had a stare-down with a particularly surly looking bull. 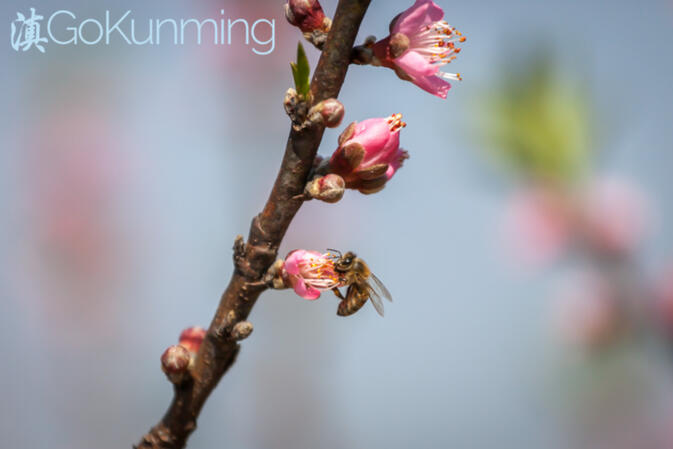 Next we decided to walk from Puzhehei Village to Xianren Dong Village (仙人洞村), which ended up taking 40 minutes. Our path took us through clusters of houses surrounded by orchards and paddies. Some of the trees were just beginning to bud, while others were in full bloom. Xianren Dong Village is a gathering place for tourists wanting to get out on the water. The most common form of transport are metal boats built for groups of three or four that are poled around the lakes by locals. 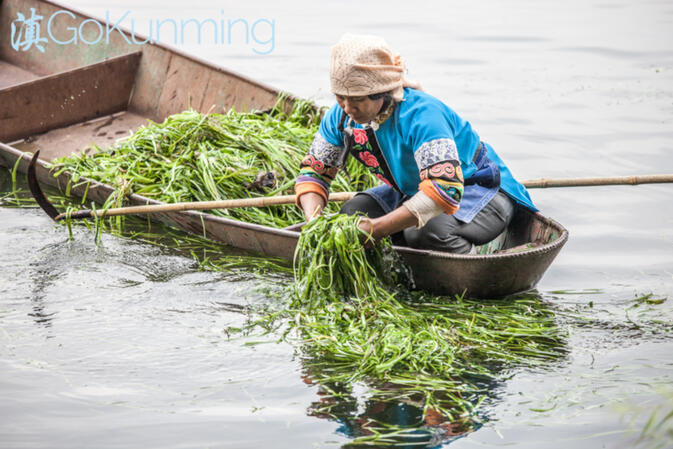 It is, of course, not only tourists who ply the lakes and waterways in Puzhehei. Locals are known for fishing and a voracious appetite for all things that swim, but they also cultivate aquatic plants to supplement their diet. 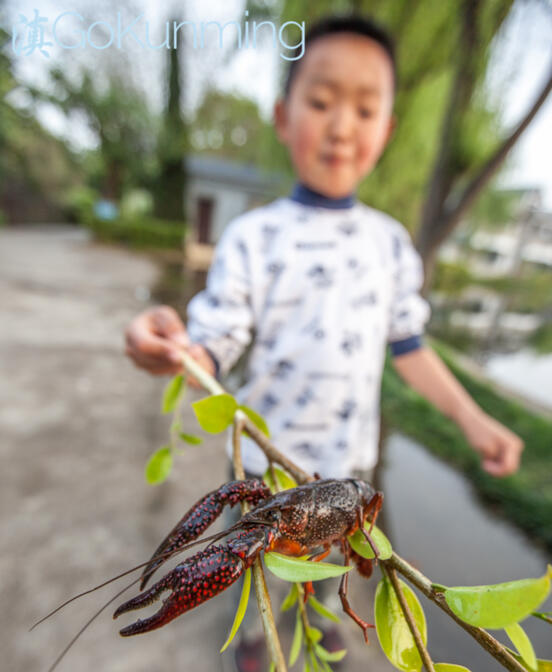 Crayfish are plentiful and eaten by locals in a variety of ways — boiled, barbecued, fried and in soups. This young man was pretty sure they could also be eaten raw, although he wasn't willing to try himself. Hotels in the area run the gamut from run-down hovels to slightly swank bungalows. Some command panoramic views of the surrounding landscape, while others offer peaceful views from the lakeshore. 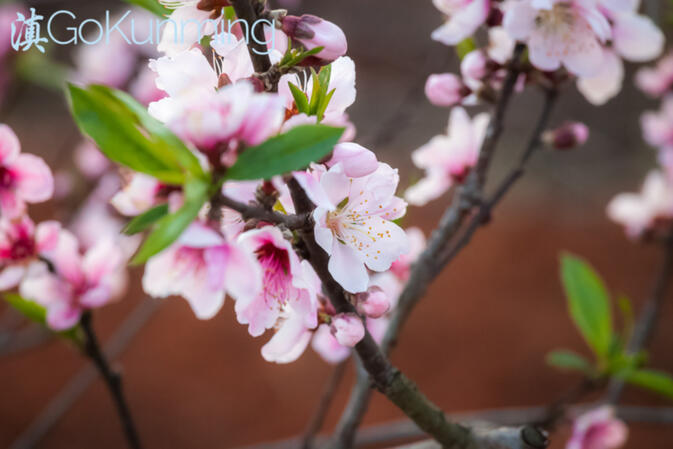 We began to retrace our steps back to Puzhehei Village, wanting to attend a home-cooked dinner we had been invited to by the owner of our guesthouse. Dinner was fantastic and not surprisingly featured a lot of fish. The meal, which was attended by 60 or 70 people, was prepared by a single family and eaten outdoors in a quiet alley. Such gatherings, we learned, are a neighborhood tradition and households rotate the cooking responsibilities from week to week. The sun began to set while we were eating, creating yet another wonderful view of the valley. We sat back and relaxed, tired and content after a busy day. We traveled to Puzhehei from Kunming by plane, wanting to save a little time. As it turns out, this strategy is not a good one. There are twice-daily flights from Kunming to Wenshan Puzhehei Airport (文山普者黑机场) and tickets are usually fairly inexpensive. However, the airport is nowhere near the Puzhehei scenic area. To get there, we caught a 120 yuan taxi from the airport to Wenshan. Once in town, we boarded a bus to Qiubei (丘北), which set us back another 40 yuan. From Qiubei we then had to catch a public bus which stopped in both Xianren Dong and Puzhehei villages. This cost us a whopping two yuan. We highly recommend eschewing flights entirely and instead taking a bus from Kunming's East Bus Station to Qiubei. The trip takes roughly five hours depending on traffic conditions and single tickets cost between 120 and 145 yuan. From the Qiubei bus station, tourist buses depart for Phuzhehei between 7am and 4:30pm. This leg of the journey should take no more than 40 minutes and tickets are two yuan. Very very nice article. Would love to go there. Can you recommend an accomodation? And what do you reckon about how much time to spend there, roughly?

Looks like a beautiful place. Will definitely be checking it out in the future.

The prettiest time of year to visit Puzhehei is June, when the lotus in the ponds bloom with pink and white flowers. Bear in mind, this is also the season when Puzhehei is flooded with Chinese tourists and room rates skyrocket. However, you can always stay in a hotel in Qiubei city, which don't go up during lotus flower season.

In just a few years, it will be possible to take the new Kunming-Guangzhou high speed train direct to Puzhehei, which will have its own station.

Beautiful! Man do I wanna go there now...

@Sarah1988: It appears Geogramatt has already answered your question. My room in Puzhehei Village was very basic and 120 yuan a day, including three meals. You can spend several days there if you enjoy exploring the area, other than just visiting the regular tourist destinations.

We went to Puzhehei first week of May and stayed in a hotel in a village nearby. I think the name was Double Dragon Bridge Village or something. The owner was very nice and helpful. We paid 80 yuan per day including two meals. The scenery in Double Dragon Bridge Village is beautiful and the place is calm. The water is crystal clear and you can see the farmers working in their rice paddies.
BUT: the entrance ticket for Puzhehei costs 200yuan (boat ride + 4caves). They offer 4or5 different routes. On the boat you can 'enjoy' water splashing. Well, they have buckets. So make sure you dont take anything with you on board that cant take buckets of water as the Chinese tourists there are just lusting for entertainment and dont care whether you have cameras with you or not.

Puzhehei itself, which consists of mainly hotels and shops, is very touristy and gives you some kind of Disneyland impression. The hotels there are very expensive as well as the food and anything else you would like to buy eg. mosquito repellent. For entertainment you can go to KTV, a fire show (40kuai) or be inside those big plastic balls on one of the lakes with very loud music. There are lots of minorities living around the lakes, but none of them wears their traditional clothes as the hotel owner told us. I didnt see anyone either. In one part of Puzhehei there is a fake little minorty village though. Renting a bycicle costs 25 yuan per hour. You can hire a horse cart for 80kuai per hour. There is a little plum farm between Puzhehei and the village we stayed in. You can pick plums there. But you need a bycicle or something else to get there. In beginning of May there were already

a lot of coaches arriving trying to make it's way through the crowds of tourists.

SO, my conclusion: If you are looking for a peaceful, calm, laid back village, where you can also see some minorities... Dont go there. Spending so much time on transport isnt worth the place at all.

I have been to PZH 6 times over the last 11 years. I visited one time in August and the remaining 5 times were in November and December. Yes, there is a big difference here during these months. The 5 times I went in November and December, I was literally the only person on the boat and I had the entire lake to myself. June to August (Peak) are the worst months to visit. Also, I never buy the ticekts because the price is ridiculous. I have seen the ticket prices increase from 50, to 60, to 100, and finally to 200 Yuan over the years. I really dont think the boat ride is worth 200 Yuan.

If you look for authentic scenery, take the north road to Guangnan or take the old road direction Xingyi, beautiful villages with karst mountains as an backdrop. Puzhehei is an complete waist of time and money. Except for the one who likes this kind of mass tourism including the music, the screaming and shouting, maybe for young kids it is great fun, but for nature lovers it must be an nightmare

Has anyone been to Puzhehei recently and can comment on what the accommodations and surrounding area is like now? And how it would compare to somewhere like Anshun? I'm looking to take the high speed train somewhere within 2 hours and those two places seem to be the best choice for a little getaway.