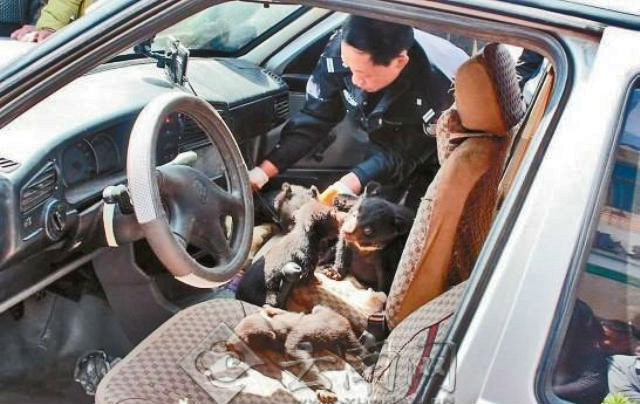 A man pulled over during a traffic stop in northeast Yunnan has been accused of illegally trafficking nationally protected animals. Police searching the car reported they discovered nearly two dozen black bear cubs, most of them uncaged and wandering around, in the vehicle.

The driver was on a stretch of the G85 Expressway heading north from Kunming when he was stopped at a traffic checkpoint. During an inspection of the unidentified man's vehicle, officers from the Lüdian County (鲁甸县) Public Security Bureau found 24 animals roaming free inside the sedan.

When initially questioned about the animals, the driver maintained they were puppies. Upon closer inspection, police officers noticed most of the 'puppies' bore a unique white patch of fur on their chests. It was then they realized the beasts were actually Asian black bears — commonly referred to as moon bears. Under further questioning from officers, the man admitted he was transporting the bear cubs from Mohan (磨憨) in southern Yunnan to Sichuan's capital, Chengdu.

The cubs, many of which were undernourished, were rounded up and fed milk by local policemen. After arresting the suspect, a further search of the car turned up the body of a dead adult black bear, four additional ursine paws and a case of powdered milk. Investigators remain unsure if the bears were raised in captivity or captured in the wild.

The cubs have subsequently been transported to an unnamed animal rescue shelter. The driver, meanwhile, has been jailed and charged with illegally transporting endangered wildlife. He is being held in a Zhaotong Prefecture jail pending trial.

Despite aggressive anti-poaching campaigns meant to discourage trade in endangered wildlife, Yunnan remains a hotspot for such activity. Laos and Vietnam were singled out as two of the three worst countries regarding illegal animal trafficking in a 2012 World Wildlife Fund report. Many of the animals poached in the two countries end up Yunnan, before being smuggled to other provinces in China.

Black bears such as the cubs being transported through Zhaotong are listed on China's list of 'nationally protected species'. Due to anti-poaching efforts it appears Asian black bear populations may be on the rise, although the increase has had the adverse effect of increased bear attacks in parts of the province.

The bear bile farms set up to detract species taken from the wild doesn't work. Deterrence efforts between bear 'attacks` and people need to happen in addition to shutting down the horrific farms.