January 15, 2021 "We are looking for a part-time English teacher. Requirements: - Have experience in teaching 3-15 years old children; - Have ability to prepare y …"
Study NicolasGongCha 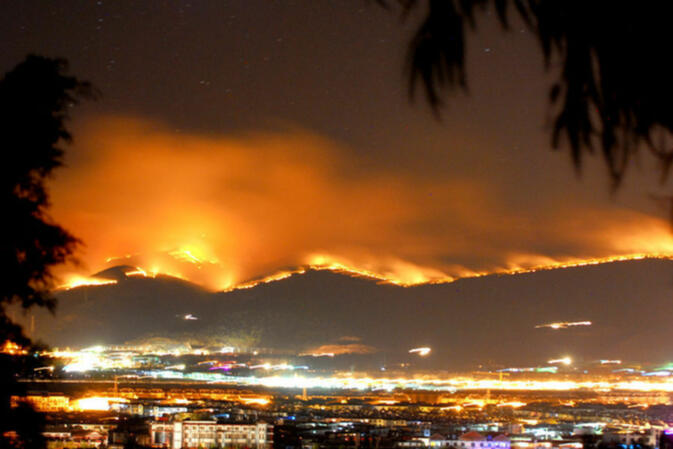 The Yunnan Forestry Department has announced the province has reached the apex of its annual dry season and is taking preemptive steps to prevent fires. Conditions this year, even more so than in years past, are ripe for wildfires, according to an official statement.

Although much of Yunnan had been mired in drought for half a decade, the 2013 rainy season saw considerably more precipitation than the previous several years. Reservoirs returned to historical levels following intense summer rains and in the autumn, officials appeared hopeful water levels would be adequate to see cities through the winter.

One aftereffect of the summer rains was a considerable build-up of quick-growing underbrush in forests and on mountainsides. Winter ice and snowstorms killed many of those plants and officials are now concerned a month of dry weather has created a severe overload of easily combustible materials in wooded areas.

Since the dry season began in mid-December, 23 forest fires have been reported in Yunnan, many during the Spring Festival holiday when people set off enormous amounts of fireworks. The largest of these fires burned 200 acres of woodland near Baoshan in January.

Much of the province is currently under a "fire danger rating" of four on a scale of one through five, meaning conditions for wildfires are classified as extremely high. Lijiang is thought to be the most in danger and has earned the scale's highest rank.

Forestry officials have called for people to forego setting off fireworks and to avoid lighting incense in mountainside graveyards. Authorities are also urging smokers to be judicious in their disposal of cigarette butts, especially in rural areas. Thousands of workers have been deployed to scenic areas to remind tourists of the fire danger and fire outlook posts are in the process of being built in the province's more forested areas.

Although not mentioned in the Forestry Department missive, nature enthusiasts may be hampered in their outdoor activities for the foreseeable future. In previous times during a high chance for wildfire, hiking and mountain biking trails were closed off entirely, sometimes for months at a time.

Let's hope that today's rain is enough to reduce or eliminate the risk.