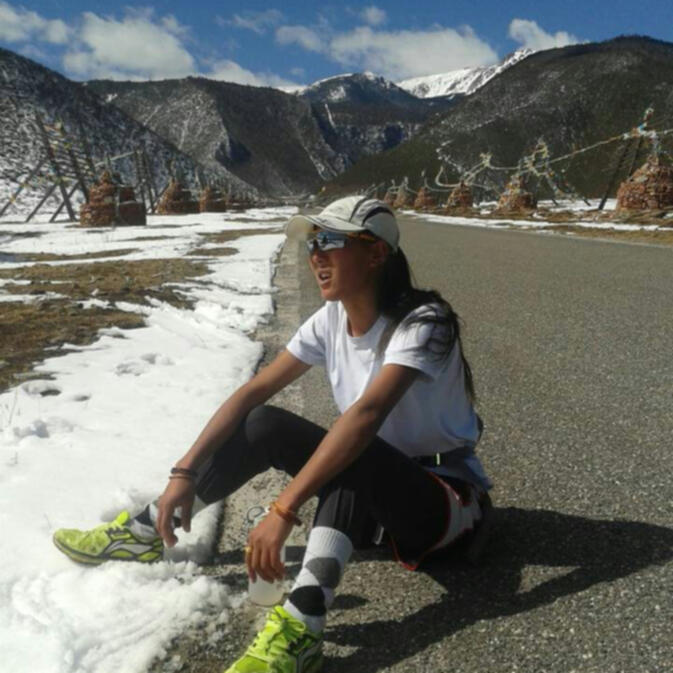 Editor's note: Author Pavel Toropov is from Wimbledon, London. He is an elite semi-professional long-distance runner, specializing in trail races ranging between 50 and 100 kilometers. Toropov is currently based in Shangri-la, training full-time at altitude for the upcoming trail and adventure race season in Asia. He will be keeping us abreast of the adventure sports scene in Yunnan and China throughout 2014.

Some people are simply natural born runners. Without training they can run times that most serious amateurs would be proud of. Abdi Abdirahman, a great American distance runner, ran a 15-minute five-kilometers the first time he entered a race as a high school student — with no training. Recently, I met a female Tibetan version of Abdirahman, a young nomad from Golok, a remote prefecture of southeast Qinghai province, famous for its tough warrior folk. 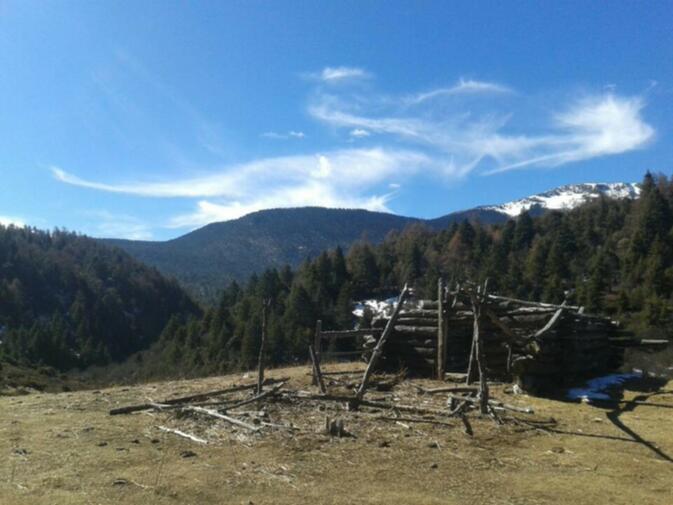 View from the training ground outside of Shangri-la

Yishi Drolma was born and grew up a nomad, looking after the family's 400 yaks on remote mountain slopes. The altitude was over 4,000 meters. Enormous Tibetan mastiffs kept the wolves away and snow leopards prowled the high passes above the pastures. Her mother passed away early and Drolma had to take her place and help raise four siblings. Life was tough, unforgiving and sometimes violent.

Drolma did not speak any Chinese, only the local dialect of Tibetan, but wanted to see the world, glimpses of which she saw on television and in the magazines that sometimes came her way. When she was 13 years-old she managed to get her hands on 300 yuan and ran away to Chengdu, where she knew only one person.

When she was 19, Drolma ran away again, knowing that her father would never give her permission to go. She came to Shangri-la in Yunnan where she got a job singing Tibetan songs at a gaudy folk performance center aimed at Chinese tourists. The place also provided her room and board. I saw the room where she lived — cramped, drafty, freezing and shared with two other Tibetan girls and two puppies. At least she had her own bed. The other two girls were sharing the same tattered mattress. 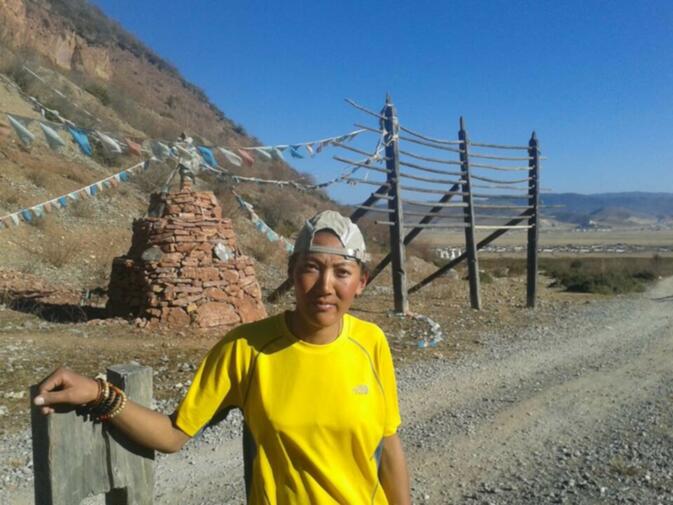 People from Golok are renowned for their toughness and fighting spirit, as well as for their deep Buddhist beliefs, and Drolma is no exception. Once, in Shangri-la, she confronted a lama, who, dressed in his robes, was sitting in a bar watching the girls, drinking and smoking. Drolma tore into him, admonishing him for disrespecting Buddhism, and setting a bad example for Tibetans.

In addition to singing, during the summer Drolma also takes Chinese tourists hiking, charging a pittance for her services as a guide, porter and organizer. She told me that it didn't feel right to charge people for enjoying the natural world. This attitude is extremely rare now, as everyone seems to be ruthlessly trying to cash in on the tourist boom in the area.

I met Drolma through a friend when I was looking for a Tibetan teacher, and she soon asked me to take her running. Wearing my old running tights, a t-shirt several sizes too big, my running shorts and a pair of basic shoes, she simply took off, bouncing, jumping and singing as she ran. We ran ten kilometers that first day at a very respectable pace for 3,300 meters of altitude. She she could have kept going, and that is when Project Y was born. 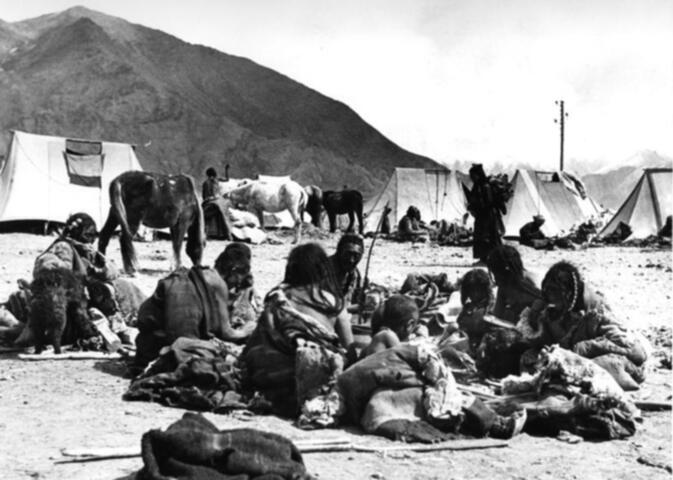 I soon suggested to Drolma that if she trained and trained hard, she could win trail races in China and could even support herself with the prize money, as she was earning very little as a singer. My local Tibetan friends, who saw us running on the roads and trails around Shangri-la, took to the idea wholeheartedly as they only have one high-profile athlete, a speed walker who won a medal at the London Olympics.

The thought that a nomad girl from Golok could compete and win, and in a sport which meant running through the mountains — which Tibetans love — impressed and moved them. Older Tibetans would tell her to train as hard as she could in order to show the world what their minzu, or ethnic group, was capable of and not let slip the opportunity that came her way.

They thanked me ceremoniously and profusely for becoming her coach. This made me feel both very honored and more than a little embarrassed by the attention. The following is a short interview between the two of us, covering a bit of her past and how she feels about running now.

GoKunming: Where exactly are you from?

Yishi Drolma: I am from Qinghai province, Golok Prefecture, Jigzhil County. Our pasture was close to the sacred mountain called Nyanpo Yurtse; the highest mountains around the pasture are almost 5,400-meters high. The closest town is more than 40 kilomters away. Our pasture was very large. Seven families are using it now; our family lived between two large lakes called Upper Rak Gan Lake and Lower Rak Gan Lake. 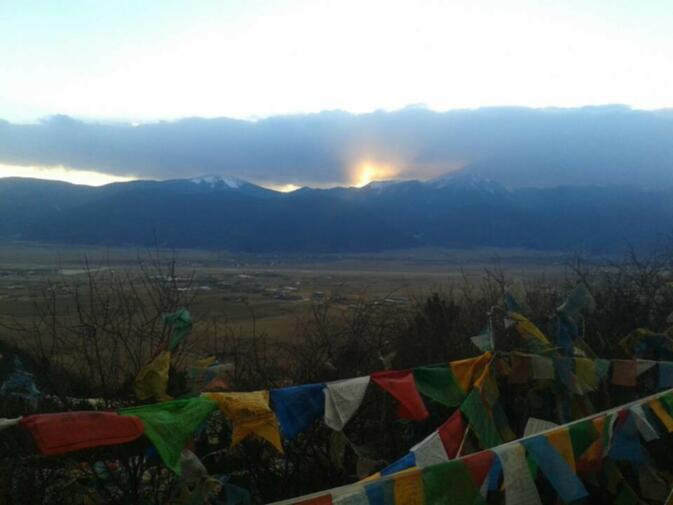 GK: When you were growing up in the mountains, what was your daily life like?

Drolma: Most of the time was spent looking after yaks. They had to be milked twice a day. It was a huge job, as we had almost 400 animals. In the afternoon we had to keep calves away from their mothers, to prevent them drinking all the milk. You can't have fences in the upland grasslands. My brother and I had to run and run, scaring the calves away from the cows.

Another job was collecting yak manure on the pasture which was then dried and turned into fuel. We had a lot of fun with my brother running around the pasture collecting, playing games as we went along. I miss those times. I did not have much free time, but I would make time for myself by forcing my older brother to do the chores my parents asked me to do. I was tough and he was afraid of me If he didn't do what I told him to do I would beat him up [laughs].

Once my father said that he would buy us new clothes when ours got worn out, so me and my brother got very excited and ran to the mountains where we tore up our clothes using rocks. When our father found out what we did, he refused to buy us new clothes, so we had to wear the ones we tore up for a long time. 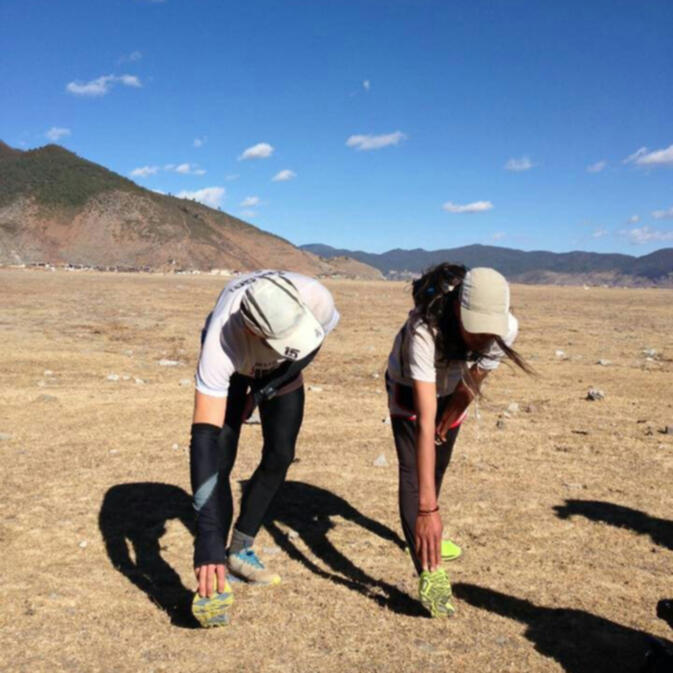 GK: Why did you leave the pasture and move to the town of Jigzhil?

Drolma: After my mother passed away there was too much work for my father. It was me and four siblings, so my father decided not to make our lives that much harder than they already were and we went to live in a town.

GK: Why did you leave Jigzhil and come to Shangrila?

Drolma: I wanted to study, and my father would not let me go to school because I was the only one who could look after the house. I really like to study and I could not learn anything in Jigzhil, so I came to Shangrila where I started to learn English at a volunteer-run training school.

GK: What would your family think if they knew that you wanted to be an athlete, a runner?

Drolma: I don't really know, I actually discussed this with my father and the only thing he said was: "Can there be a future in this running, can it give you enough to live?'' I said: "I don't know yet". 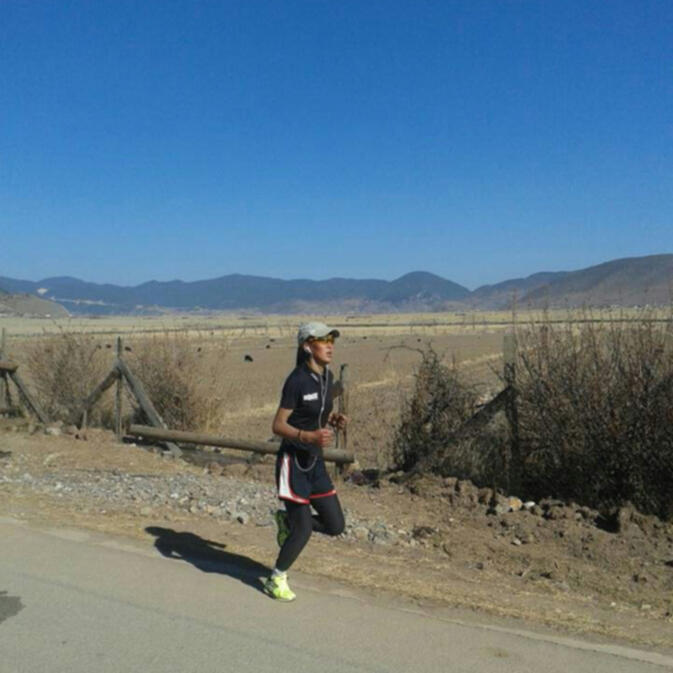 GK: Most girls here want to get married very quickly, make money, and get a house and a car. What do you want to do in the future?

Drolma: I want a house and a car too, but I don't want to get married. One reason is that I feel that I have not done much yet, have not really enjoyed my life. Also, my family relies on the money I earn as a singer; I make 1,700 yuan a month, a thousand of which I send to my family. If I get married, I won't be able to do that. I also want to travel and see new places. I have foreign friends here in Shangri-la who have been to many different places, I want to do that too.

GK: What has been the best part of trail running for you so far?

Drolma: The feeling that I have when I run in the mountains, I feel like I am flying [laughs]. Also, the day when Olya [Olya Korzh, an elite Russian trail runner based in Hong Kong], you and myself ran up to the top of Shika Snow Mountain and back down. 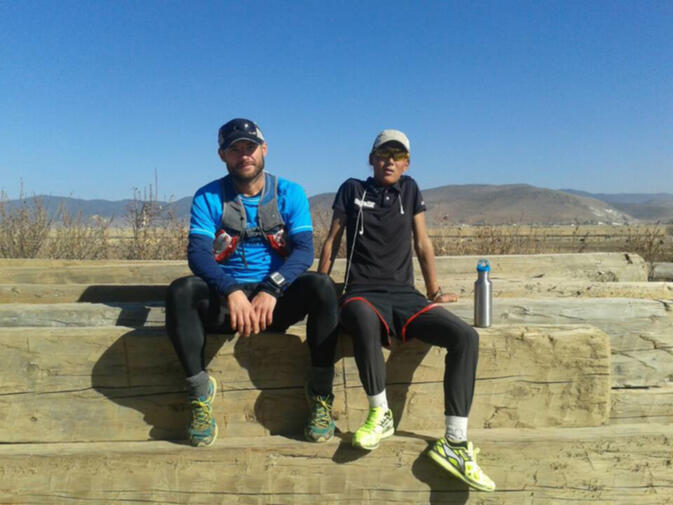 GK: Many locals see us running and know who you are now. Every Tibetan I know is excited that a fellow Tibetan can become successful at a sport and many local people are very supportive of you, especially other nomads. How does it make you feel?

Drolma: It gives me a lot of pressure. Nobody in the past, apart from my younger sister, has supported me in my plans. My father only ever cared about me getting married early, so I never told him about any ambitions I had. Now I have 40 people from my area on my WeChat who see my running pictures and are very excited. They give me a lot of support and encouragement. I am really happy and touched, but I also feel pressure.

GK: Which part of the it do you find the most demanding?

GK: You have never raced or competed before. When you think about racing, what goes through your mind? Are you scared or nervous?

Drolma: I am excited, not scared at all. I want to do this. 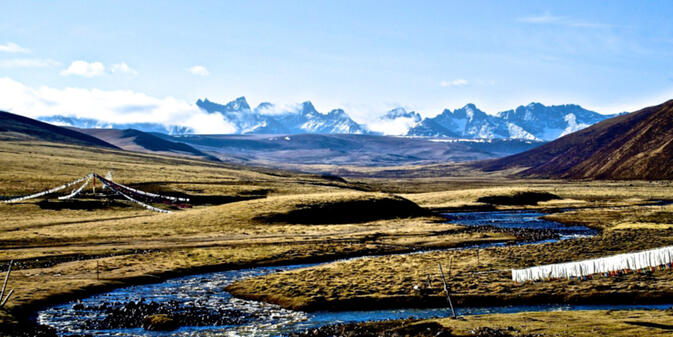 A mountain view in Golok Prefecture, where Yishi Drolma is from

Black and white image: German Federal Archives via Wikipedia
Bottom image: The Land of Snows
All other images: Pavel Toropov

Running in the mountains is great. I have a theory that up and down are the same.

Letting urself go, in wuwei, following dao, u can run pretty fast in a mountain.

But shoes do not seem a good idea.

AMAZING story. thanks for sharing!

Shangrila is a wonderland with a magical story of amazing people.

加油Yishi Drolma!!! You can do it!!!
Never stop running! For yourself! For the world!

Tashi dele losar also to Pavel ! Say hello to our karma kagyu master, Venerable Gompo Lama, if u cross him !