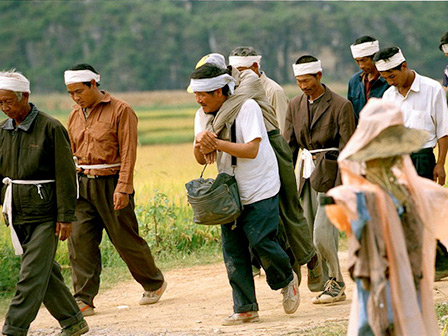 A screenshot from the 2006 film Luoye Guigen which tells the story of a man carrying the corpse of his friend home for burial.

A young man carrying a dead body was stopped by Spring City police last week as he made his way along a highway near Xishan. Law enforcement officials are now looking into whether the case involves foul play or instead is an instance of a centuries-old tradition returned to the modern day.

The man in question, whose name has not been released, was detained for a short time after police in Xishan district received several phone calls reporting suspicious behavior. During questioning, the man explained to officers that his father had passed away in Ruili and needed to be returned home to his birthplace in Hubei province nearly 2,000 kilometers away.

Unable to afford proper transportation, the son had alternately walked and ridden buses more than 600 kilometers from Ruili to Kunming. He reportedly told police riding public transportation had been made difficult due to the circumstances surrounding his father's death.

While some bus drivers were willing to transport a corpse, many of them asked how the man died. The honest answer, according to the son, was complications stemming from tuberculosis. Because of this, the man and his father were not allowed on buses and the son became discouraged, deciding to walk instead. When he was stopped, the man told police he had been walking for 23 hours.

Kunming medical examiners are now conducting an autopsy in an effort to corroborate the young man's story. He is not currently facing charges. If his account is proven to be true, Kunming police have agreed to arrange transport of the body back to Hubei.

In Chinese 'corpse walking' is referred to as ganshi (赶尸) and has reputedly been an unofficial profession for hundreds of years. Traditionally when a person passed away far from their ancestral home one option available was to hire a man to carry the corpse on his back. Today, scholars of Chinese culture argue as to whether tales of corpse walking are entirely apocryphal or contain some element of truth.

The practice has a long history in Chinese literature and was the premise for a successful 2006 movie entitled Luoye Guigen (落叶归根). In his 2009 book entitled The Corpse Walker, author Liao Yiwu (廖亦武) chronicles the lives of people living on the edges of society. The interview from which the book takes its name is with a man who claims he has been a corpse walker for much of his adult life.

Interesting. The Corpse Walker is one of my favorite books.

Amazing! The poor man...I wish I could help him return his father to his homeland.

落叶归根 is one of my favourite Chinese movies. Hilarious and touching story.

I watch "Walking Dead"... does that count?

The japanese movie "Departures" is probably the best movie I have ever seen. It is fascinating how caring for the dead can awaken noble gestures an admiration in men.