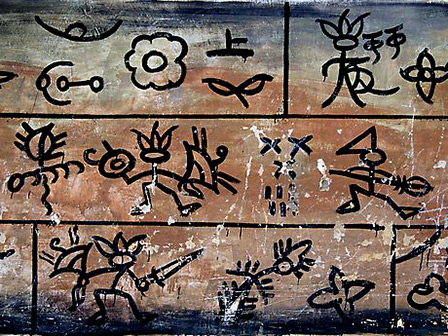 A law aimed at preserving minority culture in Yunnan has led to the creation of a facility developed solely for the recording and transcription of the province's diverse languages. The project, overseen by faculty at Yuxi Normal University, is tasked specifically with establishing archives of the most endangered of Yunnan's languages and is the first of its kind in southwest China.

Professor Bai Bibo (白碧波), who heads the effort, has said gathering records of minority languages with fewer than 500 fluent speakers has been given precedence. Yunnan is home to 25 officially recognized minorities. However, such categories often encompass smaller groups who identify themselves as culturally distinct from their designated ethnicity.

The goal of the project is to compile audio and video recordings of people speaking their native languages and then transcribing the samples into Mandarin and pinyin. Once this is accomplished, linguists working at the university translate everything into the international phonetic alphabet to make the documentation more easily accessible to linguists in other countries.

Researchers in Yuxi encourage participants to tell folk stories, riddles or sing in their native languages while they are being filmed. Linguists then collaborate with native speakers who are fluent in Mandarin to ensure translations are correct.

One of the the project's first recordings was that of the A'nong language (阿侬语). Considered part of the Tibeto-Burman language family, it is only spoken in a small area in the Nu River valley near Fugong by roughly 400 people.

Bai estimates languages such as this may only exist for one or two generations before they die out completely. As another example he cited Buxing (布兴语), which is spoken by fewer than 200 people in two villages in Mengla County. It is quickly being replaced in daily use by the more commonly spoken Dai language, as well as Mandarin.

In addition to collecting spoken records, Yuxi Normal University is cooperating with international language preservation institutes. One of the reasons behind these collaborations is to compare language samples taken recently with those collected in the past. Researches hope their analyses will help identify which languages are in the most urgent need of being recorded.

I want to learn how to write like the captioned pictures...that's pretty cool...

It does look cool and strangely contemporary. Although it looks a little bit like Fido Dido on speed.

Doesn't sound terribly scientific to me, although this description may not be accurate. These languages are often unrelated to Mandarin, so "transcribing them into Mandarin and pinyin" would be pointless if "pinyin" here is a reference to "hanyu pinyin."

The logical way to do it would be to record the original speech and render it in international phonetic alphabet (IPA) then and there, and then have the spelling finalized based on further analysis of the recording. The only role for Mandarin would be to confirm the approximate meaning of the recorded words.

I translated 《额尔古纳河右岸》(Last Quarter of the Moon) by Chi Zijian, which contains about 150 Evenki names, place names and words. In my experience, neither Chinese characters nor Hanyu Pinyin are well equipped to capture the sounds of a polysyllabic Tungusic tongue like Evenki.

I agree with szbruce - the idea of using hanyu pinyin would, however, perhaps encourage any non-mother-tongue users of the language (such as most Chinese, and non-Chinese who don't go to IPA (as most won't)) to pronounce it in a similar manner to the pronunciation of Chinese, and so in this way to move in the direction of a 'sinicization' of the languages (essentially, to make Han Chinese a sort of standard for these languages). This sounds suspiciously like a nationalist move, and perhaps that is what is intended.