Portraits from the Tea Horse Road 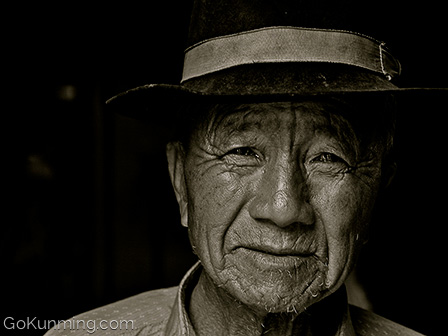 Editor's note: Jeff Fuchs has spent most of the last decade in Yunnan. He is a photographer, writer and explorer whose work has centered around indigenous mountain cultures, oral histories and his obsessive interest in tea. He was the first Westerner to travel the legendary Tea Horse Road over the Himalayas entirely on foot — a journey of more than seven months.

Fuchs is a North Face Ambassador as well as an Explorer in Residence for Kensington Tours. Most recently his short story "Hands of Stone" was published in the collection Unsavory Elements. The portraits below were taken on several different journeys Fuchs made along the Tea Horse Road.

The article's top image is of Tibetan mountain man and epic muleteer Dawa in his home in 2007 near Fushan in northwestern Yunnan. Every year I would try and visit the old trader as it was his prophetic words regarding the dangers of Sho'la Pass that saved our team during an attempt to cross a blizzard-prone mountain pass in 2006. His warning "beware of the two faces of Sho'la Pass", served us better than we could have imagined. Dawa passed away in 2011. 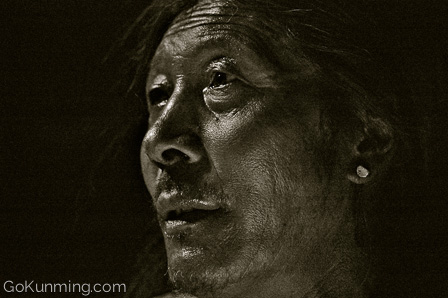 Tenzin, one in a long line of 'hosts' for Tea Horse Road caravans in eastern Tibet, inside his tent. Situated nearly six kilometers in the sky, his community has a long history of aiding the great mule caravans and muleteers in return for commodities.

In addition to providing shelter and grazing for passing traders and their livestock, his community of Ala Dhotok — or 'Stone Roof' — was traditionally a relay station for the postal route connecting Lhasa to ancient capitals further east. The portrait was taken in 2006 during a seven and a half month expedition along the Tea Horse Road. 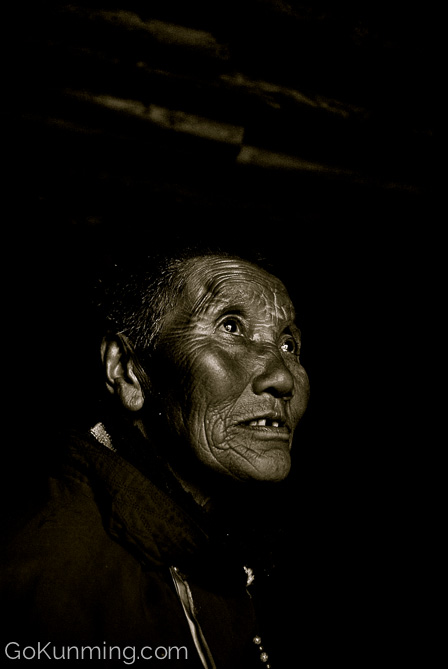 Drolma, of Litang, in western Sichuan recalls times gone by as she sits in a friend's home. Left without a family, she depends on her Tibetan community to assist her as she ages. One of her tasks is to keep watch for thieves at neighboring homes when the owners are absent. In her seventh decade she recalls when her community was still largely nomadic and depended almost solely on yaks, tea, trade and friendship. 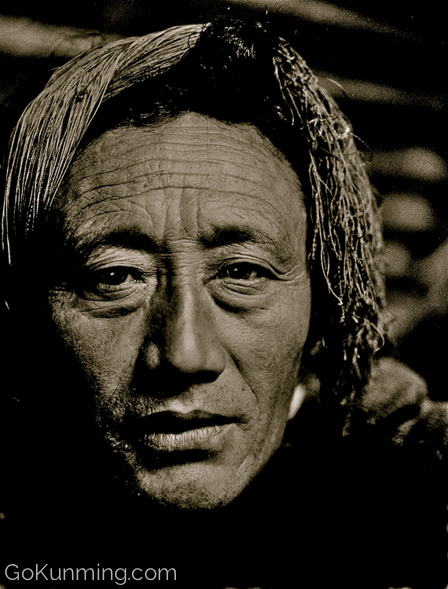 A Tibetan nomadic headman near the border of Yunnan and Sichuan. The portrait was taken in 2007 in his tent. We enjoyed an hour-long butter tea session with him while we trekked through his clan's lands. He was curious what a westerner was doing in the "land of wolves and blizzards". 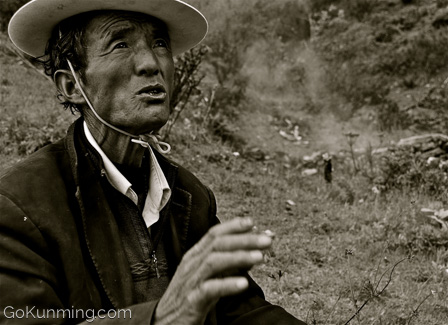 Horseman Songjè expostulating during a hike near Zhongdian, northwestern Yunnan in 2012. It is inevitably the elders such as Songjè who make the best horseman and mountain guides, as it is they who know the mountains, the weather, and can recall the former days of trade. Once they get started in their narratives, one must be prepared for a long session of passion and special expressions. 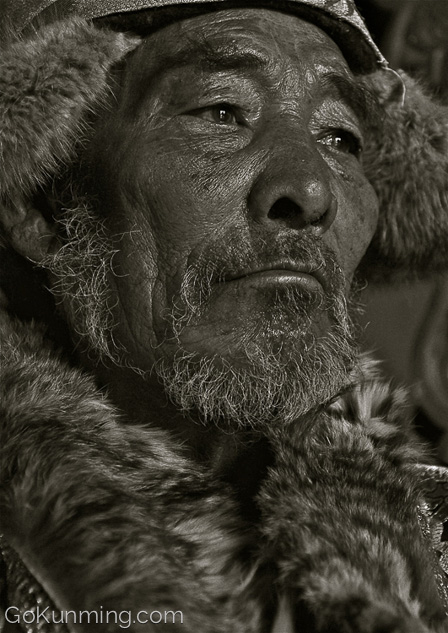 One of Diqing's last remaining traders who traveled along the Tea Horse Road. Taken in 2011 during an interview, it took Ngawa about 15 minutes to warm up his memory banks.

He then began to passionately recount the days of trade and his own adventures along the route. He spoke nostalgically of the vital nature of salt, tea, wool and medicine as well as of journeying for up to five months a year to haul commodities across the top of the world. 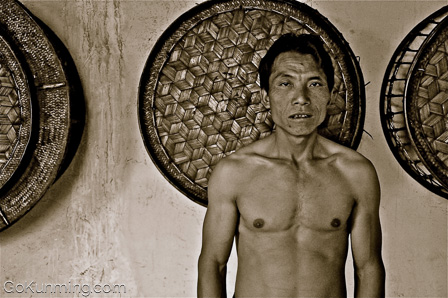 A Hani tea harvester in the Bulang Mountains (布朗山) of southern Yunnan poses briefly in a kitchen. The spring harvest season is an annual event where the famed tea is produced and sold in record amounts. The region was known for the quality of its tea, which was exported along caravan routes to all points of the compass. Seventeen year-old Singha near Batang (坝塘) in western Sichuan poses in her tent during a horse festival. Nomads or "ndrog'ba" have for centuries lived a life on the very cusp of Mother Nature's every mood. Lives lived in perpetual movement following their eternal mates the yak, in the never-ending cycle of looking for fresh pasture. Portrait of a Khampa nomad outside of Litang in 2009. These nomads were traditionally feared not only by outsiders, but have long been revered and feared by other Tibetans for their wanderings along and throughout the Himalayas. Eastern Tibetans were pivotal in maintaining trade routes because they were largely responsible for transporting and protecting valuable cargo. During travels along a previously undocumented strand of the Tea Horse Road in northwestern Yunnan in 2012, we passed through the village of Dura and met up with a local Tibetan. Dozens of Yangtze River villages such as this had their own feeder routes that once connected with the main strand of the great caravan route. Deep in the tea bastion of Nannuo Mountain (南糯山) a Hani woman pauses amidst the tea tree forests to take a break. Along with the Hani, the region's other indigenous people are also master tea cultivators. The Lahu, Bulang, Wa, and Dai people have long been part of the indigenous tea culture of southern Yunnan. This photo taken in 2010. Eating, drinking tea, smoking, and still more tea drinking are all part of any time spent in southern Yunnan. There, one needs time and patience. In the local culture, "if one doesn't have time for tea...one doesn't have time". The photo was taken during an extended 2012 lunch in the Dai village of Jing Mai — home to one of the finest pu'er teas in the province. A Bulang matriarch in the foothills of the Bulang Mountains stirs raw tea leaves into boiling water to create an ancient tea dish. The Bulang occupy the mountainous corridors of southern Yunnan along with the Wa and Hani people, whereas the Dai — the dominant minority group in southern Yunnan — occupy the fertile valleys. A Tibetan elder with a face that reads like a map near Xiangcheng (乡城) in Sichuan. Taken in 2010 during a journey to track down more elders who remember the days of trade on the border between Yunnan and Sichuan. This 'ancient' lived in the forests for over a decade, surviving on only what nature provided. Southeast of Xiaguan in Yunnan, a Yi elder briefly pauses during a discussion of her life and what she has seen. In her late eighties, nearly blind and eating raw eggs every single day along with a little sip of whisky and some ground corn, she has witnessed much change in her life.

In her words, "I cannot quite believe how much change there has been." When asked if she would move from her home and that of her children, grandchildren, and great grandchildren, she replied without hesitation, "Why would I ever leave what I know?"

Thank you for this great article! These are gorgeous photos, full of emotion! The descriptions are short but still manage to strike a chord.

We are witness to the end of a 13 century era, fortunately Jeff Fuchs and others have captured a glimpse witch will remain.

Mike, I don't understand about the 13 centuries, or what era is ending.