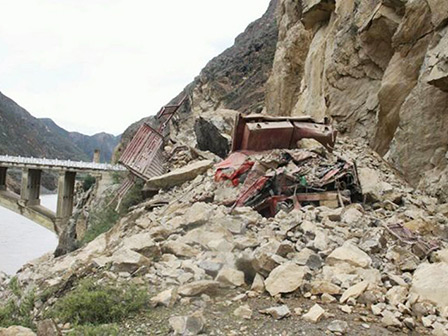 Over the weekend a magnitude 5.9 earthquake struck northwest Yunnan's Diqing Prefecture (迪庆州). Damage to roads and buildings in this area of the eastern Himalayan foothills was extensive. Rescue and relief efforts are ongoing and the provincial government has ordered a temporary halt to many public services.

The quake struck at 8am local time with its epicenter directly beneath the city of Benzilan (奔子栏). In an initial assessment of damages, local authorities reported 600 homes were destroyed and another 55,000 had suffered structural damage. Thousands have been forced to abandon their still-intact homes as a series of 300 aftershocks have followed the original temblor.

Somewhat confused initial reports claimed five people were killed in the earthquake. That number has since been revised downward to three — one of whom was a bus driver whose vehicle was crushed by falling rocks. In all, 40 people were injured, including 17 tourists who where trapped aboard buses but have since been rescued.

Four hours after the quake, Yunnan governor Li Jiheng (李纪恒) visited Shangri-la — formerly known as Zhongdian — to oversee relief work conducted by soldiers from the People's Liberation Army. He was accompanied by Yunnan vice-governor Yin Jianye (尹建业). Following their arrival it was announced the prefecture's 109 schools would suspend autumn terms indefinitely. Nearly 60,000 students were preparing to return to school today, but will now wait until the safety of their classrooms has been assessed.

Travellers in affected areas have been asked to leave until blocked roads are reopened and damaged telecommunication networks can be restored. Traffic along many highways, including State Road 214 (214国道), has been severely disrupted. Trucks carrying tents, blankets, drinking water and other relief supplies have also been hampered by several landslides.

Saturday's earthquake came just four days after a smaller, 5.1 magnitude tremor, struck the same area. While causing some damage, the quake on August 28 was relatively moderate and caused no injuries or fatalities.

If the roads are blocked, how will the travellers leave?

Spoke with friends in Shangri-La/Zhongdian today and the town/city itself was not affected other than people there being able to feel the tremor, wich they reported was not that bad. Travel to Zhongdian itself should not be an issue though travel further north to Deqin might not be advised since this would take one right through the epicenter in Benzilan.

Yes, title is a bit misleading since Shangri-La itself just felt mild tremors. A few things fell off the dish drying-rack, that's about it.

The government has been passing out flyers asking all businesses here in Shangri-La to remain closed (big surprise, no ones closed). Schools also continue to be closed. They expect a larger quake within the next ten days, one that will apparently affect Shangri-La.

I thought the central government was trying to put a stop on spreading rumors...here they are passing unproven information to the masses..
So much for appeasing the panic situations.

"They expect a larger quake within the next ten days, one that will apparently affect Shangri-La."

When I was in Baimachang last May, (site of a March 2013 quake, see link) the local farmers were asking me "When is the next earthquake??"
I had been twice been accurate in the rain forecast therefore they thought I could predict earthquakes.

I don't know what kind of geologist would "expect" an even larger quake within 10 days. The release of tension in the 5.9 and the subsequent aftershocks ought to significantly LOWER the chance of quakes until the tension rebuilds, which of course could take anything from a year to a hundred. I have no idea why anyone would try to install fear in people like that when scientific evidence -or rather, past experience in this case- suggests that such events are unlikely, but yeah, of course can not be ruled out.

Tiger Leaping Gorge on the Shangrila-side is currently closed, meaning no access in and out of Qiaotou to the gorge or from the end of the trek.

Oct 21st.
We just drove up to Deqin, lots of damage but mainly from rock-slides, a few were major. Without exaggeration minor rock-slides were numerous, in the range of 50 to 60, blocking half the road in blind turns, enough to cause an accident.
New sections of highway had sunken zones where fill had been used..

Overall the new roads beyond Dali will be very convenient when completed.