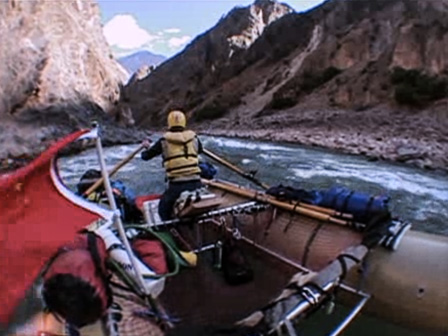 The rivers of Yunnan, as well as all those flowing off of the Tibetan Plateau, have been in the news recently. Hundreds of dams are in the planning stages and the waterways of Yunnan could be altered spectacularly over the next few decades. While contemplating this gloomy possibility we came across a documentary that captures Yunnan's rivers in a way we had not seen before.

Originally released in 2003, The Yunnan Great Rivers Expedition follows a group of whitewater enthusiasts and conservation specialists as they attempt to navigate Yunnan's three largest waterways. The film was shot over two months as the group rafted the Lancang (Mekong), Nu (Salween) and Jinsha (Yangtze) rivers.

However, if you are expecting a documentary solely about whitewater float trips on the Three Parallel Rivers this is not it. While rafts and kayaks are the primary vehicles used by the expedition, the central theme of the film revolves around a difficult core question — what, if anything, can be done to preserve the remarkable landscape and unique cultures of this area of Yunnan? What the film makers found, which included reasons for hope, was a situation much more complex and fluid than they had perhaps envisioned. 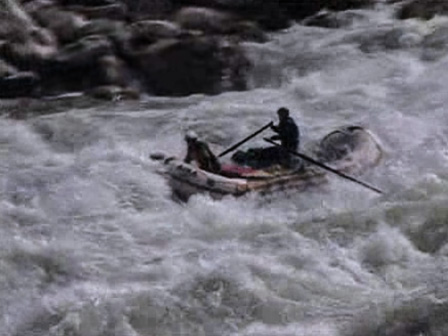 The film was produced by Jim Norton and narrated by his brother, actor Edward Norton. To introduce viewers to area, the narrator briefly describes the "geographic train wreck" that gave rise to the gorges and riverways the team will explore. He also explains that the Yunnan Great Rivers Expedition is a project jointly fostered by the Nature Conservancy and the Yunnan government. Its goal is to assess the viability of whitewater rafting as an ecotourism industry in northwest Yunnan.

The journey begins, somewhat oddly on the middle river — the Lancang (澜沧江) — which is more commonly known as the Mekong after it flows out of Chinese territory. Interspersed with gorgeous shots of towering cliffs and churning water, various members of the team explain the causes and effects of deforestation along the Lancang River.

Introducing rafting to the area is one way crew members on the project hope could replace logging as the primary economy along the three rivers. According to the Nature Conservancy, 80 percent of personal income in the region came from timber before a 1998 governmental ban on the industry. The prohibition led to illegal logging as well as the rise of orchid hunting as villagers along the rivers tried to adjust to changing economic realities. 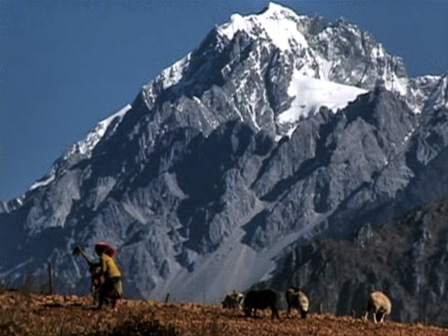 The film departs from its main thrust a bit when it digresses to show a methane collection system fuelled by human and pig waste. One biogas system such as this can replace the wood-burning needs of an entire family, explains one of the conservationists. There is a hopeful scene where he stands outside a pigpen and confidently declares, "This is the animal that's going to save China's forests."

Then it's back to the rivers. Underscoring the rugged nature of the terrain, Norton Jr explains it took the film crew five days to travel 15 miles west from the Lancang River to the Nu River (怒江). Once they arrive, the crew are confronted with rapids exemplifying the waterway is called 'The Angry River'. As they stand on a bluff overlooking pounding whitewater, one of them remarks dryly, "That is one large cup of coffee."

A major obstacle to developing a river rafting industry is safety, and this is a subject participants in the film return to repeatedly. Even if the professionals can run class five rapids with confidence, they must make sure the rivers are safe for tourists and those with no boating experience of any kind. They leave the massive rapids behind in search of a more placid stretch of water upstream. 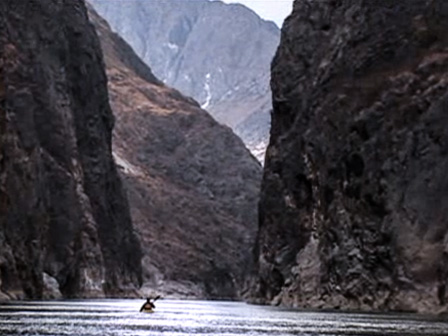 They find it — a three-kilometer stretch where the rapids are challenging but nowhere near as intimidating as the ones they had contemplated earlier. But it is at this point in the film where the expedition runs up against something more powerful and implacable than a roaring river — Chinese bureaucracy. With a phone call, the crew is kicked off the Nu River and no amount of arguing or persuasion can fix the situation. There is no recourse for them when confronted with what they refer to as "the great and powerful Oz."

Earlier than expected, they head instead to the Jinsha River (金沙江). On the final watercourse of the expedition, reality begins to set in on everyone involved in the film. The hopes of introducing whitewater rafting to this corner of China are not impossible, but it is a long shot. In a series of poignant interviews, the raft guides and conservationists point out the cultural differences that make what they are trying to do appear so daunting.

The Westerners making the film come from a place where certain wilderness areas are set aside, only to be used for fun and exploration. In China there is a "radically different relationship with the land." The country's rivers, Jim Norton has come to realize, are a resource to be worked for both money and survival. 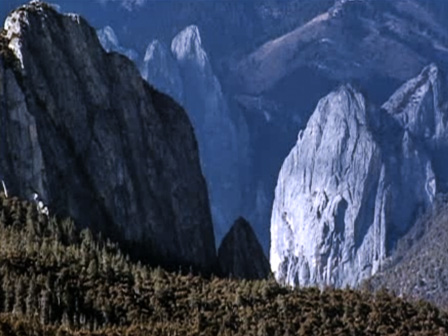 While discussing this, Norton speaks of dams for the first time when he mentions with hints of doom the Three Gorges project downstream. Nonetheless, a series of optimistic interviews and voiceovers close the film. Everyone in the party remains confident that whitewater rafting can be introduced to Yunnan, despite cultural differences and bureaucratic meddling.

The Yunnan Great Rivers Expedition is now a decade old. It is a well-structured and well-intentioned film. At just over 45 minutes the documentary tackles a whole host of issues, including China's lurch toward modernization, changing economic conditions and the preservation of indigenous cultures and the unique places where they live. It offers those who have not yet been to Yunnan a view of one of planet's most extraordinary geographical settings and reminds those who do live here exactly how special the province is.

If the film comes in for any serious criticism, it is with the benefit of hindsight. Yunnan's infrastructure boom was only beginning ten years ago and filmmakers could be cited for a lack of vision regarding just how intense development around the province would be. Otherwise, it is a somewhat quirky but ultimately rewarding film celebrating some of the best things Yunnan has to offer.

The Yunnan Great Rivers Expedition can be viewed online for free at Snag Films. Registration is required and films are interrupted by short commercials approximately every thirty minutes.

I really can't see rafting tourism replacing logging as the main industry. It would be a disastrous turn of events having thousands of tourists who can't swim, going into grade 3-4-5 rapids with guides only interested in making money i.e. the Chinese way.

Don't get me wrong, rafting can be done pretty safely with the right training, equipment and outlook. And there are groups in Lijiang that I know of who do it safely and who have the experience and know how to do so. But in a Chinese environment, if it was pumped as the latest way to make a living, I can see it being a train wreck. You would have wannabe guide cowboys undercutting people who do it safely leading to raft loads of Shanghai/Beijing/Guangzhou people pumping themselves up that they are invincible and heading off to do it. Quickly followed by deaths the shuttering of the industry and a situation probably worse than before.

By the sounds of it the people who made the movie were naive about China and came up with their idea before they got here. After experiencing what China is really like they realised in no way would it be feasible.

The purpose of the expedition was to assess the feasibility of developing a tourism industry running the river. My understanding is they pretty much came to the conclusion that although the river can be feasibly run by experts, the feasibility of training locals to provide river running services would be next to zero.

Not to mention the fact that the dams going up on all three rivers will make river running impossible.

So experts out there, now's the time to get out there and do this before it's too late!

I heard a story associated with the making of this film. Edward Norton was in Kunming assisting his father with the project, and went to Salvadores. He's such a low-key celebrity that no one there even recognized him.