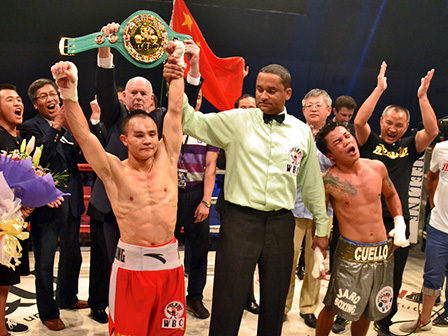 Xiong Chaozhong (熊朝忠), the diminutive boxer from Yunnan, successfully defended his world championship belt this past weekend in Dubai. He claimed victory after 12 rounds against Denver Cuello, a Filipino fighter many expected would handily defeat Xiong.

The fight went the distance and was evenly matched throughout, according to online reports. The earlier rounds saw Cuello with the advantage but Xiong slowly gained enough momentum to earn a 113-113, 115-112, 113-110 majority decision.

With the win, the 30 year-old Xiong raised his career record to 21-4-1, with 11 knockouts. It was Xiong's first win as the reigning World Boxing Council (WBC) straw weight champion.

Xiong claimed the vacant belt last year in Kunming, where he won an unanimous decision over Javier "The Demon" Martinez. In the process Xiong became the first Chinese man to ever hold a belt from one of boxing's four separate sanctioning bodies.

Cuello, who fights southpaw, was injured during the fifth round. It remains unclear whether he hurt his right hand or shoulder, but ringside reports claim the injury clearly slowed him. Before this weekend's fight, Cuello had been undefeated for more than three years, winning a total of 12 fights.

Fittingly, as seemingly no boxing match is complete without controversy, coaches and trainers from both the Xiong and Cuello camps claimed they went unpaid following the fight. The WBC is looking into the matter which seems to center more around promotional companies than the boxers themselves.

Man, I cringe with stories like this. Not the boxing, not the close decision that's all good. and certainly congrats to Xiong.

No, I'm talking about this: "...coaches and trainers from both the Xiong and Cuello camps claimed they went unpaid following the fight."

No money? In Dubai?

I thought the promoters had to put up bonds and prize money in the bank before fight cards.

Well, I'd love to know how this all works out — and how much each boxer gets in the end.