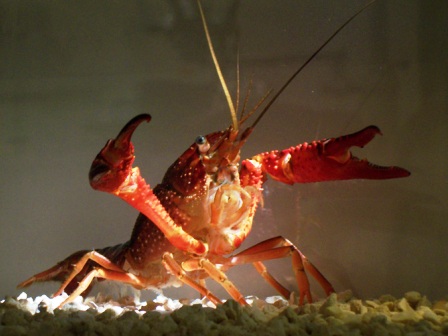 An invasive species of crayfish infesting rice terraces in southern Yunnan has managed to migrate to Kunming. Although officials do not know how the animals arrived in the Spring City, they are fairly certain the crayfish were introduced illegally.

Crayfish — also called crawdads — have been found in the Panlong River (盘龙江) and Dianchi Lake (滇池). City officials are concerned a growing population could threaten biological diversity, farmland and the integrity of earthen dykes common to local agriculture.

The animals live in burrows up to a meter in depth and survive on a diet of plants, algae and insects. Officials worry these burrows will undermine rice paddies. The crayfish are not simply a threat to terraced farming embankments but can also destroy rice crops by eating freshly-planted seedlings.

Crawdads are thought to have been introduced to Yunnan in 2006 in Honghe Prefecture. Since then they have been discovered in Yuxi and now Kunming. Numbers have grown so rapidly in the 1,300 year-old terraces of Yuanyang that farmers report their dykes are collapsing.

The river has had crayfish for about two years. This year there are so many we can catch them with a string bag. It's easier than catching fish in a barrel.

Officials encourage people not to eat crayfish they find in any Kunming rivers. The animals have been linked to outbreaks of rhabdomyolysis, a medical condition characterized by muscle deterioration and kidney failure. Boiling crawdads can eliminate the risk of this condition but does not remove heavy metals that may have built up in the animals' bodies.