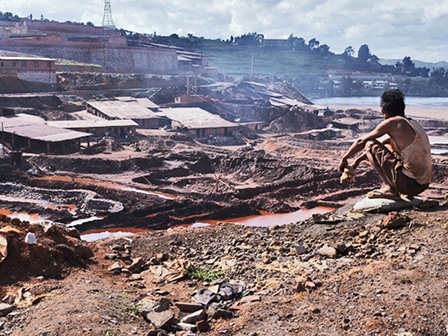 Gejiu (个旧), once the capital of Honghe Prefecture, is a city built around mining. It had the largest tin reserves in China — an estimated 900,000 tons — and most of the city's wealth came directly from this industry. Even the size of the picturesque lake sitting in the middle of town is the result of relentless ore extraction.

Those activities, carried out ever more quickly over the past 100 years, have taken their toll and made the city dependent on a rapidly shrinking resource. An article published by Southern Weekend reports that today Gejiu's tin industry has largely collapsed, sending thousands of families into unemployment and penury.

Gejiu's mining bust was not a sudden occurrence but one decades in the making. The city center is attractively laid out on the shores of Gold Lake (金湖) and its streets still bustle with pedestrians. However, on the town's periphery the picture is more bleak.

Today the city is ringed with mines and those that are still in operation mar the air and water with pollution. Although tin from Gejiu has been coveted for hundreds of years, it was not until the 1950s that is was mined on an industrial scale. The area experienced a boom and thousands of would-be miners migrated there in search of work. The economic upswing lasted almost 35 years.

Ore companies began to lay off employees in the 1990s as production and resources dwindled. At that time one in every four people in Gejiu were connected to tin mining. By 2008 the area's tin reserves had largely been exploited. The Chinese government estimated 90 percent of Gejiu's ore had been mined and the remaining ten percent would take only three to five years to extract. Unemployed miners today number in the tens of thousands. 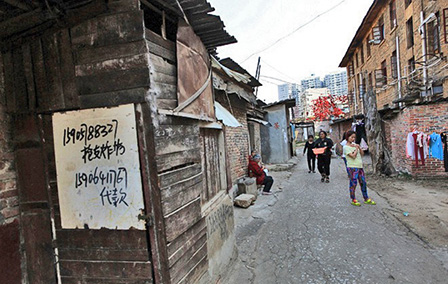 A handbill in Gejiu advertising firearms and explosives

On the outskirts of Gejiu in an area referred to simply as Worker's Village (工人村), illegal mining has become commonplace. People once employed by tin companies now search for new ways to make money. The prevalence of unregulated mines is so common that several buildings have collapsed due to poorly made underground tunnels beneath them. Recently a kindergarten had to relocate when several of its classrooms sunk into the ground overnight.

Accidents such as these are not without historical precedent. In the mid-1950s during prolonged rainstorms, several neighborhoods around Gold Lake were swallowed when mine tunnels filled with water before collapsing. The incident permanently increased the size of the lake around its southern reaches.

In addition to the spike in illegal mining, the city has seen a noticeable rise in prostitution. As a result Gejiu now has one of the highest per capita HIV/AIDS rates in the country. Intravenous drug use has also grown and is exacerbating attempts to curb the spread of HIV.

The proliferation of prostitution and drugs has been accompanied by an increase in crime. The Southern Weekend report chronicles the exploits of a gang of nearly 100 former workers who protected their illegal mines with swords and shotguns. Explosives formerly used to blast new mine shafts are now advertised openly on the streets of Worker's Village, as are guns.

In efforts to rehabilitate the most derelict parts of the city, the provincial government has been promoting sustainable businesses. It has also poured money into social programs. As of 2008, almost 50,000 people — one-eighth of the city's population — were receiving government assistance money. National policy-makers are scrambling to find ways to revitalize what they call "resource-depleted" cities, of which Gejiu is one. For now though, it seems Yunnan's once mighty tin capital will continue to suffer.

I have fond memories of my time in Gejiu and it's a shame to read of its gradual demise. There must be tourism possibilities. Trip down a mine, anyone?

Gejiu is actually much more like a spring city than Kunming. The temperature ranges from 10 to 30 degree for the whole year. But it is too small without continuous ability to develop in the future. It may not a good place to work but absolutely a good place to spend the time when u are too old to go anywhere. Love it.

Gejiu Tin Museum (at the Gejiu Tin Company) is really quite good. They have some old imported computers that are super rare, as well as other historic tidbits.

There was a pretty interesting mountain biking store there a few years ago (2006), I even bought a bike there and rode it down to Xishuangbanna. It was just south of the lake.

For nearby tourism, you have Jianshui, Swallow Cave en-route, and Yuanyang to the south.

Road wise, the ride downhill to Nansha (lower Yuanyang) is a fantastic cycle. Certain tourism potential there, though at last check you had to ignore the tunnel police and pedal past them to get through to the new road down to the Red River. (I've done it twice; once during construction back in early 2002 and once in around 2005.)

They should make a decent museum out of the old train system as they were threatening to do a few years back ... Gejiu was one of two terminal stations of an offshoot of the turn of 20th century, French engineered, narrow-guage line that ran from Hanoi to Kunming.