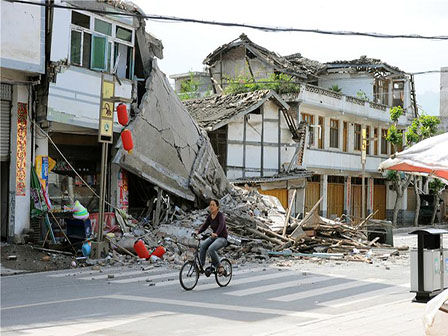 An earthquake that struck central Sichuan Saturday morning raised the specter of Wenchuan (汶川) in 2008. Although not as powerful as the quake five years ago, this weekend's tremor caused widespread devastation, again along the Longmenshan Fault. The full extent of the damage is still unknown, largely due to the area's mountainous terrain and isolated villages.

The magnitude 7.0 earthquake occurred at 8:02am local time, toppling hundreds of buildings and houses in Ya'an (雅安) — 500 kilometers north of Zhaotong, Yunnan, where a string of earthquakes (昭通) have struck over the past year. As of this writing, Xinhua is reporting 188 deaths, 11,000 injured and 150,000 people left homeless.

Reports conflict, but it appears more than 10,000 soldiers were dispatched to conduct search and rescue operations. Li Keqiang (李克强) flew to the area Saturday afternoon to oversee natural disaster relief efforts for the first time since becoming Chinese Premier. An estimated 1.5 million people have been affected by the quake and the Ministry of Civil Affairs has supplied tens of thousands of tents, beds and blankets to critically affected areas.

Major roads, including sections of the Beijing-Kunming expressway were closed to civilian traffic immediately following the tremor. Highlighting the difficulties of reaching some remote villages, an army convoy truck drove over a cliff as it made its way to the disaster area. One soldier was killed and 16 injured in the accident.

In addition to traffic disruptions, power was knocked out in many villages. Several power stations were also taken offline as a precautionary measure. Disaster management officials have also been attempting to drain two newly-formed barrier lakes caused by landslides. Several facilities have been given priority regarding damage analysis, including dams, nuclear power plants, hospitals and schools.

The quake had wide-ranging effects and was felt in Chongqing — 475 kilometers east of the epicenter — where eight buildings collapsed and an estimated 400 others suffered structural damage. In neighboring Yunnan Province, 900 buildings were reported to have incurred at least minor harm. Xinhua reports 1,165 aftershocks have followed the initial temblor, many of them registering more than 5.0 on the Richter Scale.