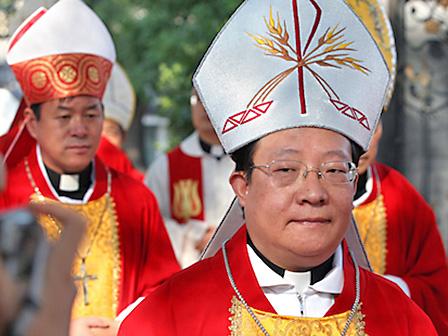 As the eyes of the world's Catholics were fixed on Rome and the inauguration of Pope Francis, another man, half a world away, was ordaining priests without the blessing of the Holy See.

On March 19, Joseph Ma Yinglin (马英林) presided over ceremonies at a Ruili church where he elevated two men to the Catholic priesthood. Ma explained that the ritual was planned far in advance and that its occurrence on the same day as Pope Francis' first papal mass was a coincidence. He told Catholic News Asia:

It was impossible to change the date because many relatives and friends have expected and prepared for this joyful occasion. I hope the outside world would not misunderstand. We ordain priests simply for the need of the local Church.

Ma's actions highlight decades-old tensions between the Vatican and Beijing. Considered bishop of the diocese of Kunming by the Chinese Patriotic Catholic Association (CPCA), Ma was excommunicated by the Vatican in 2006 for assuming the role of priest outside the purview of the Holy See.

The CPCA (中国天主教爱国会) was originally established in 1957 as an extension of the State Religious Affairs Bureau to protect China from "foreign influence". It does not recognize papal proclamations and edicts issued after 1949, including both canonizations and the practices propounded by the Second Vatican Council. Today, offically recognized liturgy and observance rites for China's estimated 12 million Catholics fall under the auspices of the CPCA and not the Vatican.

Argentina-born Pope Francis is the first non-European to head the Catholic Church in 1,300 years. Some observers expect his papacy to be characterized by a more open dialogue with non-Catholic countries, China included. How Ma, and his recent actions, fit into the relationship between the Vatican and Beijing remains to be seen.

The rites conducted in Ruili ordained Father Paul Yue Bangshuang from the Dali diocese and Father Joseph Bu Shuncai from Zhaotong apostolic prefecture. Bu, who is a member of the Jingpo minority, was reportedly joined by 3,000 supporters, many of whom crossed the border from Myanmar to witness the ceremony.

has anyone noticed that on Sunday mornings they cordon off the Catholic church on Ren Min Zhong Lu and some people are standing outside the church listening to the service going on inside, the church seems full so it could be just a safety thing to make sure the Church isn't too crowded,,but I also wonder if you have to been "approved" to worship inside the church?

Deliver Us From Evil
www.rottentomatoes.com/m/deliver_us_from_evil/

Christianity.....it's a great religion it's just too bad no one's ever tried it..

i'm sure this is exactly what jesus had in mind. a bureaucratic, hierarchichal organization of men in funny pointy hats lusting for power with deviant sexual behavior. yep, good documentary. chilling because i'm not sure the priest had any remorse.

@Yuantongsi, could you tell me where the Catholic church on Ren Min Zhong Lu is located exactly?

The only licensed catholic church that holds mass every Sunday at 09.00 am is at 富滇银行 just the opposite side of 东风广场 bus station of beijing road.

I just purchased a pointy hat. And from now on I'd like to be addressed as The Holy abcdabcd. Thank you.

its on RenMing Zhong Lu, as you leave Guo Mei you turn right towards Xiao XiMen and there you are, just next to the bridge.

Thank you. will have a look on Sunday, although that's a bit early.