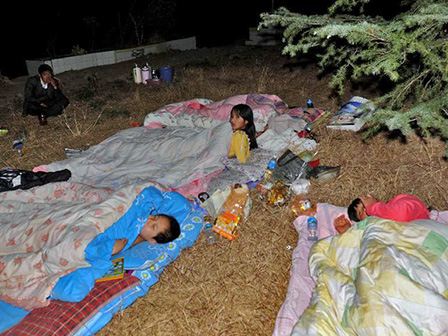 A family sleeps outside after a magnitude 5.5 earthquake struck Yunnan Dali-Bai Autonomous Prefecture

An earthquake in Yunnan's Dali-Bai Autonomous Prefecture (大理白族自治州) over the weekend has caused widespread damage but no fatalities. The magnitude 5.5 tremor struck at 1:41pm local time Sunday after being preceded by two, smaller earthquakes, Xinhua is reporting.

Initial reports said more than 700 homes were destroyed but that number has been adjusted upward to 1,700. Infrastructure and communications systems have also been disrupted. The quake's epicenter was near the hamlet of Xishan (西山乡), roughly 450 kilometers west of Kunming. The earthquake has so far been followed by more than 30 aftershocks.

As of this writing, 30 people have been reported injured, three of them seriously. An estimated 92,000 people have been affected by the earthquake and more than 2,500 homes and other buildings suffered serious structural damage. Provincial army and police response units have evacuated 12,000 people from other houses deemed unfit for habitation.

GoKunming spoke by phone with Bakery 88 owner Karine Kaffrell. She said shaking in Dali Old Town, roughly 100 kilometers southeast of the epicenter, was severe. Kaffrell also said she had seen no evidence of damage to homes or businesses in Dali.

This is the third earthquake to strike Yunnan province in the last 20 days. A February 19 temblor shook Qiaojia county (巧家县) in northeast Yunnan. That quake was followed two days later by another near Pu'er. Over the same time period 4.5 and 4.7 magnitude tremors were reported in Sichuan. 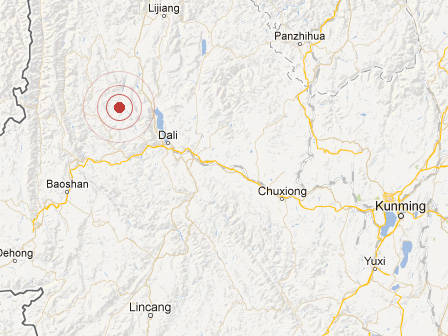