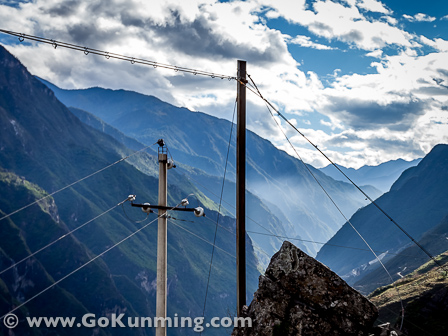 Yunnan's power grid is now completely integrated and no household in the province lacks electricity, according to a report by China Daily. Earlier this month the final rural village in Yunnan without access to power became wired.

The Lisu (傈僳族) village of Shudi (树底村) in northwest Yunnan's Lijiang prefecture became electrified on January 8. Oddly, the story was posted the same day on micro-blogging service Sina Weibo but failed to make headlines in provincial or national newspapers until 21 days later.

Shudi is home to only 36 residents. The China Daily reported villagers — perhaps obviously — welcomed the addition of electricity. A villager surnamed Zhu was quoted as saying the new utility is most important because it will ease deforestation in the area by providing a long-missing alternative to burning wood for cooking and heating.

Beginning seven years ago, China Southern Power Grid and the Yunnan government began a project to bring electricity to every town in the province. In total the endeavor cost 5.71 billion yuan (US$917 million) and supplied power to more than two million people previously living without it.

The province continues to upgrade its electrical infrastructure. In 2012 power companies spent a reported 12.8 billion yuan (US$2.05 billion) on grid improvements including new transmission lines to mountainous rural areas.

Due to an ever-expanding system of hydroelectric dams, Yunnan is currently flush with electricity. Last year the province exported an estimated 200 million megawatt hours of power to Guangdong province alone.