By Chris Horton in Features on September 4, 2006 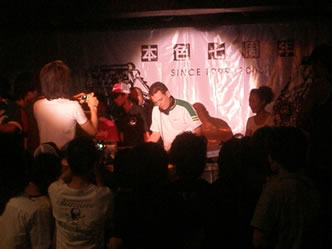 DJ DSK is Kunming's top DJ, if you're not into techno remixes of John Denver classics. Not only has he steadily developed his funky and soulful musical style over the last few years for a growing local and foreign listener base, this British DJ has worked to nurture local DJ talent in Kunming and elsewhere in China. GoKunming sat down with DJ DSK via the miracle of email and asked him about the ins and outs of being a foreign DJ in Kunming and the future of music in China.

GK: Let's get the obligatory questions out of the way first, how long have you been in China?

DSK: Around five years; originally I wanted to learn Chinese. I came from Laos and stuck a pen in the map. I first lived in Yuxi then moved to Kunming.

GK: What got you into spinning records?

DSK: My Dad bought me a mixer when I was around 13-14. I started messing with sounds from tape decks and gradually progressed to turntables and slowly to a decent pair of Technics and a mixer when around 16-17.

GK: What is the state of music in China right now?

DSK: Haha, please understand I am talking about the general clubs in China as in a lot of cities there are one or two really good clubs and DJs... I am just talking about the general situation. The situation in Chinese clubs is a bit rough around the edges, but getting better. In Chinese clubs you can hear the worst music in the world but club culture is a new thing and it arrived too quickly. Things are looking great now though with some great upcoming hiphop and electronic music DJs. I just hope people support them instead of fake foreign DJs.

GK: How many DJs are actually scratching records?

GK: What is the Chinese reaction to record scratching as opposed to digital DJs?

DSK: In China it's cool to use vinyl because they see it in videos but the general public have no idea what you are doing, they just wanna see a foreign DJ acting like a monkey in a zoo. I try to use some Chinese in my sets so people can understand a bit better what I'm doing. I have had a few clubs in some cities where people understand and go crazy when you start cutting it up.

GK: Where do you get your records? Is there anywhere that sells vinyl in China?

DSK: Yeah there's a few people selling vinyl but most of them charge a lot of money. I use the Internet or friends abroad. I now also use serato ssl which allows me to mix digital files with the use of turntables.

GK: What cities have been most receptive to your music?

GK: What are your favorite places to spin?

DSK: Anywhere that is fun; I love the Castle Bar in Nanjing and b-boy battles in Guangdong/Hong Kong and also had some great parties in the past at the Speakeasy here in Kunming. I had a fun gig in New Delhi last December and Bandung in Indonesia this past March was great.

GK: In what direction do you see music in China moving during the next few years?

DSK: Hopefully they will stop listening to the awful music that they do at the moment in clubs... if you ever go to Kundu here in Kunming it's disgusting, you never hear any music with soul. I have heard some really good hiphop being produced by people like Sketch Krime (originally from Yunnan but now in Beijing) and DUMDUE aka DEEARNA in Guangdong.

GK: Who are the better Chinese DJs?

DSK: DJ Wordy and Shorty from Beijing are amazing scratch DJs, DJ Fatkit is a great b-boy break DJ in Guangzhou, DJ VNutz is organizing probably the only true hiphop night in China in Shanghai. Liu Yan also tries hard in Kunming to play decent electronic music which is not easy for a local, he definitely needs more support. Soul B in Hong Kong, because he's a good old buddy for over 10 years with a great knowledge of all things funky.

GK: Do you have any upcoming performances in Kunming or elsewhere in China?

DSK: I have many gigs but the only good ones will be Sept 23rd's Back to the Roots Blue Ice in Shanghai, October 1st In Macau with Spyda Monkee (Thailand's top scratch DJ - still being arranged). Look out for the next funk party at Speakeasy and please come and dress up!

DSK: Go listen to Nina Simone's "Funkier than a mosquito's tweeter" - it's amazing.

For more DJ DSK, check out the links below:

Freestyle from 2 years ago in Pompidou Club Wenzhou - link