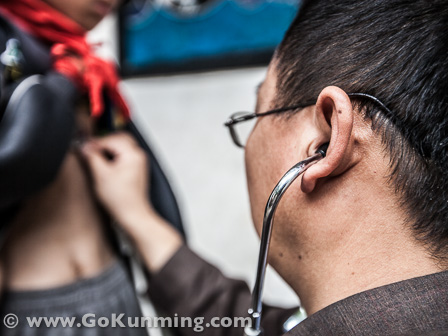 An official white paper issued January 24 by the provincial health department has found the Yunnan healthcare system in "serious need of reform." In his presentation of the report, Yunnan Health Department director Zhang Xiaochun (张笑春) concluded that both the quality and availability of healthcare in the province are negatively affecting life expectancy.

The year-long study found that although the average Chinese person can expect to live to the age of 75, life-expectancy in Yunnan is 69.5 years. Zhang linked earlier mortality directly to health services in the province.

Zhang said there are at least 96 towns and villages in the province with no practicing physicians at all and an additional 216 townships with only one doctor or registered nurse. This general lack of care, he said, has led easily preventable conditions such as rickets to become widespread in some rural areas.

In his report, Zhang recommended increasing government spending on healthcare by 60 percent over the next three years. Much of that money would go to training more doctors and establishing rural health cooperatives.

Those cooperatives would begin with the construction of 1,000 village health clinics and 200 township hospitals. More money would also be allocated for rural doctor salaries. According to Wednesday's report, attracting and retaining qualified medical health professionals to work in the countryside is often extremely difficult because of low wages.