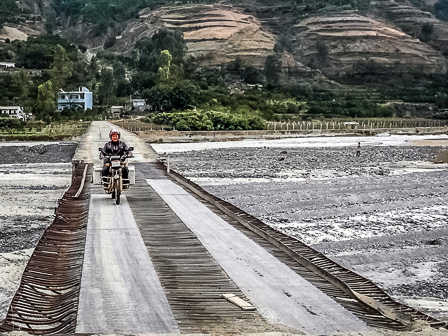 Editor's note: GoKunming recently cycled from Dongchuan (东川) to the confluence of the Xiaojiang (小江) and Yangtze (长江) rivers. This article is the final installment in a series of four about travelling in northeastern Yunnan. The first day's ride was through the Hongtudi Scenic Area, while on the second day we cycled near Jiaozi Snow Mountain. On our third day we reached the Yangtze River.

Gele (格勒) is a small rural town perched on a peninsula that pokes out into the confluence of the Yangtze and Xiaojiang rivers. We had ridden our bicycles there through the mountains from Dongchuan. Gele was our last stop before heading back to Kunming via Dongchuan. We expected an easy ride and so began a leisurely morning by heading to the ferry that would take us across the Yangtze and into Sichuan.

Perhaps still partially asleep and confused without coffee, we went to the wrong pier. The incorrect route did afford us a chance to see the majority of the town. The primary occupation of Gele's 3,000 residents is farming and we passed by orange and date groves and then trestles wreathed with young watermelons. 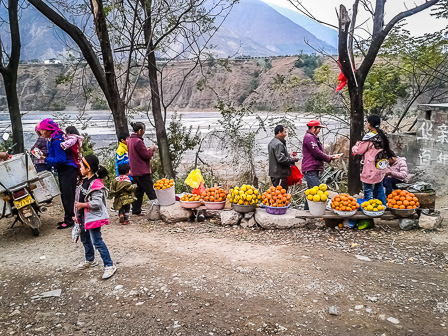 We crossed a bridge over the sad and ugly Xiaojiang River and reached an intersection. A huge billboard faced the road. It depicted a planned dam and people waterskiing on the perfect blue lake behind it. It finally dawned on us that we had gone the wrong way.

Backtracking through tomato fields, we arrived at what we expected to be a pier. It was more like a dredging pit, with massive mounds of sand and dirt piled on the shore. No boats were in sight. We tossed our bikes into a pickup conveniently idling nearby and the driver took us to the actual ferry terminal. 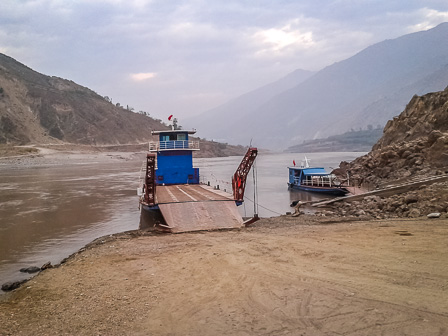 There wasn't much to it. A dirt road led down to the river and a flat-bottomed, diesel-powered boat. The shores were not particularly pretty during dry season — just mud-brown flats with no vegetation. The Sichuan side of the river looked basically the same, except for the forested mountains rising in the distance.

There was a bit of a wait on the boat as a dump truck piled with what looked like hotel carpets backed incrementally onto the ship. A few carloads of tourist showed up to snap pictures and then, just as abruptly, left. Otherwise the boat was far from loaded. It was the four of us and our bikes, the carpet truck, two men on motorcycles and a few children staring dumbfounded at the weirdly dressed foreigners. 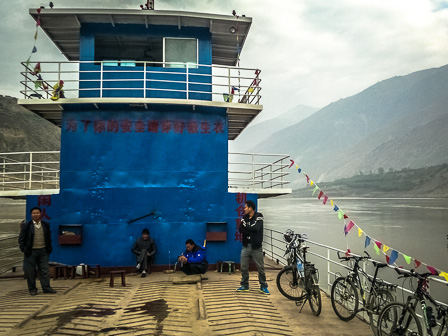 Our trip across the Yangtze was a bit anticlimactic. The powerful ship eased out into the current and made the crossing in under a minute. It was difficult to imagine that the 50-meter expanse of murky water we had just crossed eventually turned into one of the world's mightiest rivers.

Once the boat reached the shore the motorbikes and dump truck roared away in a billowing cloud of exhaust. We jumped off the ship into Sichuan. The boat captain, perhaps sensing our confusion as to what we should do next, yelled that we should pick up some river rocks scattered along the shore. "Grab some qishi" he screamed. "And hurry up, we have to go back." 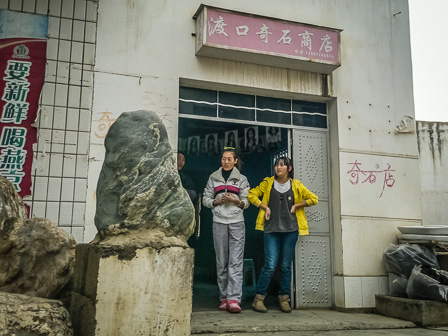 We dutifully clambered back aboard, hands empty, wondering what "qishi" meant. The boat crossed the river and we pedaled through a phalanx of camera-toting tourists and returned to our guesthouse.

For the first time we noticed a store across the street from where we were staying. Inside they sold 'strange stones' — or qishi (奇石). These were colorful rocks taken from the riverside and polished. The prices we were quoted were ridiculously high. We should have followed the ferry captain's advice. 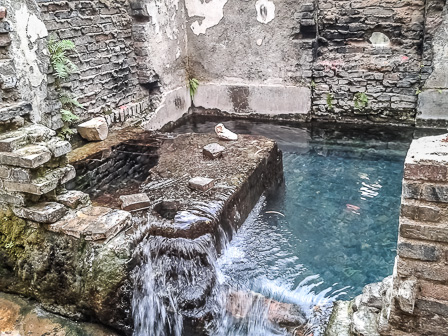 Besides the ferry crossing, we had heard that somewhere in Gele there were hot springs. When we found it, the single spring turned out to be a bit of a sad affair. There had obviously once been a structure built around the spring. The walls still stood — although they were in serous disrepair — but the roof had long ago disappeared.

It was actually a refreshing change when compared to Kunming's dolled-up hot spring spas. This single water hole was rustic, quiet and we had it to ourselves. We settled slowly into the scalding water and collectively let out a sigh. After three days on bikes and three nights of near-freezing temperatures, the water was heavenly. 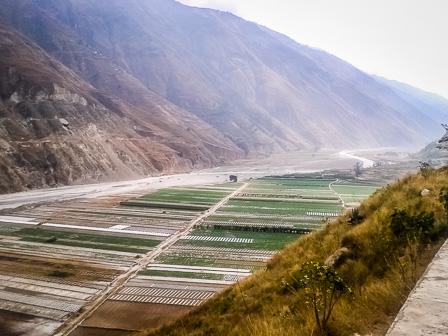 An hour later, blissfully warm and slightly pruned, we returned to our guesthouse. After lunch we packed up our things and began the ride back to Dongchuan. The road was smooth and lined with trees but not flat as we had expected. To our left lay the valley of the Xiaojiang River.

The river, white and sickly-colored, ran at barely a trickle through the wide plain. Fields that we surmised must be completely inundated during the rainy season were green with crops. Other areas that hardly looked fit for planting were nevertheless tilled neatly into rows. We couldn't fathom what would grow in the gray, pebbled dirt. Dongchuan was 57 kilometers away. We had thought the ride would be through the valley itself, following the river. We were wrong. Instead we still had one long 500-meter vertical climb remaining.

The hills on our right were spotted with trees and occasionally opened up into wide, rocky rifts that looked to have once contained tributary rivers. Perhaps because it wasn't the rainy season, they were all completely dry. On the other side of the valley, parched and scarred hills were criss-crossed with tiny trails that led to lonely houses. Half the ride was uphill, but the ascent ended suddenly and again we were headed downhill. The road finally crossed the river and leveled out. There the river was a bit more clear and healthy-looking. Plastic greenhouses lined the riverbed and above everything on a ridge, we could see the outline of the immense and solitary tree we had ridden by three days earlier.

The road circled around a mountain of stacked coal and the two snow-capped mountains that loom over Dongchuan came into view. From there it was a short ride into town and to the bus station. We climbed onto the bus to Kunming, only slightly concerned about how badly we smelled. Buses for Dongchuan leave every day from Kunming's North Bus Station (北部汽车客运站). The first bus departs at 6:45am and others leave every 15 minutes until 7:50pm. Tickets cost 52 yuan and we were charged an additional 40 yuan per person to stow our bikes under the bus. The journey takes between three and seven hours depending on traffic conditions.

Once in Dongchuan, tickets to Gele can be purchased at the Dongchuan Rural Bus Terminal (东川农村客运站). Buses leave for Gele at 8:30am, noon and 4pm. Tickets cost 15 yuan and the trip takes roughly one-and-a-half hours.

GoKunming recommends the Little River Restaurant and Guesthouse (小江饭店). Their rooms are comfortable, clean, have great views and cost only 20 yuan per night. We ate three meals at the restaurant and every one was wonderful. They can be reached by phone at 62518529 or 13888176467. The sort of fascinating article GoK does so well. Thank you.