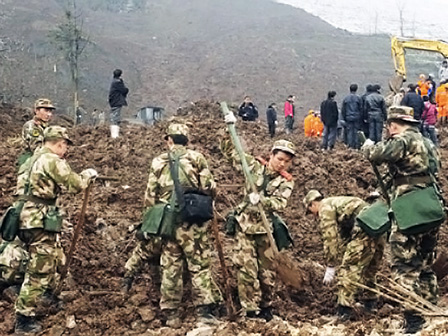 Residents of Zhaotong prefecture (昭通市) whose family members were killed in a landslide were further distressed when the bodies of their deceased loved ones were cremated without permission. The local government and rescue workers have taken the unusual step of publicly apologizing to the bereaved families, InKunming is reporting.

The landslide occurred January 11 and buried 16 homes in Gaopo village (高坡村), a rural hamlet in far northeastern Yunnan near the Sichuan border. In total, 46 people were killed, including 27 adults and 19 children. Two people were also injured.

Rescue workers spent two days digging through the wreckage and looking for survivors. They then cremated the remains of all the victims without first informing surviving family members.

The cremations, according to relief officials, were done in haste to prevent the spread of disease. Local funeral parlor facilities where under renovation at the time of the landslide which made preserving the remains of those killed impossible.

Angry and bereaved family members gathered outside relief headquarters January 13 to protest once they received news of the cremations. The crowd eventually dispersed at 2am when disaster relief coordinators released the identities and death certificates of the deceased. The following morning local government officials, alongside aid workers, issued handwritten letters taking responsibility for the situation and expressing their regret.

National and provincial authorities have together earmarked 61 million yuan (US$9.8 million) for rebuilding efforts. Victims' families will each receive 10,000 yuan (US$1,600) in death benefits from the government. Those payments are not connected to the cremations, but rather are routine government protocol following a disaster.

Northeast Yunnan has been repeatedly struck by calamities over the past six months. In July 2012, Zhaotong prefecture was hit by severe flooding, which displaced more than 100,000 people. Two months later the same area was shaken by a pair of 5.7 magnitude earthquakes.

Locals are now demanding an inquiry into whether the landslide was caused by mining activity nearby: