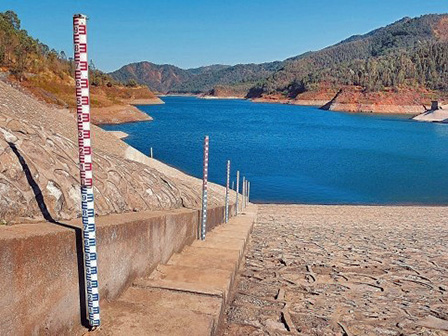 Editor's note: An unedited version of this article was mistakenly published on Tuesday, January 9. It has since been reworked. Our apologies.

In what has become an annual occurrence, Kunming municipal water authorities have announced the city's water supply is rapidly diminishing. A fourth consecutive year of lower-than-average rainfall has again led reservoir levels to fall significantly.

In particular, Yunlong reservoir (云龙水库) is drying out quickly. Yunlong reservoir supplies Kunming with 70 percent of its water – with Qingshuihai (清水海) and Songhuaba (松化坝) reservoirs providing most of the remaining 30 percent.

Although supplies are not as scarce as last year they are noticeably low. Officials estimate that if Kunming were to use water exclusively from Yunlong reservoir, the lake could support the city for a maximum of 50 days.

The remaining 20 million cubic meters of water are referred to as dead, or inactive storage — water that must remain in the lake to maintain fish stocks and sediment levels. A lake's inactive storage water usually lies below a dam's pumping facilities and is difficult to drain.

Last year the reservoir's levels dropped to historic lows and flirted with dead storage limits before the rainy season began. Water management officials estimate that Yunlong reservoir will need three to five years of average rainfall to once again reach a desirable volume.

If the past few years are any indication, Kunming could experience water rationing in the near future. Last year, water pressure throughout the Spring City was lowered as a conservation measure. That initiative was followed by rolling blackouts and occasionally the water in some apartment complexes being shut off completely.

Dianchi is there waiting to draw off, just need to clean it up. The present water supply resources and infrastructure are not enough to keep KM supplied in the future.

I hate it when there is a water main break and they take 3-24 hours to repair it. God knows we can't afford to let water waste.