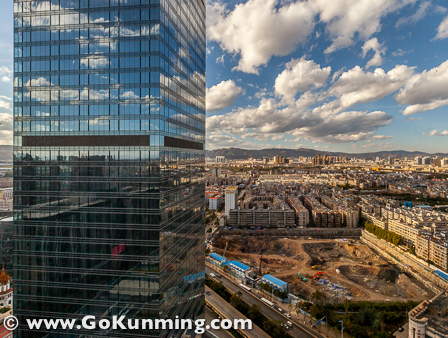 This announcement comes just days after state-run media suggested the Chinese economy should move more towards service industries and technology while relying less on construction as a means of keeping the economy strong. A sudden drop in residential sales coupled with an effort to reinvent the national economy could mean the Spring City is in for a serious correction to its real estate market.

In October, usually a strong month for the housing market in Kunming, sales of new dwellings were down by 5,818 units, a drop of 26 percent compared with the previous month. The national average over the same period saw home sales drop by six percent.

If the current slowdown in the real estate market continues Kunming could experience a serious housing glut. According to government statistics the city already has 4.75 million square meters of unsold residential space, largely in new apartment blocks.

The urban renewal strategy of aggressively demolishing shoddily built neighbourhoods and erecting high-rises is the legacy of former Kunming party secretary Qiu He. The affects of his "urban village transformation program" (城中村改造) can be seen in the more than 300 real estate development projects currently underway in the city.

Continuing construction may make the number of vacant residences rise further. City officials are predicting that within five years the Spring City will move ahead of Shanghai in per capita residential space. By June of this year, Kunming had already surpassed Shanghai in terms of both per capita retail and office space. 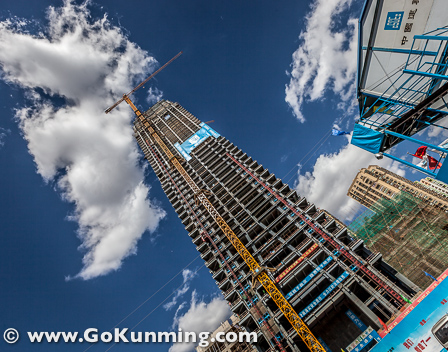 Kungang Steel's 219 meter Science and Technology building on Dianchi Lu
© Copyright 2005-2021 GoKunming.com all rights reserved. This material may not be republished, rewritten or redistributed without permission.

I have little doubt that there will be a rather large price and supply readjustment to the Kunming property market. Look around at night to see how many lights are on in buildings and you will see possibly 20% in new buildings. Once the price starts dropping, all those holding these unproductive assets (who bought them thinking the price will always rise) may end up wanting to sell before the price drops further... then you are in for a real price readjustment.

It is needed though, considering rental prices in Kunming are beginning to exceed that of Manhattan. That's when you know the real estate market is out of control.

A rather large % of Chinese growth comes purely from real estate, I have heard estimates ranging from 1.5% to 4%. If the middle of this range is correct (say 2.75%) disappears, China's growth numbers start to look considerably worse at less than 5%.

Wonder how they'll cope with the millions of migrant construction workers in a year or two when constructions grinds down to a 10th of what it is now. Seems like President Jin will be juggling several hot potatoes soon. I'll be looking for an apartment next year, so naturally I wouldn't mind a 15-20 percent drop in real estate prices personally, although I doubt it will be that much. The Chinese characteristics of this particular area of economics tell me no one wants to even consider selling with a loss unless the bank is there, knocking at your door, and the Chinese generally have a significantly smaller percentage of the RE value mortgaged than we on average have in the West due to savings and/or family loans before coughing up with the deposit.

Come to think of it, predicting what's going to happen in China it's a bit like putting on a blindfold, aim, and hope the dart ends up somewhere in the general direction of the board.

Rent more expensive than Manhattan? I pay 200 euros per month for a modern 120-meter 3-bedroom flat with 2 bathrooms and 2 balconies. And who is President Jin?

Sorry cloudtrapezer, I was talking about recent comments about rental space for shops, not for apartments.

Personally, I do not see a huge re-adjustment of prices anytime soon.

The reason is that a lot of this property was bought for investment and is not used for homes. Many are undecorated and will remain so. Many Chinese are still looking to buy a bargain, but again as a possible investment.

No-one is in a hurry to sell, except developers. Unless the banks get heavy with them, and a red envelope usually cures that, they will not drastically drop prices to sell units. In fact if they did it would affect their equity, as the housing stock would be worth a somewhat less on paper.

Many private owner here have 2 or more properties. I know one guy with over 30. Many local companies also own properties, also mostly undecorated. The only thing that would force people to sell would be if there was a recession that hit China and people needed to liquefy their assets. Property prices could then tumble due to a rush to sell before the bubble burst, and this would become a self fulfilling prophecy.

But most Chinese will play the long game.

@tigertiger I agree. As time goes on the cost of materials rises so the price of home won't go that low.

@tigertiger, I see a huge problem with all the properties owned here in china as an investment. With the poor quality of construction how many years before your investment has reached it peak potential and then begins to decline. When the value starts to decline will people panic and start selling not wanting to pay for the finish costs and maintenance costs which are beginning to soar over the years. We have property now bought in new complex 4 years ago and maintenance costs are rising and talking to real estate people value of our place has risen very little since my wife bought it. Wife also owns home in building that is 20 years old and value is dropping very quickly. Read recently were most of chinese that can afford to buy the bigger homes being built now days have purchased and that units will have to be downsized considerably in the future to help future generations purchase homes. You can always say something is worth a certain value, but if their is no market for product price will have to fall? I might be wrong, but in USA people bought homes for years because it was supposedly a good investment and they said the price never falls on homes. Several people i know have lost at least 40% of their home value and millions have lost their homes entirely. Bankers for years sold the idea that a mortgage was a good investment because of the tax deduction. What a pile of bullshit that was and people bought it, now younger people in USA are refusing to purchase homes because of what happened to their parents.

tallamerican touches on the things that I am talking about.

The banks in America were doing some rather disturbing lending, lending over up to or over 100% of property values based on the idea that property values would always rise. I know because I worked with the heads of lending for a bank in NZ - they would often go to big conferences and hear what others were doing. These banks were delusional about house prices, believing they would always rise is failing to see that real estate is simply another capitalist based market, which means it will work in boom/bust cycles, the magnitude of the cycles usually being decided by speculators.

China is in a situation now where its economy is growing and has been for a good long while now. Their economic growth has resulted in massive infrastructure and housing development. But the market is now both saturated with new houses and suffering from a lack of real buyers - people that will live in and own the house. It is being driven by speculation from rich people who own many houses as investments, most of them have the same belief that real estate prices will only ever go one way, partly because for the past 20-40 years thats what it has done. At the same time Chinese growth is slowing, while still outstripping the west by a long way, a large chunk of the growth comes from one market - real estate. Add to this Chinas rising personal credit and you have potential for house price catastrophe.

The prices also speak for themselves. The median multiple ratio in China is beginning to be rather ridiculous (this measure median income to median property value). In my country, this is over 8:1 (8 times the median income to get the median house price) which is considered "unaffordable". In many Chinese cities this ratio is 20+:1, ridiculously unaffordable. In a place like Singapore or HK this is OK due to extremely limited land and such high demand for it, but in a place like Kunming... that sort of ratio will guarantee one thing - empty buildings.

This from the guy that predicted the housing market collapse in the US and the recession:

"No country can be productive enough to reinvest 50% of GDP in new capital stock without eventually facing immense overcapacity and a staggering non-performing loan problem. China is rife with overinvestment in physical capital, infrastructure and property. To a visitor, this is evident in sleek but empty airports and bullet trains, highways to nowhere, thousands of colossal new central and provincial government buildings, ghost towns and brand new aluminium smelters kept closed to prevent global prices from plunging."

At the same time though I completely agree with Danmairen:

"...predicting what's going to happen in China it's a bit like putting on a blindfold, aim, and hope the dart ends up somewhere in the general direction of the board"

I can't find any decent info on Kunming regarding house prices, but we could definitely guesstimate a little.

How close am I?

You've just dashed my hopes of settling down in Khartoum or Rabat, though Louisville, Kentucky is looking pretty good!

@blobbles, very nice reading. I have looked at a lot of new developments in kunming and an average 2 bedroom would be 80-100sqm. That only makes your figures even more disturbing. Typically an efficiency would be classified in the 40 sqm range. I read an article recently and i am sorry i cannot reference it, but it showcased super small homes designed very effectively to utilize space so the average chinese worker could afford to purchase a home. They would be in the 20-30 sqm range and would cost less than 200,000 rmb.

It would be interesting to see what percentage of the new home costs could be attributed to the property cost / property tax developers have to pay to cities like Kunming. If housing development slows way down how are chinese cities going to survive financially?