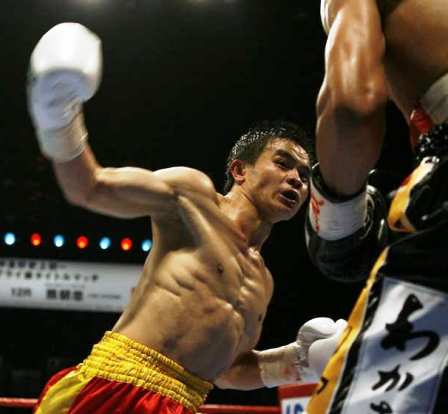 Ever since the Yunnan Honghe Bulls professional basketball team was kicked out of the Chinese Basketball Association in 2009, the province has had very few sports highlights. That will change November 24 when Yunnan native Xiong Chaozhong (熊朝忠) will try to win the vacant World Boxing Council (WBC) strawweight world title in Kunming.

Xiong (19-4-1, 11 KOs) will face Mexican fighter Javier 'the Demon' Martinez (13-3-2, 6 KOs) at Kunming Municipal Gymnasium. The fight will be the Wenshan native's second attempt to capture the championship after losing a title bout in Japan in 2009.

The diminutive boxer — Xiong is 1.49 meters tall — will fight on Saturday in what is expected to be a sold out arena. The match was originally scheduled for October 27 but was postponed after Xiong fractured his hand in a previous fight. Xiong told Fightnews that although his hand is still not 100 percent healed, his fans should not worry:

In my last boxing match, I broke my hand in the second round. I still was able to finish the competition and won. Pain is not a problem for me. I have determination. I cannot be stopped.

While any championship fight comes with serious pressure, Xiong has the added burden of trying to become the first Chinese boxing champion ever. If he wins, Xiong will also be the first Hmong — or Miao (苗族) — man to win a world boxing title.

Xiong versus Martinez is scheduled to begin at 9:18pm. An undercard bout featuring junior lightweights Jomthong Chuwatana and Ranel Suco will start at 8pm. Tickets are available through several online outlets and cost between 180 and 3,080 yuan. The championship fight will be televised live on Yunnan TV.

Xiong should win this and hopefully his wrist has fully recovered.

Anyone know the result... I had to teach while it was being shown.

Its only over now. Xiong won as expected. To become the first male Chinese boxing champion from a major organization.

Wow. Congrats to him. Thanks @MSK