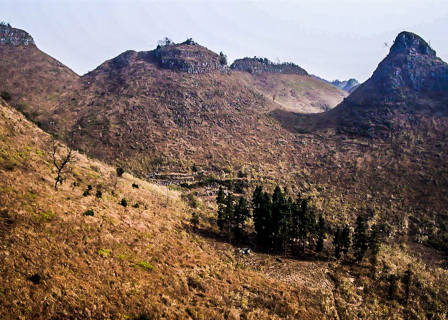 Last Sunday business leaders from around China attended an environmental forum held in Mile to discuss the increasing risk of desertification in Xishuangbanna, Wenshan, and the Three Parallel Rivers Protected Areas, according to a Kunming Information Hub report.

The conference was held by the Society Entrepreneur Ecology (SEE), which was established by businessman Liu Xiaoguang (刘晓光). Originally formed in 2004 to combat desertification and sandstorms in Inner Mongolia's Alashan region, SEE has now broadened its scope to include environmental concerns in Yunnan.

The forum included a lecture by Xiao Jin (蕭今), a professor at the Chinese University of Hong Kong. Jin explained the links between the province's porous Karst topography, upland forests and water supplies.

110,000 square kilometers of Yunnan is Karst, comprising 28 percent of its land area. Karst topography drains very quickly and even in seasons with heavy rainfall, can be characterized by a lack of surface water. This quality can make irrigating cropland difficult and leads to higher water usage.

One solution put forth by Xiao was to stop desertification by preventing deforestation. She suggested that if the incomes of farmers living in heavily-wooded areas could be raised, they would stop clearing forest for new fields. Xiao said farmers should be encouraged to maintain and manage forests adjacent to their land.

Deforestation is linked to desertification through a complex system of feedback. Trees pull water from the ground and release 99 percent of it back into the atmosphere through transpiration. This release of moisture in turn increases local rainfall, continuing the water cycle. When trees are removed from an area, especially river valleys such as those in Three Parallel Rivers Protected Areas, water levels across the entire system fall.

During the forum, Li Shuanke (李栓科), editor of Chinese National Geography magazine, said that preserving forests in the mountainous areas of Yunnan would require new ways of thinking for the people living there. Preserving trees eventually leads to higher river levels and primarily helps people living downstream from mountains.

Li argued that convincing farmers in upland or high elevation locations to conserve forest for the benefit of those in lowland areas would be tricky at best. He suggested implementing a system where profitable farms in low-lying areas share some of their earnings with farmers maintaining forests in the mountains. Li did not give details for such an arrangement.

To date, SEE has raised 90 million yuan (US$14.4 million) for its environmental initiatives. The organization includes some of China's wealthiest business people, including the president of Yunnan Red Wine, Wu Kegang (吴克刚) and the CEO of Huayuan Property, Ren Zhiqiang (任志强).