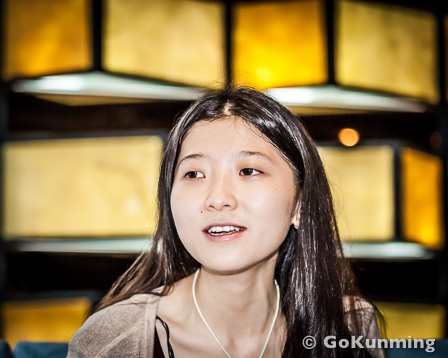 Kunming native Huang Xibei (黄夕倍) is only 23 but has been performing all sorts of live music for almost a decade. She appeared last year on Qinghai Satellite TV's Blossoming Flowers 2011 (花儿朵朵) singing competition, where she finished second.

GoKunming caught up with Huang at Alei Lounge during a very brief break in her hectic schedule. She met us after just returning from a stint performing and sightseeing in Beijing. She was leaving the next day to fly Europe, where she planned to roadtrip around France and Spain with a few friends.

GoKunming: When did you start singing?

Huang Xibei: I've always loved singing and dancing, but as a child I never took it seriously. It was just for fun. As I got older I began to look at music more intently. I studied four years at Yunnan Art Institute (云南艺术学院) but secretly I wanted to be a poet.

GK: Is your family musical?

Huang: Yes! Some of them are. My cousin is named Chen Sa (陈萨). She is a classical pianist who has traveled abroad for competitions. She plays Frédéric Chopin especially well.

GK: So you've loved music your entire life and you have a musical family. What is your earliest musical memory?

Huang: I wasn't there for it, but I remember repeatedly watching a video of my cousin playing for Jiang Zemin. Other than that, my father's love of Beijing Opera is part of my childhood memory. He was always listening to it around the house. 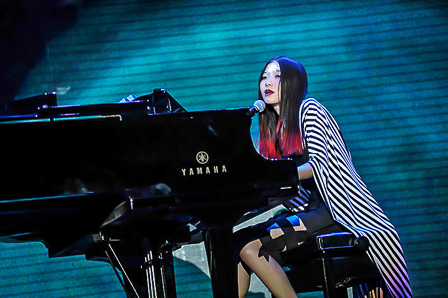 GK: Who or what are your influences?

Huang: It's been a long evolution. When I was 14 years-old I think it was Kurt Cobain. I was in a band then and we sounded quite a bit like Avril Lavigne. I grew up some and wondered what the hell we were doing. We couldn't even play chords.

At some point I watched a video of the Montreal Jazz Festival and that really woke me up. I started listening to early Ray Charles and really began paying attention to music when I was around 18.

Now I listen to all sorts of different music — pop, Jazz and rap. I like Jay-Z and listen to a ton of Björk. Her voice is incredibly unique. I prefer performing songs I've written but I do sing covers from American, Chinese and Japanese artists. I've gravitated more toward playing Jazz music recently.

Outside of music, my grandmother has been very influential. She is a strong, free-thinking Buddhist woman. She has opinions and she expresses them. She's also got style.

I also enjoy reading books by Milan Kundera and many of the outfits I wear onstage are inspired by Japanese fashion designer Rei Kawakubo.

Huang: Because it's what I like right now. I am not performing to become rich, I'm performing what I have a passion for, regardless of whether it is popular.

Huang: The best story isn't about me at all. We all sang covers so the audience would be familiar with the music. During the judging portion of the show, one girl was told she hadn't mimicked the song's original performance very well.

She told the judge that Charlie Chaplin had once entered a Chaplin look-alike contest and lost. Then she flipped the judges off and walked offstage. She was removed from the show after that.

Those competition shows are so cutthroat. Everyone cares so much. In Qinghai, backstage was like Fight Club. There is a lot of stuff going on off-camera that I don't want to talk about, shady stuff. They tell your parents to cry on cue and then film them. Everything has to be so dramatic. By the end, I just stopped caring.

GK: Do you ever get nervous preforming live or on TV?

Huang: No. When I perform I'm always a bit tipsy. That seems to help. 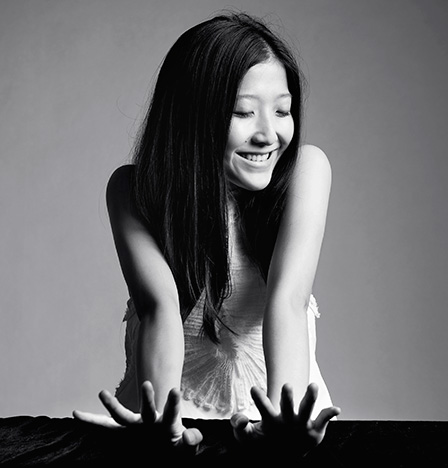 GK: Have you ever forgotten the words to a song during a performance?

Huang: Of course! I forget them all the time — even the lyrics to songs I've written.

GK: Where is your favorite place to sing?

Huang: At home while I give my dog a bath. No, actually I like small, intimate theaters. In those places you can control the atmosphere and get closer to the audience. Festivals are pretty good too.

GK: Have you had any offers to record an album?

Huang: I've had offers from Sony and other labels, but they all want me to record covers. There is no interest in original songs. The music industry in China is at times a tragedy.

GK: What do you mean by that?

Huang: In the US and other countries, people can sing and act into their 50s and 60s with no problem. Look at George Clooney or Madonna. Here in China the window of opportunity is so small. You have to perform all the time and look good doing it. Once your looks start to fade you are done...finished.

On top of that, you have to worry about family. Chinese parents don't want their kids to sing or dance, especially in bars and nightclubs. It isn't reputable work to them. It is extremely hard to break out of those old traditions. My father hates me singing in public. 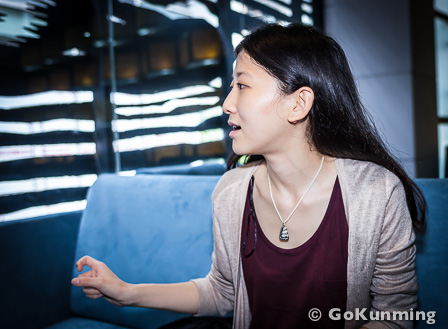 GK: So will you stick with music? What are your plans for the future?

Huang: I think about this a lot. But what it comes down to is this: I try not to worry about yesterday, whether I made mistakes or not. You can't change the past anyway. I can't worry about the future because I can't control it. Maybe tomorrow when I wake up I won't like singing anymore and will try something else. Who knows?

I remember watching her on 'Supergirl' singing competition. I wasn't impress but rather annoyed by her voice and style.