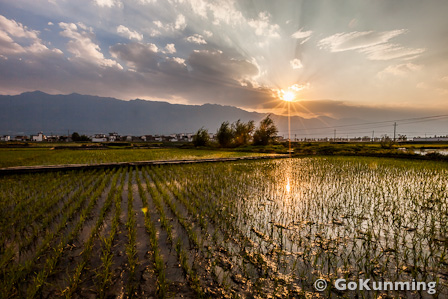 Scientists from the Yunnan Academy of Agricultural Science in conjunction with the Provincial Science and Technology Department, have bred new strains of rice tailor-made to thrive in Yunnan's diverse climates.

All of the 16 new types of rice tested in Chuxiong (楚雄) were cultivated to be drought-resistant in order to grow despite the province's three year drought. Scientists also focused on breeding rice varieties that would help farmers increase yield while decreasing farming and labor costs, according to a report by the Spring City Evening News.

New genetic lines under cultivation sought to produce strains resistant to a variety of factors. Scientists bred rice tolerant of cold, resistant to bacterial infections and leaf blight and sensitive to nitrogen fertilizers.

This last trait may seem counter-intuitive, as Chinese farmers, and farmers worldwide, are using more nitrogen fertilizers to increase yields.

The focus of the scientists at the Academy of Agricultural Science has been to find rice strains that do not grow well in a nitrogen-rich media. This is an effort to force farmers to cut down on fertilizer use province-wide.

Heavy use of nitrogen fertilizers can lead to eutrophication in lakes and streams that drain farmland. This process removes oxygen from a body of water and can lead to the destruction of plant and animal life.

Yunnan's most notorious example of this environmental disaster is Dianchi Lake. Government officials have been scrambling to battle the effects of eutrophication in the lake for the last several years.

Dianchi is not the only lake to suffer from this problem, but it is the largest and most extreme case. Watersheds across the province are also experiencing varying degrees of eutrophication caused by the use of nitrogen fertilizers.

Scientists quoted in the report said they hoped farmers planting the nitrogen-averse rice will not only save money on fertilizer, but will also spare nearby waterways from runoff pollution. A timetable for commercial release of these rice strains has yet to be made public.